What a fabulous day!

It’s not often you get to visit your old town, have your pops treat you to a delicious P.F. Chang’s dinner, then finish it off by seeing your favorite basketball team inch one step closer to the NBA Finals.  It’s even more rewarding when your team beats the greatest player on the planet to do so.

Living only an hour or so from Amway Arena, I could not pass up the opportunity to see Orlando’s playoff run in person.  Father of sportschump and I had planned on going to the game together but as he started a new job the following morning, it was time to go solo.   He’ll be sorry he missed this one as it was a game worth quitting over.

Prior to game time and after leaving dad, I stopped off at my old watering hole, Wally’s, one of the last great dive bars in Florida.  At Wally’s, you’ll hear the jukebox play everything from Prince to Patsy Cline, from Johnny Cash to Jay-Z.  It’s the kind of place where everybody knows your name…  likely because they’ve had to call your ass a cab as you stumbled out of there. 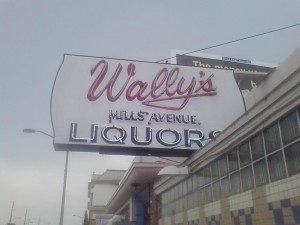 An hour or so later, ticketless but bourbon-full, I looked up at the graying sky and wondered how the inclement weather would affect my opportunity to find a ticket.  Either scalpers would be out there in their little galoshes trying to move tickets as quickly and as sketchily as possible, or they wouldn’t be out there at all.  Fortunately, scalpers follow the same credo as our postal workers, neither rain, nor sleet, nor needy fan.

Just before game time, the rain let up a bit.  Time to make my move.  It stopped just enough for me to get downtown, park my car, and walk to the arena to find my much coveted ticket to Game Four, a pivotal game in the series.  Things were falling into place.  A win for the Magic would put the Cavs on the brink.  A win for Cleveland would deflate Orlando’s Finals hopes.  I was fortunate enough to get into the building for $100, not bad considering I had heard you couldn’t find anything less than $250.  It immediately began to pour once again.  I sprinted inside smiling, raindrops falling on my ticket. 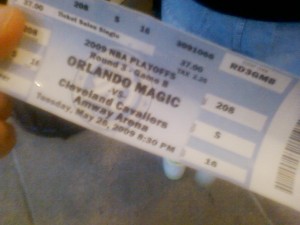 My seats weren’t exactly nosebleeds but let’s just say Stuff, the Magic mascot, would have needed a lenient baseball drug policy to reach my section with his t-shirt launcher.

I was curious to see how the Magic, and their fans, would respond when facing possibly the biggest game in the franchise’s 20 year history.  Prior to tip, the P.A. announcer said that Charles Barkley thought Magic fans weren’t loud enough to be a factor.  Apparently we fail to show the same enthusiasm he did when throwing a fan through a Church Street bar window.

The place was packed with little room to maneuver.  Back in the day, Brotha E, the Don Calvino, Nigeria and I would regularly score lower bowl tickets and wander from seat to seat as we pleased.  But back then, the Magic weren’t two wins away from the Finals.  These are not your daddy’s Magic.  The Barkley quote set the crowd off from the onset and, except for the lulls from the occasional LeBron three-pointer, we were raucous.  I pride myself on my ability to view sporting events impartially but I attended this game as a fan.  And it was riveting.

Orlando got off to a fast start but no lead is ever safe with King James in the building.  He’s averaging 40 plus per this series.  The game was a see-saw battle as it has been all series long.  The Magic led by eight with four minutes left in the first half, only to allow a Cavalier 21-7 run.

The air was slowly starting to come out of the Amway Arena.  Perhaps Barkley was right!

Then Rafer Alston scored seven straight points to start the second half and all was right with the universe.  Cleveland led the entire third quarter with the Magic only down by one going into the final period.  The NBA should have issued a health warning before this series.  Pregnant women or anyone with a heart condition, please abstain from riding this ride.

Another amazing Alston run (seven more points in 2 minutes!) and the Magic were up by eight.  Then again came the Cavs.  A LeBron free throw put Cleveland up by one until Rashard Lewis hit one of those series-saving, “Okay, you can take those whenever you like from now on” three-pointers.  After a Mickael Pietrus foul, LeBron went to the line for two free throws and an opportunity to send the game into extras.  I shouted “YOU AIN’T MICHAEL!!!” at the top of my lungs.  Doubtful he heard me as he calmly sank them both, the last one rattling out…. then in.

As you know, the Magic went on to win an overtime thriller, outscoring Cleveland 16-14 and narrowly avoiding another devastating LeBron three-pointer at the buzzer.  LeBron scored thirteen points in the final seven minutes but it was not enough.  Orlando is now miraculously one win away from the NBA Finals.  Fans poured out of the arena, sifting through the puddles as chants of “Let’s…. Go… Mag… Ic!” echoed for blocks.  The city is in disbelief.  Nobody expected this. 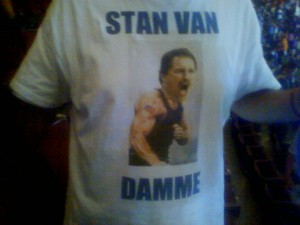 The Master of Panic is now one step away from redemption, his team playing inspired, confident basketball.  Their screen and rolls are perfect.  Their jump shooting is pinpoint.  Their defense is consistent. The Magic had five different players score in double digits Tuesday.  They shot 50% from the floor which means they were getting quality looks… and making them.  And they forced LeBron into eight turnovers.

Orlando, the most unlikely of candidates, is now one win away from their first Finals appearance in fourteen years.  Those in the locker room believe they can do it.  So do I.

37 thoughts on “How Much Would You Pay for Laryngitis? A Fan’s Perspective from the Game Four Rafters”