I was in a deep slumber last week when my phone rang.  It was about 10 am and I was resting comfortably on my couch, trying to pretend the Orlando Magic meltdown the night before never happened.

The Commish was on the other end of the phone.  He had landed tickets to a special Buccaneers function and invited me to attend.  New head coach Raheem Morris would be speaking and the event would certainly be worth writing about.  Little did I know there would also be cheerleaders there.

Chalk Talk with the Tampa Bay Buccaneers is an annual luncheon held by the team which gives fans a chance to meet players and personnel.  It’s kind of like the team’s State of the Union address.  This year’s function was held at the Hyatt Downtown.

With all the off-season moves and acquisitions, a buzz surrounds these Buccaneers, as evidenced by the turnout.  There were several hundred media members, fans, businesspeople and elected officials in attendance.  Oh, and did I mention there were cheerleaders? 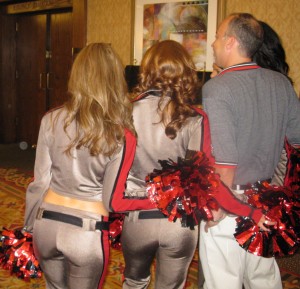 As eager fans filtered into the room, the Commish tried to take some pictures of yours truly engulfed by four Swashbucklers.  Of course, neither photo came out due to a glare in the hallway.  Fortunately, a passerby who we knew happened to take a picture from the backside.  As you can see, Swashbucklers look good from all angles.

The luncheon began after a brief autograph and meet-and-greet session.  To the right of the podium in front of the room sat Bucs G.M. Mark Dominik and Raheem Morris.  To the left, DT Chris Hovan and rookie QB Josh Freeman.  They all met a rousing ovation, after which they fielded questions from the audience.

As expected, this Bucs regime will be big on character.  Both Morris and Dominik stressed the importance of giving back to the community and filling their roster with mentally tough players, responsible guys who “play above the neck.”  Coach Morris promptly rejected the ‘rebuilding’ label, saying it was disrespectful to men like Hovan, Gaines Adams and others the team had already built around.

When asked whether he had selected his starting quarterback, Coach Morris said that answer will be determined on the playing field.  Nobody has been ruled out which means Josh Freeman might actually have a chance to edge out the veterans he’s competing against in Byron Leftwich, Josh Johnson and Luke McCown. 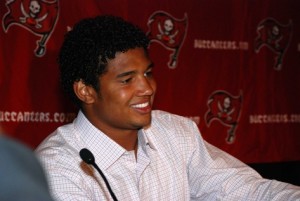 Morris’ faith in Freeman as their QB of the future is robust.  Freeman, the 17th pick of this year’s draft, has found invaluable advice from another famous 17th pick for the Bucs back in 1978: Doug Williams.  Freeman could find a worse mentor.  The Bucs hold lofty expectations for the rookie, mentioning him in the same breath as Tom Brady and Peyton Manning.  That might be a little premature, but it shows the belief they have in their top prospect.  Freeman remained humble throughout and looked like a kid in a library for the first time, continuously soaking up all the knowledge he can.

Coach Morris looks forward to implementing a three-back system (Williams, Graham, Ward) and has promised the new look Bucs will “bash, bash and bash some more” in 2009.  For a Buccaneer team that ranked near the middle of the NFL in rushing yards and yards per attempt last year, a successful ground game will make things easier for whomever they decide to put behind center.

There was also the inevitable mention of Derrick Brooks.  Morris reiterated that his most difficult day on the job came when he had to release the Buccaneer legend.  He stated there would always be a home for Brooks within the organization.  It is still unclear whether Brooks will retire as he hasn’t signed with another team yet.  Brooks was drafted back in 1995 and played all fourteen years for the Bucs, never missing a game.  He was selected to eleven Pro Bowls.

To a chorus of hisses, one spectator asked whether the Bucs had any interest in signing Michael Vick.  Dominik fielded the question professionally, answering that the Bucs will always do their due diligence when it comes to any acquisition that has the potential to improve the team.  He concluded the Bucs had no interest in Vick and that Josh Freeman is their quarterback of the future.  His response was followed by a roomful of applause.

The future looks bright for this Buccaneers franchise but of course they’re still in honeymoon mode.  They haven’t lost any games yet.  Coach Morris’ smile is infectious and so is his work ethic.  The Bucs will look to win and win now with no excuses.  Early reports from training camp indicate the revamped roster is buying into Morris’ philosophy.  We’ll see if that translates into wins on the gridiron.

29 thoughts on “Chalk Talk with the Tampa Bay Buccaneers”