Shaq to the Cavs!  Vinsanity to the Magic!  Jefferson to the Spurs!  THAT is why I love the NBA come draft time.

The NBA Draft doesn’t receive nearly the hype or publicity that the NFL does.  Heck, ESPN promotes the NFL Draft months ahead of time.  Football fans plan their entire weekend around the event.  Mel Kiper goes months without sleep.  And while NBA fans on draft night don’t show quite the same fervor as their pigskin brethren, rest assured Tyler Hansbrough still heard heckling from the rafters.

While baseball and hockey drafts come and go in relative obscurity, the NBA draft is the only thing that comes close to matching the regalia of the NFL.  It’s kind of like an NFL Draft Lite.  It doesn’t take the entire weekend; it’s over in one evening.  The 2009 NFL Draft had 256 picks, the NBA has 60 picks.  Of course the nature of the sports are different, but by the time the NFL Draft is finally over, Chris Berman and his cast look like they’ve been in the back of a van on a police stakeout, eating nothing but donuts and coffee for weeks.  The NBA Draft doesn’t require that intense of an investment.  It’s just easier to stomach.

This may come as sacrilege to hardcore NFL draft fans but the sport also does not allow for blockbuster trades around draft time to shake up the league.  Fans rarely see huge names shipped from one team to another.  The NBA, on the other hand, is a different animal altogether and this week was no exception. 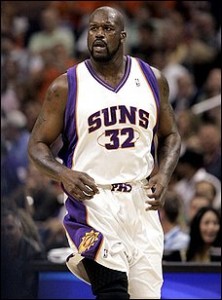 Wednesday night, the Cleveland Cavaliers enticed their fans by landing the game’s biggest name and biggest player, Shaquille O’Neal.  The San Antonio Spurs reminded everyone they are no longer an afterthought by dealing for Richard Jefferson.  Only hours before the draft kicked off, the defending Eastern Conference champion Orlando Magic surprised everyone by trading for Daytona native Vince Carter.  That makes three contenders dramatically shuffling their roster one day before the draft to inch closer to a championship.

The NBA is every fan’s fantasy league, where big trades happen.  You would never see NFL teams deal Tom Brady or Peyton Manning in their prime.  The league’s salary structure doesn’t allow for it.  But now fans get to see the Big Cactus play for his fourth professional team and very possibly contend for a title once again.  By the time it’s all said and done, Shaq will have played with Kobe Bryant, Dwyane Wade and LeBron James.  The only other players that can say that are the recent US Olympic gold medal champions.  NBA junkies are already fired up to see what this dynamic duo can do against the likes of the Lakers, Celtics, Nuggets and revamped Spurs and Magic.

A successful draft is also more important to a basketball team than in football.  A key NBA prospect can dramatically alter the course of an NBA franchise.  For example, since 1979, 11 number one NBA draft picks (Magic, Worthy, Sampson, Olajuwon, Ewing, Robinson, O’Neal, Iverson, Duncan, James and Howard)  have led the team that drafted them to an NBA Finals.  Over that same time period, only three top NFL picks (Aikman, Manning and Manning) have done the same.

Call it a personal preference but in this day and age of instant gratification, I’m perfectly okay with not seeing who the Browns selected with the 195th pick of the draft.  Give me two rounds, one night and I’m out.

31 thoughts on “SACRILEGE!!! Reasons why the NBA Draft is better than the NFL Draft”