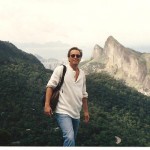 I spent one glorious summer in Rio de Janeiro many years ago.  While still in graduate school, I was fortunate enough to have been awarded a scholarship to study Portuguese overseas.   Mine was the typical exchange program where you live with a host family and take classes at a local university.  Technically, I was there to conduct thesis research, and I did, as most of the summer was spent ‘familiarizing myself’ with Brazilian culture.

My timing could not have been more perfect.  The year was 1994 and the country was smack dab in the middle of World Cup fever.  As most of us know, Brazilians eat, sleep and breathe soccer.  The game is so ingrained into their culture that at certain times of the year, nothing else matters.  Not the economy, not poverty, not pollution.  Soccer unites their nation.

Packers, Eagles and Giants fans?  Do you think you’re religious about your team?  Guess again.  You Gator, Sooner, Buckeye and Notre Dame fans out there think you hold a candle?  Nuh uh.  The entire nation of Brazil gathers together when World Cup rolls around.  I was lucky enough to experience that first hand. 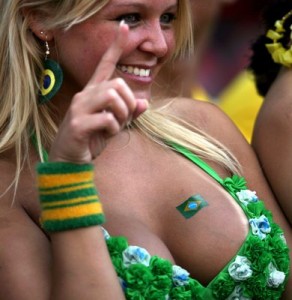 One day I accosted a group of four beautiful Brazilian women chatting energetically while drinking beers at a beachside bar.  Consider it the Brazilian version of ‘Sex and the City.’  The foursome was engaged in an in-depth conversation… about soccer.  Where in the United States would you ever see that?

To further put things into perspective, the Horseshoe in Columbus, OH fits 102,000 screaming fans.  Neyland Stadium in Knoxville seats 105,000.  Michigan Stadium holds 108,000.  While in Rio, I saw a regional soccer game at Estadio do Maracana.  Maximum capacity 200,000!  Brazil is scheduled to host the 2014 World Cup.  Think they’ll have a home field advantage?

Prior to every World Cup game that summer, I was warned to have all beer, food and party accessories ready ahead of time for everything in Rio shut down at first kick.  I didn’t believe it until I saw it with my own eyes.  During a match, there was not a storefront open or a vehicle on the street.  Good luck finding a taxi.

The entire country gathered in their living rooms with family and friends with ice cold Brahma and feijao aplenty, remaining glued to the set for the entire game.  These are not your fair-weather fans.  When Brazil scored a goal, the city erupted.  Shouts of pleasure echoed through the windows.  Celebration ensued with each victory.

The United States hosted the World Cup that year.  Ironically, Brazil played the U.S. on July 4th.  I remember that date specifically because my host family threatened to kick me out of their apartment if the U.S. pulled off the upset.  Needless to say, I was rooting for Brazil.

That 1994 Brazil team featured all-time greats:  Romario, Bebeto, Taffarel and an 18-year old named Ronaldo.  Taffarel, the goalie, consistently received the harshest criticism from both media and fans.  That was until he blocked Italy’s game-tying goal in penalty kicks to bring home the title.  He immediately became a national hero.

When it comes to World Cup history, Brazil dominates nearly every statistic: championships won, games won, goals scored.  Every other country is a distant second.  Soccer in the U.S. can never reach the importance it garners in Brazil or in other areas of the world.  It’s ingrained and generational.  Even though we all play soccer as children, most of us switch to another sport we’re more interested in like baseball, basketball or football.

For whatever reason, most Americans don’t have a passion for soccer.  Not enough scoring, no viable professional league, the inability to use one’s hands, whatever the reason.  We just don’t have the appetite for it no matter how hard US Soccer tries to encourage us to pay attention. 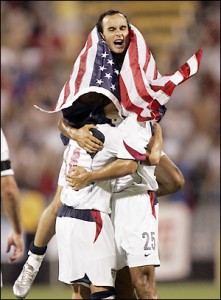 That was until last week when the U.S. almost pulled off an upset of international proportions.  In the final game of the FIFA Federations Cup, the US led Brazil 2-0 at halftime.  David was inconceivably about to slay Goliath.  Then the Brazilian juggernaut scored three goals in the second half to squash any hopes the US had for winning its first major international competition.

I found myself once again glued to the television as if it were 1994 revisited.  It was refreshing to see others interested in the match as well.  I watched the first half while exercising on an elliptical machine at my local YMCA.  When Landon Donovan scored the second goal of the game, I heard a few random shouts from within the gym over my blaring iPod.  Not bad.  Now just imagine how Brazil was rocking when they took the lead for good.

US Soccer put forth a valiant effort in their tune-up for next summer’s World Cup.  They turned a lot of heads and more fans will assuredly be watching.  It’s unreasonable to expect them to equal their recent success but at least now this team won’t be overlooked.

Late one night back in 1994, the Brazilian team announced they would host a parade. The Cariocan (those from Rio) players would be bringing the trophy around for all to see.  We stayed up all night celebrating the victory as fans played a variety of percussive instruments.  The beats were infectious.  Fans rushed the parading buses with players waving from atop as the parade route ran through Copacabana and Ipanema.

It’ll be a long time coming before the United States ever brings one of those home.  Do you think we’ll even notice?

32 thoughts on “Fourth of July in Brazil puts U.S. Soccer in perspective”