I coached youth sports a few years back.

I was living in Orlando and decided to volunteer some of my spare time at the downtown YMCA.  I coached boys 11-13 years old and can say without hesitation, it was one of the most rewarding experiences of my life. 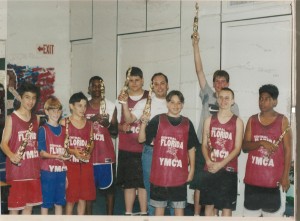 I’ll spare you the details of how my team ended up winning the championship or how I wrote a letter to our team captain’s school headmaster asking to allow him to play in the championship game or about how I called several last-minute full-court presses in the title game to create turnovers and uncontested layups to win us the title or how I fought back the tears as I announced each of my players by name during the trophy ceremony.  Good screenplay, huh?

As my kids would line up for opposing teams’ free throws, they’d make fun of me as I shouted frantically from the sideline “WHO’S REBOUND IS THIS?”  They’d laugh, shrugging, answering from across the floor “Mine, coach.”

The kids were young so I didn’t focus on extensive or complicated play-calling, just the basics: pick-and-rolls, boxing out, etc.  There was no assistant coach, just me.  We held one practice during the week and then the games on Saturday.

The reason I bring all this up is because, during a recent meal with my folks in one of Tampa’s finer Cuban establishments, I ran into an old coach of mine.

Growing up playing athletics, I never really had any good coaches, from little league all the way through college tryouts, from junior varsity basketball on up as well.  In fact, it’s safe to say I learned more about how NOT to coach from this motley cast of characters.  My high school baseball coach/sociology professor was a personality but he was definitely the exception rather than the rule.

There was one man, however, who gave of himself completely.  He was an elderly gentleman even back then, but having seen him again the other day, over twenty-five years later, it was as if he hadn’t aged a year.  His pharmacy, Lefler Drugs, sponsored our team at Tampa’s Skyway Park back in 1981.  As is often the case in little league, his son was on the team, but Coach didn’t play favorites.  He was supportive, friendly and educational.  He took time when you had a question and was never condescending.  He didn’t yell, he taught.  Heck, we were 12 years old at the time.  We didn’t need a drill sergeant, just a baseball coach.

The question is not whether he remembered me so many years later.  I only played in that league for a year.  But for ten minutes, as he was leaving the restaurant, we both looked back on that time fondly, as my mom smiled proudly and snapped photos in the background.  To this day, she and I still joke about his “Be A Hitter, Son!” words of encouragement as if we were quoting a line from our favorite movie. 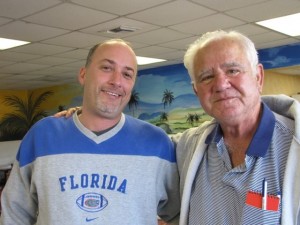 I told Coach Lefler during our brief conversation that I too had given of my time and coached youth basketball, after which I saw an immediate smile light up his face, almost knowing he was partially responsible for paying it forward.

Apparently, there are several local lawsuits pending, one in which parents sued a third base coach for sending a runner, their son, who went on to break his ankle in a collision at home plate.  I was stunned.  Coach mentioned there were similar cases as well, so rather than continue to give of himself to the community, he decided to quit coaching for good.

I’m no parent and if I were, I would definitely take all necessary precautions to ensure my children’s safety.  But I would also understand that lumps, bumps and bruises are part of growing up and playing athletics.  The fact that a man like Emilio Lefler no longer plays a role in teaching tomorrow’s youth for fear of litigation is a sad statement as to what we have become.

Coaching is an invaluable part of our growth process as human beings.  Coaches mold us, they mentor us, they provide us with an environment outside the household that breeds sportsmanship, competitiveness and fair play.  Coaches can leave us with invaluable memories of our youth.  Think back to how many fond, childhood moments were spent on the diamond, basketball court or gridiron.

We now enter an era of political leadership with a renewed emphasis on community.  For those of you who have never volunteered time to coach or teach, I highly recommend you do so and understand and appreciate what imprint you will have on tomorrow.  It might just provide you and our future with memories that last a lifetime.