Fishing is a sport.  Like golf, it is also a popular, leisure activity here in the Sunshine State.  I have a good number of friends who over the years, have consistently invited me to go fishing with them, although I’ve never really gotten into it for reasons about to be discussed.

I respect fishing and those who enjoy it.  I have several friends with boats who love to fish.  My former boss used to actively compete for sailfish and fare pretty well for himself.  He even had one of his prize catches hanging in the office.  ESPN airs that fishing show every Sunday morning that I bear through until The Sports Reporters come on, those rare weekend mornings that I’m actually out of bed.

My patented response when people ask me to go fishing is that I can buy my fish at the local supermarket.  In those nice little display cases, they have tuna, salmon, grouper, whatever I want, and I don’t have to gut or scale the darned things.  My friends have explained repeatedly that fishing is about camaraderie and competition and drinking and getting away from things and more drinking… and I’m all for that.  Fishing just has never floated my boat.  No pun intended. 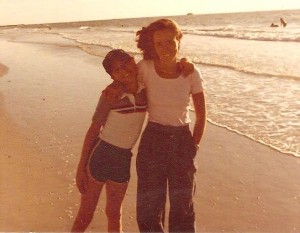 Many years ago, my mom and I moved from New York City to Tampa, Florida.  I was about 12 years old and, as I was raised by a single mom, she thought it might be a good idea to take me out and do some ‘guy things.’  Even then, I was reluctant.  When she mentioned fishing, I asked her if we would be able to catch tuna fish, nova, or fish sticks, a line that still gets tossed around at family dinners.  We were from Manhattan.  The only fish I knew was the smoked salmon we bought from Zabar’s.  That was fresh, tasty and served up right there for you.  Why go through the trouble of having to fish it out of the ocean?  Plus my aunt had taken me to see “Jaws” at an early age.  Jarring.  At six years old, I had my head buried in her lap the entire movie.

So one day, mom bought a couple of cheap fishing poles and we headed out to the Courtney Campbell causeway.  I forget what type of bait we used but I don’t see either of us hooking worms or shrimp heads or whatever other items fishermen use to bait a hook.  She even bought one of those K-Mart special fish kits even though we didn’t really have anything to put in it.  We didn’t know what we would have done had we actually caught a fish.  I sure as hell wasn’t going to cut the thing open and I’m pretty sure she wasn’t either.  We probably would have just tossed it back into the gulf, after of course reminding the little fishies who was boss.

So we stood out there one beautiful, Florida weekend day, casting out our reels or whatever the proper terminology is.  As an undersized little leaguer, I obviously tried to cast my hook out as far into the peninsula as possible.

That was until I caught something… and it wasn’t a fish.  As my cast flew through the air as hard as I could muster, a low-flying seagull, who was apparently going after the same fish I was, flew right under my reel.  And got caught.

Once hooked, the seagull started to make a horrible sound.  The seagull’s wing, the line and I were one.  I stood there in shock.  It was my first time fishing and I didn’t know what to do.  Was this normal?  My mom stood by my side, similarly unaware of how to handle this.

As the cars whizzed by us on the causeway, my first reaction was to tug on the fishing pole in an effort to free the poor bird.  Bad idea.  The seagull started squawking louder.  Even though seagulls are glorified rats with wings, I still didn’t want to kill the poor thing.

As rookie fishermen, we were tremendously ill-prepared.  We had no scissors to cut the line and no magic lamp to turn back time.  We stood there trying to figure out how to get ourselves out of this mess.  As I recall, we were finally able to free the injured bird from my fishing wrath although many of the details have been subconsciously removed from my memory.

It was a miserable day, a failed experiment, her good intentions of a ‘boy’s day out’ gone horribly wrong.

So now, I don’t fish.  And neither does she.  Understandably.  We’ve gone back to buying our fish from the supermarket.  Don’t get me wrong.  I love fish.  I just don’t love TO fish.

When it comes to sports, I’m a meat and potatoes man.  Give me my baseball, my basketball, my football.  Mix in some golf, boxing and tennis and I’m a happy camper, even though I don’t like camping either.

I’ll go ahead and leave the fishing to those who know what they’re doing.  After all, I wouldn’t want to harm any more seagulls.