In Lake Tahoe, a casino waitress alleges that a two-time Super Bowl champion quarterback forced himself on her in a hotel room.  In another hotel room elsewhere in the country, someone sneaks a video camera through a keyhole to record a female sportscaster as she strolls around her room.  In Alabama, a reporter asks a former Heisman trophy winner about his sexual behavior.  In Kansas City, a well-respected journalist faults a female tennis champion for being too fat.

Somewhere we have crossed the line.

In this country, as in many others around the world, we deify the modern athlete, often to a fault.  Tiger Woods, Michael Jordan, Kobe Bryant, LeBron James have become larger than life, their images recognizable worldwide.  Some criticize the professional athlete for not using their status as a tool to speak out on certain issues but often it’s because they don’t want to subject themselves to extra media attention.  It’s bad enough they already live their lives with no privacy and microphones repeatedly jammed in their faces.  It’s surprising that more star athletes don’t become hermits, but such is the price of fame and fortune. 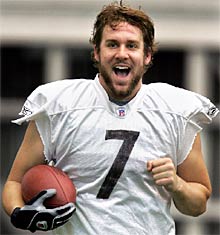 Last week, Andrea McNulty became the latest to thrust herself into infamy by accusing Ben Roethlisberger of raping her in a Lake Tahoe hotel room over one year ago.  According to McNulty’s testimony, Roethlisberger forced himself on her in a hotel penthouse, yet she never reported the incident for fear of losing her job at a local casino, owned by one of Roethlisberger’s friends.  Roethlisberger has since denied these allegations, calling them “false” and “vicious,” but who’s to know for sure?  Once accusations like this are out there, they’re out there.  Kobe Bryant still has difficulty shaking the incidents of Eagle, Colorado that occurred six years ago.  Mike Tyson served three years in prison for allegedly raping a beauty contestant in 1992, marking the bitter end of an embattled career.

Similarly, the image we hold of Big Ben, Super Bowl champion and one of the faces of the NFL, may be tainted forever.  As if the NFL needed more image problems with the impending return of Michael Vick.  The bottom line is we don’t know what happened in any of those hotel rooms.  The only people who know the truth are the two involved.  We’re left to judge reality based on a jury’s decision or whatever settlement is reached between the two parties.  If Roethlisberger and McNulty do settle out of court, is that an admission of guilt or an effort to avoid any further damage to his image?  Either way, that’s some expensive room service.

Once again proving nothing is sacred, someone recently recorded ESPN female sportscaster, Erin Andrews, as she walked around her hotel room naked.  This person’s identity has yet to be revealed.  Instantly, the video became an internet craze as fans and perverts alike scoured every website they could find for a glimpse at the naked Andrews.  I’m all for looking at beautiful women.  In fact, the more the merrier.  But not when it’s against their will or without their knowing.  Can we get a reality check and then find out who recorded Andrews so HE can face the court of public opinion for his actions?  As retribution, I’d suggest filming him naked and putting that on the internet.  I’m just not sure he’d have the same following.

In a week that’s supposed to celebrate the upcoming football season, one ‘journalist’ had the nerve to ask Florida Gators QB Tim Tebow, not about returning for his senior season or his quest for a third national championship, but rather about…  his sex life.  Is that really a football question?  Can we not revoke this person’s media credentials?  Tebow is the face of college football.  Shouldn’t his private life remain exactly that?  For that matter, shouldn’t everyone’s?  Since when is an athlete’s sex life a matter of public record?  The Tony Romo/Jessica Simpson, Tom Brady/Giselle Bunchen, Tony Parker/Eva Longoria and David Beckham/Posh Spice romances have become tabloid material over which media and paparazzi salivate.  Personally, I’d much rather read post-game analysis than a report on who’s zoomin’ who.  I know sex sells, but so does football.  Let’s keep it that way. 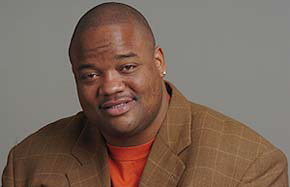 To top it all off, in a recent FoxSports.com article, well-respected, journalist (at least until now) Jason Whitlock, in an apparent effort to ruffle some feathers, did exactly that.  Shortly after Serena Williams won Wimbledon, her 11th major championship, Whitlock criticized Williams for her lack of will to win, attributing it to her “oversized back pack.”  Yes, that’s right.  He referred to her derriere in the article. Whitlock goes on to write Serena can’t “fill out her size 16 shorts without grazing at her stall between matches.”  Did Whitlock at least think twice before proffering something like that?  It’s groundbreaking journalism like this that encourages bloggers to speak their mind.

Since when is it appropriate to discuss a woman’s weight at all, never mind make it a matter of public record?  In the article, Whitlock questioned Serena’s determination, calling her an underachiever.  Might not her will to become the best tennis player ever have less to do with her weight and more to do with the fact that she’s often competing against her sister?  Not exactly duel to the death material.  It’s not like Venus Williams is an easy out either.  If Serena’s heart is more into fashion than it is her sport, that’s perfectly okay.  It’s not for us to decide.

Certain athletes like Terrell Owens and Chad Johnson want to let you into their personal lives.  T.O. has a new (and rather unwatchable) reality television show.  Ocho Cinco has been tweeting like a madman, updating his fans on his workouts and whereabouts.  Unfortunately for Owens and Ocho, no one’s interested.  Other athletes, however, would rather keep their personal lives private.

Again, somewhere we have crossed the line.  Just like you or I, the professional athlete has a right to privacy that should be respected.  Rape accusations are serious business.  If Roethlisberger is guilty, then he deserves to rot.  Likewise, if McNulty is making it up, then she deserves the same.  Other than being publicly ridiculed, what’s to prevent anyone from accusing a high-profile professional athlete of wrongdoing?  The rewards of a huge monetary settlement often outweigh the risk.  We will never know what went on in that hotel room.  We are left only to assume.

What kind of human being records a woman without her consent and then releases it for public consumption?  With one man on the verge of doing something never before accomplished in college football, we’re more curious about his activity, or inactivity, in the bedroom?  How is a woman’s weight newsworthy and what does it have to do with her will to win?

There’s an understood line that should not be crossed by fans or media.  Remember that the next time someone goes rummaging through your belongings, judges you or reveals one of your most intimate secrets.  And we wonder why more athletes don’t stop for autographs or interviews.  In all honesty, would you?