“The banishment for life of Pete Rose from baseball is the sad end of a sorry episode. One of the game’s greatest players has engaged in a variety of acts which have stained the game, and he must now live with the consequences of those acts. By choosing not to come to a hearing before me, and by choosing not to proffer any testimony or evidence contrary to the evidence and information contained in the report of the Special Counsel to the Commissioner, Mr. Rose has accepted baseball’s ultimate sanction, lifetime ineligibility.”

Statement by then Commissioner
of Baseball, A. Bartlett Giamatti,
August 24, 1989

It’s been twenty years since late baseball Commissioner Giamatti uttered those fateful words.  And during that period, few sports stories have drawn as much media attention or polarized a fan base as the Pete Rose gambling scandal.  Hardcore Cincinnati Reds or Pete Rose fans will have you believe that Rose, because of his performance on the field as a player, should be allowed admittance into the Hall of Fame.  Rose was undoubtedly one of the greatest hitters of his generation.  He holds countless major league records.  His on-field legacy is undeniable and no one can take that away from him.  Those opposing his induction argue that Rose, as a major league manager, wagered on the outcome of baseball games, including those he was involved in, and thus violated the most basic and ethical rules of the sport.  As it stands right now, Rose is still banished from the sport and, despite recent rumors, there are no indications he will be invited back any time soon.

The Rose story first broke in 1989, when baseball officials announced they were looking into alleged gambling violations by the former Reds superstar.  At that time, Rose was managing in Cincinnati.  In May of that year, Commissioner Giamatti received the infamous Dowd Report, a 225-page document outlining Rose’s alleged illegal activity.  In August, Rose agreed to a lifetime ban, all the while admitting he never bet on baseball.  In 1991, members of baseball’s Hall of Fame voted unanimously to keep Pete Rose off the ballot in his first year of eligibility.  In 1997, Rose applied unsuccessfully for reinstatement. 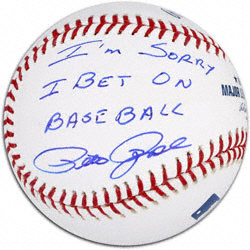 After lying to the public and his fans about his gambling habits for over a decade, Rose has in recent years come forth and admitted he did, in fact, bet on baseball.  In 2003, Rose, after years of deception, admitted that not only did he bet on the Reds every game, but he would wager as much as $10,000 per game on his team to win.  He said he did so because he always felt his team would be victorious.  Rose still claims he never bet against his team.  The Dowd report never uncovered any information indicating Rose bet against the Reds.

“Any player, umpire, or club or league official or employee, who shall bet any sum whatsoever upon any baseball game in connection with which the bettor has a duty to perform shall be declared permanently ineligible.”

While we currently live in a society where professional athletes run wild, abuse (or allegedly murder) their spouses, physically confront fans, engage in random gunfire, use illicit or performance-enhancing drugs, house illegal gambling rings, make inane racial commentary, drive drunk and barter for tens of millions of dollars in annual salary, we are somewhat to blame for their behavior.  It is we the fans who put these athletes on a pedestal, then complain when they fail to meet the standards we set for them.  Although gambling pales in comparison to some of these aforementioned violations, it is still illegal in most parts of this country. 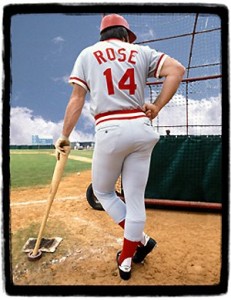 It is inarguably immoral to gamble on an event of which you can directly affect the outcome.  It is cheating.  Bottom line.  Just as insider trading is illegal on Wall Street, placing a wager on a professional or college sporting event when you are a direct participant is unethical.  Pete Rose did just that… and did so consistently.  Lying about it was just the icing on the cake.

Baseball’s Hall of Fame is reserved for the elite of the elite.  It is much more difficult to get into than its counterparts in Springfield, Massachusetts and Canton, Ohio.  And despite being the all-time hit king, major league baseball has done the right thing by continuing to exclude Pete Rose from induction into Cooperstown.  The rules are explicit.  He knew about them and he broke them.  To make an exception for Rose, simply because of his talent as a player would be inconsistent and inappropriate.  It would reward a man for cheating and lying.

The Hall of Fame carefully selects its members based on “the player’s record, playing ability, integrity, sportsmanship, character, and contributions to the team(s) on which the player played.”  Although Rose wagered on baseball as a manager and not as a player, you can not separate the ‘integrity’ and ‘character’ from the Rose the player and Rose the manager.  These men are one and the same.  To admit into the Hall Rose would be the equivalent of telling baseball fans nationwide that it is okay to cheat, as long as you’re good at what you do.  We can not redefine ‘permanently ineligible’ for Mr. Rose just because he holds the all-time hit record.

Pete Rose let down his teammates, his fans and himself by gambling on baseball.  For that indiscretion, he is now paying the price of a lifetime as Rose will not, and should not, be allowed to go to the window and collect that final winning ticket.

40 thoughts on “The Pete Rose debate rages on”