In light of my attending the Sox-Rays game at the Trop the other night, I thought I’d repost an oldie (Sep. 16, 2008), but definitely a goodie about a similar game I saw last year.  The baseball season was coming to an end and the Red Sox and Rays were battling for the supremacy in the AL East.  The Red Sox won the game in question with the Rays winning the next two and ultimately reaching the World Series.

But the story does not involve the game in question so much as the inexcusable actions of one particular fan.  Hope you enjoy.  As always, there’s a lesson to be learned…

In my current quest to work as little as possible while also attending premier sporting events throughout Florida, I decided to withdraw a small portion of my dwindling bank account and scalp a ticket to the Monday night Red Sox-Rays game.  Despite having lived in Tampa, I had never been to Tropicana Field.  But let’s be honest, prior to this season, there was never really a good reason to go.  Since their inception, the Rays have never finished in anything other than last place in their division.

This year, however, the Rays have flipped the script.  For a good part of the season, they held the best record in baseball, an even more significant feat if you consider they’re doing so in the American League East.  No matter how often Beantown would make an attempt to narrow the gap, the Rays consistently maintained a comfortable lead.

That was until last night.

In front of nearly 30,000 fans (most of them cheering for the Sox), the Rays soiled the proverbial bed.  The Sox had not won in Tampa Bay all season long.  It’s safe to say they saved the best for last with a 13-5 romp of the Rays.

I was fortunate enough to scalp primo seats, twenty rows up along the first base line, not too far above the Rays dugout.  I even showed up on time, or so I thought, entering the stadium in the bottom half of the first inning.  Much to my dismay, as I was in line to purchase my first of several beverages, the person behind me (a Sox fan from Connecticut… imagine that) informed me that I had already missed a David Ortiz three-run homer and Mike Lowell solo shot.  It reminded me of the time my buddies and I showed up late to a Bucs-Lions game back in the day.  At the start of the second quarter, we walked in to see Barry Sanders running rampant all over the old orange and leading by a score of 21-0.  An early bird, I’ve never been.

Fortunately, the rest of the game didn’t lack for offense.  At one point, the Sox had five home runs on only six hits as the Boston lineup treated Rays’ ace Scott Kazmir like their own personal ragdoll.  Nine runs, all earned, in three innings pitched.  Not exactly the momentum the Rays were looking for heading into October.

But the purpose of this post is not to provide the reader with an American League East breakdown or to predict the upcoming pennant races.  Rather, I saw something intriguing and quite disturbing at the ballgame last night.  One fan’s out-of-line behavior that raises an interesting question.

The word ‘fan’ is short for fanatical.  Its meaning is self-evident.  Many franchises are closely aligned with their fans.  They take on a persona.  For years, long-suffering Red Sox fans had accepted their role as the almost ran’s.  But with their recent success, winning World Series in both 2004 and 2007, there’s a new breed of confident Red Sox fan gloating around.

But as you might think, this is not a story of an obnoxious Sox fan, but rather an ornery and absolutely inexcusable Rays fan.

Read on…. I promise you will not believe this. 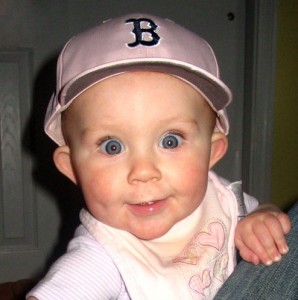 Around the fourth inning, a woman was carrying her newborn up the steps, most likely to use the restroom or perhaps change a diaper.  The child could not have been any more than 18 months and was dressed in cute, little Sox gear.  About three rows down from me, to the right and across the aisle, an elderly Rays fan who couldn’t have been any older than sixty-five, sat with his wife.  As the woman toting the baby climbed the steps, she eventually passed by his row.  As she did so, the man stood up, took off his Rays cap, turned it logo-side and shouted to the baby “Get A Real Hat!”  Okay, now… re-read that last paragraph.

A Rays fan… heckled… a baby!  As if the eighteen-month old contemplated which color hat would better match his Huggies before leaving the crib.  I’m pretty sure the kid couldn’t even say hat, never mind put one on by himself.  As the mother continued climbing the stairs, seemingly unaware or perhaps totally in shock that this man had just accosted her baby, I asked her in disbelief, “Did that man just heckle your baby?”  She replied half-amazed “Yeah, he did!”  It was definitely something out of the Twilight Zone of sports.  And I thought Partykiller trying to pick a fight with a guy in a wheelchair at a Florida-Kentucky game was bad.

Then of course, the always classy, random Red Sox fan had to get his two cents in by shouting back at the guy “Talk when you get a ring,” as if the polish still wasn’t wet on his own hardware.

Clearly this man’s behavior was inexcusable, if not therapy-requiring.  However, his wife sat by his side, silent, and didn’t so much as give him a second look.  No tug on his shirt, no “Is this really the man I married?” glance, no promises to withhold sex for a month for his actions.

Yes, fans get out of hand.  In no way was this man violent or threatening but there’s a fine line between fanaticism and stupidity.  And this man crossed it.  Look, I’ve been known to tip back a few and throw things at the television screen when my team isn’t living up to expectations.  I’m as big a sports fan as the next guy.  But regardless of whether the team I root for wins or loses, I pride myself on being a good sport, shaking the hand of a competitor after the contest and saying “Good game.”  After all, isn’t that what we were taught in little league?  Perhaps this man forgot that lesson.  In my opinion, his partner is equally to blame.  Control your husband, lady.

Remember guys, when your woman gives you a tug when you’re out of line, don’t just blow it off.  She probably has your best interest at stake.  Here’s hoping she does.  I’m pretty sure had I heckled a baby, my date, had I had one, would have been up in my grill.  And sex would have been unquestionably denied.  After all, what’s so attractive about a baby heckler anyway?

13 thoughts on “How NOT to act at a sporting event, vol. 1: Baby Taunting”