Narcissism is defined as having an excessive love or admiration for oneself.  The word comes from the mythological Narcissus who fell in love with his own reflection in a pool of water and then drowned after staring at it so much.  Good lesson to be learned, huh?

The modern, professional athlete is a special breed.  They have to be in order to excel amidst the stiffest of competition.  Along with the fame and fortune that comes with being a superstar athlete is the inevitable paparazzi of the media.  It’s the price they pay.  Microphones are stuck in their faces daily and they’re forced to answer a series of inane questions from media members who think they know more about the sport than they actually do.  High profile athletes are often unable to go out in public without fans gawking at them, asking them for autographs and invading their privacy.  But there is a fine line between humility and boastfulness, between knowing that you’re good and insisting that everyone else knows you are.

Many athletes handle fame and riches modestly and with class.  Tim Duncan comes to mind.  Brandon Roy scored 50 points in a game last season then credited his teammates for his performance!  But several athletes take it to another level.  It is all about them.  They can’t get enough face time.  They crave the attention.  They become standoffish, arrogant and do more to turn people away rather than gain new fans.  Often that comes at the expense of the team.  Rather than be grateful and respectful of their fan base, their teammates and the sport itself, their attitude is emblematic of what’s wrong with professional sports.

So get your popcorn ready.  Here’s a countdown of the five most arrogant, narcissistic athletes playing professional sports today: 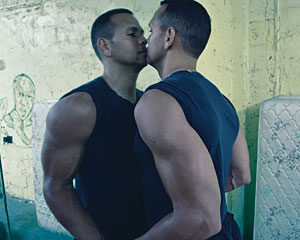 5) ALEX RODRIGUEZ – A-Rod redefined baseball salaries when he signed with the Yankees for $275 million.  A-Rod makes so much money, he could singlehandedly jump start our nation’s economy with one week of spending frivolously.  Long considered one of the top talents in the game, Rodriguez continues to put up stout numbers, except in October.  A-Rod has won two MVPs while in pinstripes but has yet to bring a title to the Big Apple.  His recent relationship with Madonna was nearly inexplicable.  He’s 33, she’s 50.  What?  Betty White wasn’t available?  Not that I have a problem with older women, particularly if they’re multi-millionaires but he probably could have done better.  Madonna’s served as muse to (many) other famous athletes like Dennis Rodman, Brian Shaw and Jose Canseco, so we’ll see if that will get him out of his post-season funk.  Unfortunately we never got the chance to see Madonna, Brian Cashman and Hank Steinbrenner voguing together in the new Yankee Stadium sky boxes.  A-Rod’s Details photo shoot showed images of him kissing his reflection in a mirror.  ‘Nuff said.

4) STEPHON MARBURY– While Stephon’s clothing line that provides affordable apparel in an overpriced market is a worthy cause, this is still a man who sat on the sidelines for the New York Knickerbockers and refused to play while collecting millions of dollars from the franchise.  Where can I find a job that pays me to do nothing?  Memo to self: check monster.com for high-paying inactivity.  Even Marbury’s teammates have called him out, labeling him as the proverbial, locker room cancer.  Prior to destroying the Knicks clubhouse, he did the same in Minnesota and Phoenix.  Last year, he was seen at a Lakers-Knicks game AFTER BUYING A TICKET.  Think about that.  He was ON THE KNICKS ROSTER.  His Celtics experiment didn’t work either.  Name one other industry where a person can refuse to work and still get paid.  He’s even been webcasting himself.  Stephon still considers himself to be the greatest talent to emerge from Coney Island.  It’s unfortunate he’s the only one that feels that way. 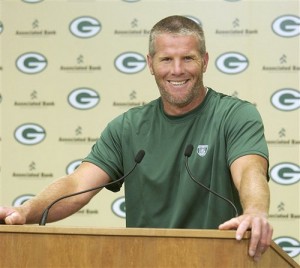 3) BRETT FAVRE – On again, off again.  Foxsports recently reported Favre may return… again.  Lovely.  Football fans will now be subjected to another several weeks of ‘will he, won’t he’ when it comes to Favre returning for another year.  Many Green Bay faithful have to secretly be thankful they don’t have to be glued to his every press conference waiting on his ‘final’ decision.  Favre’s had more farewell tours than The Who.  It’s bad enough we’re submitted to his incessant Wrangler commercials.  Does anyone really care whether he returns?  Michael Jordan didn’t retire this much.  Can’t we just look forward to the football season?  Brett, spare us all of the melodrama of your indecision.  Make your call to stay in the game or retire and be done with it.

2) CHAD “OCHO CINCO” JOHNSON – Wide receivers (see Keyshawn Johnson, Cris Carter and Michael Irvin) have traditionally been the most boastful athletes and Chad Johnson is no exception.  This is a man who legally changed his name to a number so that he could put it on the back of his uniform.  He has singlehandedly led an up-and-coming, talented Bengals team back to the bottom of the National Football League standings.  Known for his antics and touchdown celebrations, while on the sidelines of one game, he once wore a large yellow jacket with ‘Hall Of Fame’ written on the back.  Awfully pretentious considering his career has taken a considerable downturn.  His touchdown celebrations are less and less frequent these days as is the likelihood he’ll be wearing one of those yellow jackets for real. 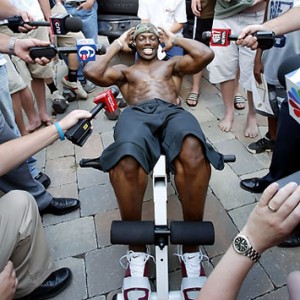 1) TERRELL OWENS – Without question, T.O. gets the nod for being the most self-centered and self-serving athlete in any sport today.  Only Owens could coin and copyright the expression “I love me some me.”  The media circus he himself creates feeds this man’s ego even further.  He is the very essence of narcissism.  In fact, when Narcissus looked into that pool of water, he may very well have seen Owens’ reflection!  T.O. once felt Cowboy quarterback Tony Romo and tight end Jason Witten were conspiring to not throw him the ball.  It reeked of a boy upset his siblings wouldn’t let him play with their toys.  He later backtracked, claiming he never made those comments.  Years ago, he allegedly overdosed on sleeping pills then claimed that never happened either.  Owens has his own publicist.  He holds press conferences shirtless in his front driveway while doing sit-ups.  There’s not a man around that wouldn’t trade their body type for Owens’ but probably not at the expense of being friendless.  Now he’s got his own reality television show.  Like we couldn’t see that one coming.  Unfortunately for him, he’s probably the only one watching.

It is worth noting that, aside from Brett Favre, none of these athletes have won a championship.  In team sports, the rise of the ‘individual’ often comes at the expense of the common goal and to date that has happened in the case of all these players.  Often, they’re simply un-coachable.  While they’re all among the most talented in their respective fields, they may continue to get their face time but one thing they won’t be getting is hardware at the end of the season.

26 thoughts on “The ego-driven athlete: A top five list”