I’m a huge basketball fan.  I think that much has been established.

Despite my unhealthy obsession with the hardwood, I had never before purchased a copy of Slam magazine, a publication dedicated entirely to basketball.  After seeing Michael Jordan on the cover a few weeks ago, I decided to give Slam a whirl.

In their August issue, Slam’s editors offered up their end-all, be-all list of the fifty greatest basketball players of all time.  The NBA did the same thing several years ago in celebration of its 50th anniversary.  As the game has changed dramatically since then, Slam decided to update the list with a flair of their own. 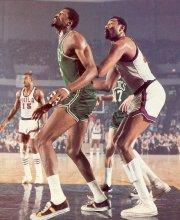 As expected, their compilation is a veritable who’s who of basketball legends: Jordan, Wilt, Russell, Bird, Magic, the Big O, Kareem, the Logo.  Yet the number four player on their all-time list came as a big surprise.  A very big surprise.

After apparently much deliberation and debate, Slam ranked Shaquille O’Neal as the fourth greatest NBA player ever, behind only Michael Jordan, Wilt Chamberlain and Bill Russell, who would likely crack any fan’s top three.  But Shaq fourth?  Really?  Better than Magic Johnson who could play all five positions and revolutionized the way we measure point guards?  Better than Larry Bird who revitalized a Celtics franchise by hitting big shot after big shot when it mattered most?  Better than Oscar Robertson who made the triple-double look routine?  Better than Kareem Abdul-Jabbar, the league’s leading all-time scorer?  Shaquille’s impact on the game is undeniable but the fourth best player of all time he is not.

I have a lot of sports junkie friends with whom I toss around ideas before putting them on the website.  I’d like to think they’re relatively well-versed in all things round ball, some of them much more so than me.  They’re my collective sounding board.  As soon as the Slam issue came out, I asked the lot of them to name their top five basketball players of all time in no particular order.  Not a single one of them mentioned Shaq.

With all due respect to the Diesel, he’s a beast.  Behind Wilt, he’s likely the most dominant big man to ever play the game.  About to enter his 18th season in the league, Shaq is the active career leader in scoring, fifth all-time behind Jabbar, Malone, Jordan and Wilt.  3,800 points behind Chamberlain, at his scoring current pace, Shaq would have to play another three seasons to pass him.  Shaq is also the current active leader in rebounds, ranking 15th all time.  Wilt’s rebounding record of 23,924 is in no danger of being broken as Shaq has just over half that amount (12,566).  Shaq’s never been known as a great rebounder, they just fall his way because of his sheer size.  Buck Williams and Walt Bellamy have more career rebounds.  Lastly, the Diesel is 7th on the all-time blocks list, 1200 behind the all-time leader, Hakeem Olajuwon.  Aside from titles and MVP awards, these are the statistics by which all great centers are measured. 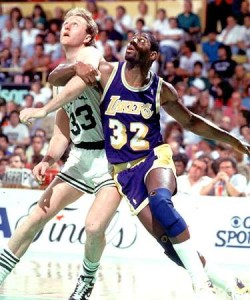 In actuality, Shaq might not even be the fourth best CENTER to play the game, never mind the fourth best player.  Wilt, Russell and Kareem were dominant.  Shaq’s lone MVP pales in comparison to Kareem’s six, Russell’s five and Wilt’s four.  For the record, Bird and Magic have three each.  Last time I checked, Hakeem Olajuwon bested a young Shaquille head-to-head in the 1994-95 Finals.  And if you want to label Tim Duncan a center, Timmy has just as many titles and one more MVP award.

By no means am I hating on Shaquille O’Neal.  He’s been great for the game.  He’s got charisma, style, an unlimited supply of nicknames and very possibly the best sense of humor in sports.  He owns four championship rings and, in his waning years, will give a title run a few more tries with his new wing man, LeBron James.  But his game is still flawed in many respects.  Let us not forget he’s a career 58% free throw shooter.  And he’s likely never hit a jump shot from outside seventeen feet.

Shaq was a force.  Still is.  Cleveland will be a tough out with him in the paint, but they were a tough out anyway.  Shaq’s career is beyond admirable.  Top ten?  Probably.  But even HE wouldn’t say he’s the fourth greatest player of all time.  Given another title or two with LeBron, we can revisit Shaquille’s legacy which he continues to write.  But even with two more titles, it’s unlikely he’ll go down as the fourth greatest player ever on anyone’s list other than Slam’s.

I’ve included their list below for you to review, discuss and debate.  You’re bound to find other questionable names and rankings.  Karl Malone at only 18?  David Robinson as high as 25?  Underneath, I’ve listed two other groups of names: 1) players that were on the NBA’s 50 greatest that didn’t make Slam’s poll and 2) other players that arguably could have been included.

Coming up with such a list is a tremendous endeavor.  I commend Slam for their efforts.  But to have an editorial consensus that Shaquille O’Neal ranks fourth all-time means that, if they averaged out these rankings, someone must have voted him higher than that!  And that is simply inconceivable.

** Players not on the list: Dwyane Wade,  Dirk Nowitzki (the only MVP winner to not make the list), Bernard King, Dan Issel, Alex English, Reggie Miller

49 thoughts on “Debating Shaquille O’Neal’s place in NBA history: How Slam got it wrong”