For decades, athletes from Walt Frazier and Joe Namath to Derek Jeter and Dwyane Wade have graced us with a sense of style and pizzazz off the field.  Due to uniform restrictions in most professional sports, it is much more difficult for athletes to fashionably express their individuality on the field.  Some athletes, however, still manage to find a style uniquely their own, simply by using their heads.  From hats to facemasks, eye black to visors, these twelve have established their own personal trademarks by sporting some type of headgear that makes them utterly recognizable.  Where do they rank on your list? 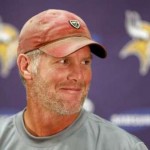 12 ) Brett Favre’s Stained Baseball Cap – Nothing screams John Deere quite like a Brett Favre press conference.  The on again, off again, gun-slinging, formerly retired quarterback of the Green Bay Packers…. I mean New York Jets…. wait, no, the Minnesota Vikings made a lot of press lately with his most recent return to the NFL.  When Minnesota officially announced his latest comeback, Favre looked like he had just gotten off his riding lawnmower.  A slave to fashion he’s never been but don’t tell that to the marketing brass at Wrangler jeans.  Favre has a style all his own, no matter how tired we all are of seeing it.  What other Hall of Fame athlete could get away with wearing a torn, oil-slicked baseball cap while announcing he was about to earn $12 million at the age of 40?

11) LeBron James’s Headband – LeBron James has made the sweatband for your head fashionable again in the NBA.  Never before has a man wearing a headband been so intimidating.  Only King James could rock the headband and make it look cool.  Well, he and John McEnroe back in the day but LBJ has considerably less hair.  You go ahead and tell the league’s brightest talent that headbands are lame.  Just be careful he’s not dunking over you in the meantime.

10) Nick Saban’s Straw Fedora – Cross Bear Bryant with Indiana Jones.  Mix in a little Tuscaloosa sunshine and what do you get?  The Nicktator.  Alabama head football coach Nick Saban may have traded Miami teal for Crimson Tide but in both locations, he sported a straw hat to keep him cool and looking cooler.  He may not have the flair, or the legacy, of ‘Bama’s founding father, nor will he be welcomed back in Miami or Baton Rouge any time soon, but as long as Saban continues to amass victories at Alabama, one of the best coaches in college football will be able to wear whatever he likes.

9) Manny Ramirez’ Pine Tar Soaked Batting Helmet – The Boston Red Sox hadn’t won a World Series in nearly ninety years.  Then Manny Ramirez came to town.  The only problem was you could never see the ‘B’ on his batting helmet.  If Manny didn’t have Boston written across the front of his uniform, you might not know what team he played for.  While warming up in the on deck circle, Ramirez would routinely coat his helmet with pine tar to get a better grip on his bat. It must have worked because he was a force at the plate for Boston, winning the 2004 World Series MVP.  Long before he signed with the Dodgers, his sullied, brownish-blue helmet was his trademark, along with his 500+ career home runs and .314 career batting average.  That’s just Manny being Manny. 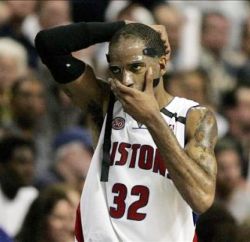 8)  Richard Hamilton’s Face Guard – Rip Hamilton once fractured his nose three times in the same season.  Since he has no cartilage left in his nose, team physicians recommended he not play basketball without wearing a protective, Phantom of the Opera-like facemask.  He has become so accustomed to playing with it that he now calls it his ‘cape.’  After the successive injuries, Hamilton had to have nasal reconstructive surgery.  Not since Jennifer Grey has a nose job looked this good.  Hamilton was not the first basketball player to don a protective facemask on the court but he may be the first to make it look fashionable.  Hamilton covers the Velcro straps of his mask with a headband that matches his uniform.  The Phantom of the Opera is cool but he never averaged 19 points per game in the Association like Rip.  Nor does he own a college and NBA Championship ring. 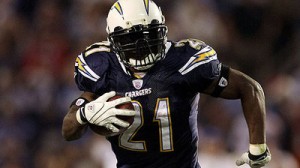 7) LaDanian Tomlinson’s Tinted Helmet Visor – Arguably the best running back of his generation, at thirty years of age, LT still has it going on.  He’s already 14th on the NFL all-time rushing yards list.  A respectable ground game in 2009, can propel him into the top five.  The only problem for defenders trying to bring him down is that they can’t see the whites of his eyes as he passes them by.  LT was definitely not the first to try out the tinted visor on his helmet but he may very well be the coolest.  ESPN even parodied his helmet in a commercial where he works in the company mail room, but struggles to see anything through his visor and ends up putting mail in all the wrong slots. 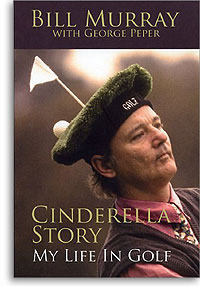 6) Bill Murray’s Golf Hats – Call it goofy chic but no one can consistently turn silly into stylish like Bill Murray.  He’s been doing it for years while simultaneously keeping us in stitches.  The Cinderella story who gave us Carl Spackler in Caddyshack is a regular at celebrity, pro-am tournaments and is usually the center of attention from tee to green.  Any one of us would be laughed off the links wearing hats like his, but not Bill.  Murray provides us with a constant reminder not to take life too seriously and that more than anything, sport is to be enjoyed. 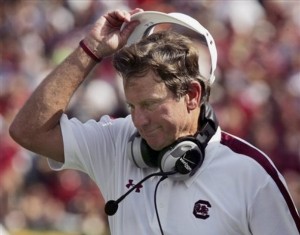 5) Steve Spurrier’s Visor  – Temper, temper.  You’d think one national championship, six conference titles and a decade of dominance would be enough to ease one’s frustration.  Not so with the Ol’ Ball Coach who is infamous for his proclivity to slam his visor to the turf when his old Florida Gator team would miscue.  Spurrier now sports his visor while patrolling the sidelines in Columbia, South Carolina.  Despite not winning as often as he did in Gainesville, Spurrier has eased up on the visor-throw a bit after recognizing that many thought it was in poor taste. 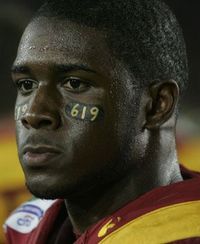 4) Reggie Bush’s Eye Black – At USC, Reggie Bush was unstoppable.  In only three years at school, he ranks tenth all-time in NCAA all-purpose yardage.  Every game, Reggie Bush routinely gave a shout out to his proud hometown of Spring Valley, California in his own, personalized way.  On his face.  The college phenomenon and Heisman Trophy winner was one of the first to regularly scribble his home town area code of 619 on his eye black to recognize his friends and family.  Then he ran roughshod over the competition. 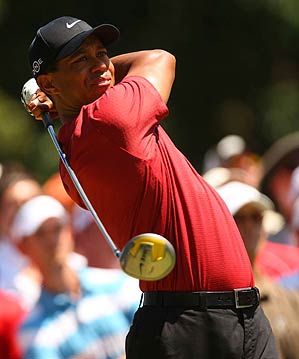 3) Tiger Woods’ Black Hat – Remember in Pulp Fiction, when Samuel L Jackson would recite a bible verse just before executing someone?  “The path of the righteous man is beset on all sides by the inequities of the selfish and the tyranny of evil men.”  That was just one of his many, memorable catch phrases of the film.  As he explained, if you heard those words “it meant your ass.”  Well that’s what other professional golfers must think when they see Tiger’s black hat on a Sunday.  I’m surprised his cap doesn’t have Ezekial 25:17 written somewhere on the side of it.  Tiger’s black hat and red shirt have become his final round trademark.  While Tiger puts up birdie after birdie, other golfers crumble like a single guy nervously approaching a pretty girl at a bar.  Tiger has proved himself human of late, not winning a major in 2009, but he’s still far and away the best golfer on the planet.  No golfer wants near him when he’s making a Sunday charge. 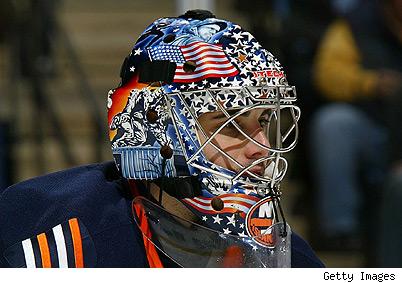 2) Rick DiPietro’s Stars and Stripes Goalie Mask – Most decorated NHL goalie masks are cool but New York Islander goalie makes a statement with his.  His helmet alone is worth the price of admission.  Rick DiPietro, whose father is a Vietman veteran, honors the armed forces with his headgear every time he takes to the ice.  DiPietro, the New York Islanders number one draft pick in 2000, boasts stars and stripes and the POW emblem on his goalie mask.  All athletes should be this classy. 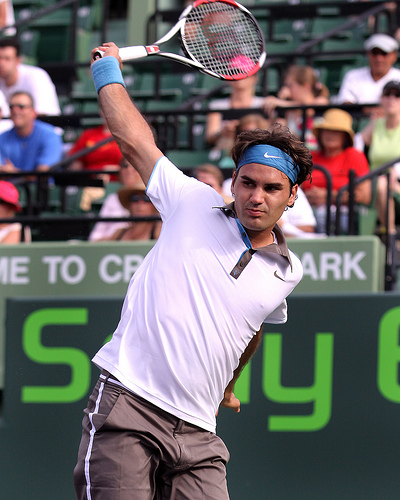 1) Roger Federer’s Bandana – Have you ever been out in public and seen a guy walking around with a sash on his head?  Unless you’re in the Village, you probably thought to yourself “What in the world was that guy thinking before he left the house?”  Well, when you have 15 career grand slam victories, the most in tennis history, you can pretty much wear whatever you want.  Roger wears the bandana and wears it well. Women want him, men want to be him.  Let me get this straight.  The guy’s a model AND the best tennis player in history?  My tennis game is a model of how not to be played.  How is this fair?  Federer could probably make an eye patch look fashionable if he tried.

43 thoughts on “The coolest headgear in sports: A top twelve list”