Thanksgiving is a special time of year.  It’s a holiday when family and friends gather round the dinner table and give thanks for everything they have.  Back in the day, I used to dread that time of year for it meant the annual meeting between Florida and Florida State. 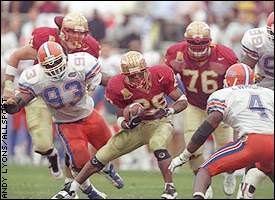 Now all is good. Florida has beaten Florida State soundly the last five times they’ve played by a combined score of 165-61.  But back in the 1990s when the Gators were trying to solidify themselves as a national power, they would be brought back down to earth with a swift, tomahawk chop.  Warrick Dunn, Charlie Ward, Derrick Brooks, Deion Sanders, Tamarack Vanover wore the garnet and gold with pride.  They were bad ass.

In 1994, perhaps the most painful Gator ‘loss’ of them all, Florida State came back from a four touchdown deficit IN THE FOURTH QUARTER to tie the game 31-31.  We watched that game in disbelief, knowing all along the outcome was inevitable.  After the game, Bowden was asked why he didn’t go for the two-point conversion and the win.  Bowden smirked at the reporter and responded confidently in his southern drawl that his boys had played too hard to risk losing the game.  Everybody knew the Seminoles had won that day despite what the scoreboard said.

Sure, Florida got its occasional victory, including the biggest game played between the two, the 1997 Sugar Bowl, but wins were few and far between.

Simply put, Florida State owned Florida.  Not so much anymore.

Which brings us to present-day Bobby Bowden. 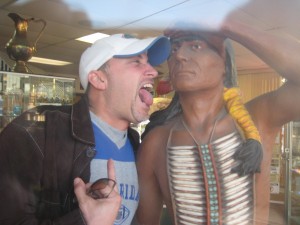 Hey, I’m no Seminole.  In fact, I’m the anti-Seminole.  But it’s clear to see the football program is a shell of its former self.  Florida State no longer strikes fear into its opponents as it once did.  No disrespect to South Florida who totally outplayed Florida State on Saturday, but they were 14 point underdogs.  There is NO reason Florida State should lose that game in the manner they did.  Florida State was out-hustled, out-played, out-smarted and out-desired.  The gathering of green-shirted, Bulls fans reduced the tomahawk chop to a dull murmur.  Who would have thought?

Bobby Bowden has forgotten more about football than I will ever know.  But Florida State hasn’t won a meaningful bowl game since Michael Vick was still in college.  If it’s true, as many people speculate, that Bobby Bowden is still coaching to try to compile more career wins than Joe Paterno, which I personally don’t believe to be true, then that is not reason to just hang around.  The program is suffering.

Why didn’t Florida State pursue Daniels, who probably would have signed as soon as Coach Bowden walked into his living room?  Only Florida State knows for sure.  But watching him Saturday, Daniels looked exactly like the kind of kid Florida State used to make famous.  The crafty kid who could dismantle an opponent not only with his arm and his legs, but with his mind and his will.  Now Daniels wears USF green and there wasn’t a Seminole in the stands who wouldn’t have preferred him in garnet.  Heck, half of them probably would trade Bowden for Jim Leavitt at this point. 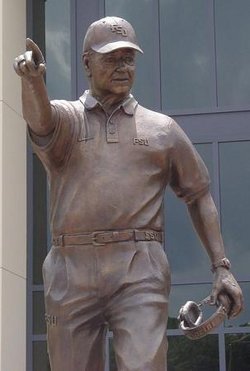 Who’s to say what will become of BJ Daniels or the Florida State program?  Daniels might turn out to be a bust.  Bowden might turn things around.  But it sure didn’t look that way on Saturday.  The USF team that faced the Seminoles in Doak Campbell Stadium dominated the line of scrimmage from start to finish.  They were simply the better team.  That’s coaching, talent and desire, three things the Seminoles apparently don’t have anymore.

Bowden patrolling the sidelines is good for Gator fans.  I haven’t worried about that game in years.  Thanksgiving is enjoyable again.

Coach Bowden has put countless college football players into the NFL.  He’s won two national championships.  He built the program.  He’s the very reason the team is held to such a high standard.  He’s earned the right to leave when he wants.  Or has he?  No one man is bigger than the program, even if the stadium he coaches in bears his name.  He made the program what it is today, but it also made the program what it is today… an average team at best.  These are not the Seminoles of old.  The talent isn’t there and someone has to be held accountable.  Bowden will go down as one of the greatest coaches of all time but remaining on the sidelines as nothing more than a figurehead might just be doing the school more harm than good.

45 thoughts on “Bobby Bowden, the Florida State Seminoles and the end of an era”