-Kool and the Gang

Congratulations!  You just received that promotion you’ve been anticipating.  You closed a huge sale, finished that lingering household project or lost the weight you’ve been trying for months to lose.  It’s time to celebrate.  After all, who could hold back emotion after such an accomplishment?  Wouldn’t you immediately pat yourself on the back, phone a friend or rejoice with your family?  After all, you deserve it.

Well, be thankful you don’t play college football, for in that venue, showing any sort of emotion is a violation of the rules.  Such an outburst costs you fifteen yards of field position and possibly a shot at a national title.  It might even grant your opponent a chance they otherwise would not have earned.

Such was the case this Saturday.

In the final ninety-nine seconds of the Georgia-LSU game, a day-long defensive struggle quickly turned into a score-fest.  Those last fourteen points changed the game and the national football landscape.  So did one man’s judgment of another man’s joy. 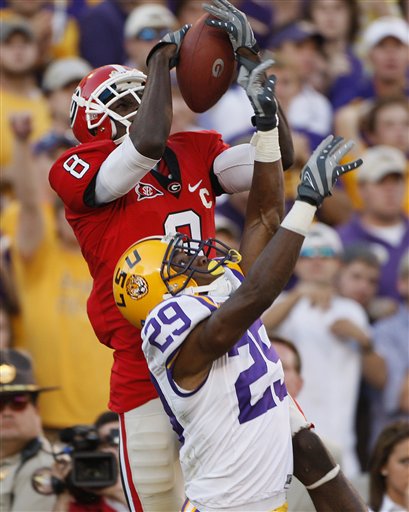 With minutes to spare, down 12-7, quarterback Joe Cox led Georgia to an apparent victory when he fired a pass that AJ Green miraculously grabbed in mid-air over his defender.  The reception sent a stadium full of Bulldogs into a frenzy.  On the ensuing possession with seconds to spare, LSU’s Charles Scott ran 33 yards, giving LSU the victory and silencing that rabid crowd.  The only problem?  Scott’s game-winning touchdown might not have occurred if not for a little yellow flag.

Shortly after scoring their respective touchdowns, both Green and Scott were penalized fifteen yards for excessive celebration.  The Scott penalty was more blatant, but less costly as too much time had expired.  The Green penalty, however, occurring seconds beforehand, meant LSU was a Trindon Holliday runback away from field goal range… and the victory.  There wasn’t a fan between the hedges who couldn’t see that coming.

In recent years, college football officials have been cracking down on any form of emotion whatsoever.  In the Georgia-LSU game, the penalties may have affected the outcome.  This is no excuse.  Coaches and players know the rule, which is in place to teach kids discipline, sportsmanship and honor… I think.

I still can’t help but wonder what’s so wrong with showing emotion or expressing individuality on the field.  You’ve practiced your whole life for these moments.  You’re performing in front of thousands of screaming fans.  You’ve given your team the lead and your adrenaline is pumping.  You’re not supposed to celebrate?  It’s the exclamation point at the end of a perfect sentence.

NCAA Football Rule 9-2, Article 1(a)(1)(d) prohibits “Any delayed, excessive, prolonged or choreographed act by which a player (or players) attempts to focus attention upon himself (or themselves).”  The rule allows for too much referee interpretation.  We’ve seen players gather together and chest bump after a big play but who’s to decide what is acceptable and what warrants a penalty?

Look, I used to coach.  I preached the importance of sportsmanship.  Win or lose, my kids would shake hands with the opponent and congratulate them on a game well-played.  That’s what sports is all about.  If a kid didn’t celebrate after hitting the winning basket, I’d assume something was wrong with him. 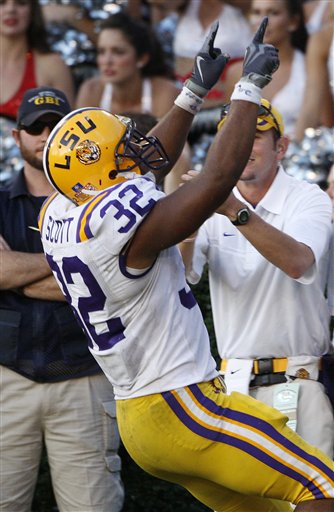 Celebration occurs in every other organized sport, so why not college football?  When a baseball player hits a walk-off home run, the entire dugout awaits his return to home plate.  After a last second three-pointer, NBA players rush the floor.  In the NFL, end zone dances have been made famous by many.  When a tennis player hits a baseline winner at a crucial moment, there’s elation.  When Tiger nails a birdie from twenty feet out, he pumps his fists.  Even in other college sports, players are allowed to celebrate a job well done but not in college football.  The muzzle has been tightly clamped.

A football player has been conditioned all week to smash his opponent in the mouth.  Asking him to suddenly squelch his emotions after scoring is akin to bringing home a Vietnam veteran, taking a weapon out of his hands and demanding he fit back into civil society.

If I wanted dull, I’d read Russian literature or watch Jerry Sloan’s Hall of Fame induction speech.  This is college football.  I oppose taunting an opponent but the line between celebration and unsportsmanlike conduct is not as fine as the NCAA would have us believe.  What’s to say officials are not as caught up in the moment as the other 100,000 people in the building?

We are human beings, creatures of emotion.  It’s what differentiates us from other animals on this planet.  We celebrate and we mourn.  We live, we laugh, we love.  We are a nation of Kirks, not Spocks.  Penalizing the college athlete for expressing emotion is not only unnecessary, it’s detrimental.

LSU may have won Saturday’s game regardless but their victory was facilitated by the Green penalty which was questionable at best.  Picture if you will, LSU advancing to the national championship game.  Would they have done so with a mid-season loss in Athens, a loss that might have occurred had one man not been penalized for drawing too much attention to himself in the heat of the moment?

In the end, it’s not about national championships.  It’s about allowing people to express themselves within the context of the game.  The time has come to modify the rule or at least its interpretation.  Penalize players for taunting but let them celebrate.  Everyone else in the stadium is.