I don’t know Charlie Weis. I’ve never met the guy and likely never will. All I know of Coach Weis is what I’ve seen on television or heard in interviews, but he seems like a nice enough guy.

I’ve never had any allegiance to either him or Notre Dame, the school that just fired him. In fact, aside from Jerome Bettis running roughshod over the Gators in the 1992 Sugar Bowl, and my buddy Rocket Dan finding their mascot, the “Fightin’ Irish,” wholly offensive, I’ve been relatively apathetic towards Notre Dame over the years. 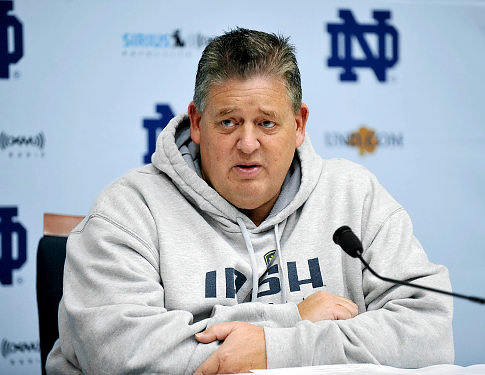 On Monday, the Weis era officially came to a close in South Bend. Notre Dame’s four-game losing streak to end the season capped off a disappointing year, and tenure, for Coach Weis. Entering this season, his team had lofty expectations, yet with each loss, his job security came further into question.

During that losing streak, I didn’t hear a single analyst project that Weis’ job was secure. Turns out they were right. Yet in the relentless pursuit to be the first to report the Weis firing, journalists may have ended up breaking the man as well as the story.

With each loss, Weis looked more and more dejected. After Saturday’s heartbreaking loss to Stanford, Weis called off his post-game press conference, likely because he didn’t feel like answering any more speculative questions about his future. Or maybe he already knew his fate.

By comparison, Tim Tebow’s career at Florida over that same period could not have been more opposite. Despite the contrast, the two men have quite a bit in common. Five years ago, their futures were as bright as can be. Weis had just inked a multi-year, multi-million dollar deal with his alma mater. Tim Tebow was eying the school of his dreams. Both men are among the most recognizable faces in college football. Tebow plays for a coach who has Notre Dame roots and whose name is routinely mentioned as a potential successor to Weis. And Tebow and Weis both have championship rings, Tebow with Florida and Weis with the Giants and Patriots. Yet while Weis failed to meet Notre Dame’s aspirations, Tebow superseded expectations tenfold. 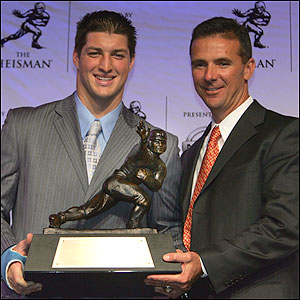 Since taking over at Florida, Urban Meyer and Tim Tebow have dominated college football. They’ve won two national championships and are two victories away from a third. Tebow already has one Heisman trophy and is in the running for his second. His legacy is nearly unparalleled. In contrast to Weis who the masses have reviled, no one ever has a single bad thing to say about Tebow. In fact, the only knock on Tebow is that he might NOT be the greatest college football player ever. The Tebow years will go down as Florida’s finest hour; the Weis years at Notre Dame will be largely remembered as a failure. Therein lay the chilling contrast.

Now Weis is gone and Notre Dame’s search for a new head coach begins. Football’s coaching elite will be mentioned as possible successors. But in all honesty, who would want that job? Although the school boasts one of the most decorated programs in college football, you’d have to be an egomaniac and/or glutton for punishment to even interview for that position. The coach of the Dallas Cowboys and the manager of the New York Yankees aren’t scrutinized this much. Former Notre Dame coaches Bob Davie and Ty Willingham were fired after .583 winning percentages but neither coach had a significant bowl victory. Knute Rockne, Ara Parseghian and Lou Holtz left big shoes to fill. Then again, so did Steve Spurrier and Meyer filled those quite nicely.

Regardless of who they name as their next head coach, Notre Dame will always get every school’s best shot every time out. They are the team everyone wants to beat, a college football measuring stick. When UConn beat Notre Dame two weeks ago, head coach Randy Edsall called it the biggest win in the history of their program. Notre Dame was 6-4 at the time.

I can’t say I necessarily feel sorry for a guy who’s about to receive an $18 million severance check, but if I did have to feel sorry for someone in college football, it might just be Charlie Weis. Over the past month, he’s looked like a beaten man. What many fail to realize is that Notre Dame’s last four gut-wrenching losses were by a combined 17 points, two of them coming to ranked teams. But losses are losses. College football is not horseshoes. 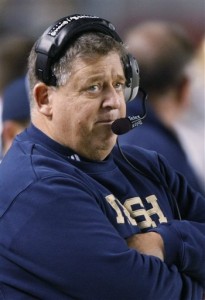 Either way, a well-needed vacation for Coach Weis is in order. Although disappointed with the way things ended up at his alma mater, he’ll still be laughing all the way to the bank. He might even be a little relieved. Meanwhile, 1000 miles away, the man who shunned Notre Dame to coach at Florida will lead his team to a potential third national championship. Tim Tebow will man his front line.

Tebow’s time in Gainesville has been nothing short of storybook, his only regret so far is being unable to convert a 4th-and-1 against Ole Miss. I wonder whether Coach Weis regrets any of his five-year stint in South Bend. Five years ago, he looked like a perfect fit for the program. After going 35-27, that turned out not to be the case.

I don’t know whether Tebow will win another Heisman or national championship. Nor do I know where Weis will end up next or if he’ll even coach again, but I imagine he’ll be a lot richer for the experience. And not just because of that eighteen million dollars.

35 thoughts on “Charlie Weis and Tim Tebow: A contrast in circumstance”