We once again find ourselves smack dab in the middle of Christmas season, yet some of us have been short on the holiday spirit lately, and not just because we’ve heard White Christmas for the umpteenth time. 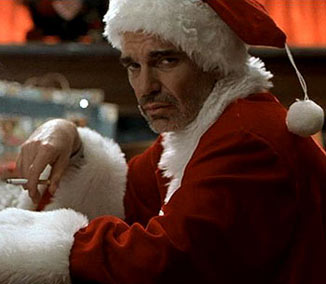 I know we’re all broke, but isn’t this the time of year when we’re supposed to spread good will towards our fellow man? Well, the following sports personalities didn’t get that memo.

Over the past few weeks, we have seen a whole lot of coal dumped into other people’s stockings. So, in honor of my favorite holiday movie, Bad Santa, here’s a top five list of those who could use a good dose of holiday cheer.

If anyone were in the Christmas spirit this season, you think it would be the folks at Touchdown Jesus. Although their bootstraps might be a little tight with that $18 million check they just cut Charlie Weis, at least they’re about to embark on the Brian Kelly era. 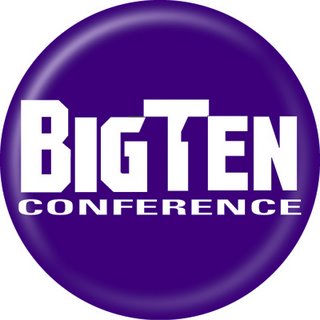 This off-season the Big Ten is once again toying with the idea of adding a twelfth team (Yes, there are eleven teams in the Big Ten. Go figure!). In 1999, the Big Ten invited Notre Dame to join their conference yet Irish brass turned them down, opting to remain independent.

The Big Ten is now reportedly looking at Pitt, West Virginia, Syracuse, Iowa State, Rutgers and Missouri, but probably not Notre Dame. When the Domers became aware that the Big Ten would not actively seek them out as a twelfth member this time around, Notre Dame went all nanny-nanny boo-boo on them and said they wouldn’t be interested in joining the conference anyway. Notre Dame might want to soon replace their “Play Like a Champion” mantra to Groucho Marx’s “I would never belong to any club that would have me as a member.”

In the past, the SEC, Big 12 and ACC have all expanded, as well as added a conference championship game. The Big Ten has yet to do so, traditionally finishing its conference schedule by Thanksgiving weekend; the grand spectacle between Ohio State and Michigan completed before turkeys are even basted. When bowl-worthy, these teams might wait up to six weeks before taking the field again.

Adding another major program and championship game is likely years away but the move would add some credibility to a conference that has taken some hits lately for its overall competitiveness. It would also bring the Big Ten millions in revenue just in time for Christmas. 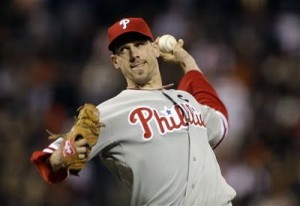 The Phillies just pulled off a blockbuster, three-team trade with the Seattle Mariners and Toronto Blue Jays. In an effort to bolster their starting rotation, Philadelphia landed Roy Halladay, who many consider the best pitcher in the game. In doing so, they parted with Cliff Lee, who they acquired late last season as part of their World Series run. Both Lee and Halladay are former AL Cy Young Award Winners, Halladay in 2003 and Lee in 2008, but Philadelphia obviously felt Halladay was the more sound investment.

It was widely reported that the Phillies didn’t make an effort to re-sign Lee because he wouldn’t agree to a long term deal, however in a recent ESPN interview, a surprised Lee said nothing could be further from the truth. He would have gladly signed a long-term deal to stay in Philadelphia and retire a Phillie.

Chalk it up to miscommunication. Either way, Lee now finds himself in Seattle, a three thousand mile sleigh ride away from Philly. At least in Seattle, they don’t boo Santa Claus.

Three) Clinched Hens: The Indianapolis Colts versus The Loss Column

The Colts have been very unfair to the loss column this football season. In fact, they’ve been downright Scrooge-like. Fifteen weeks into the season, the Colts have yet to lose, jingling all the way to home field advantage throughout the playoffs. 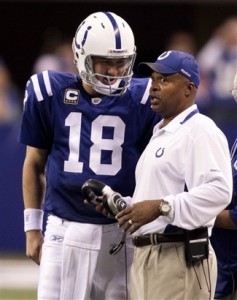 With their latest victory, the Colts have actually extended their winning streak to 23 regular season games, an NFL record. They have a rookie head coach who has yet to lose a game in the league and perhaps the greatest quarterback to ever play the game. They’re doing their best to remain humble as they try for an undefeated season. But we’re getting way ahead of ourselves. They still have the Jets and Bills to play. Two more wins ‘til perfection means we’ve already had our first Mercury Morris sighting.

Debate rages on over whether the Colts should rest their starters or strive for an undefeated regular season. In the words of the Houston Astrodome fans in Bad News Bears In Breaking Training, I say “Let them play!”

There’s plenty of season left to unwrap but watching the 18-0 Colts strive for perfection in the Super Bowl would be one belated Christmas present we all could enjoy. 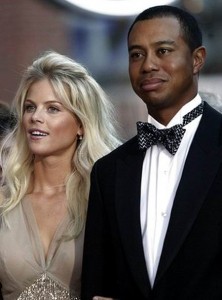 What more can be said about the year’s most famous breakup? You’ve seen the collection of spoof videos. You’ve seen the never-ending parade of mistresses. The only thing we haven’t seen is Tiger himself.

After his various indiscretions came to light over the past few weeks, Tiger has apologized for his rampant infidelity but even shopping at Jared’s won’t get him out of this jam. Tiger also wrote, on his website, that he will be taking an indefinite leave from golf, meaning the PGA Tour’s television ratings should decline like this year’s holiday spending.

As Tiger’s sponsors continue to pack up, apparently so has his wife. There’s speculation that Elin is leaving Tiger and heading back closer to the North Pole.

When is enough coverage enough? Apparently never. Tiger’s infidelity updates are played more often than Christmas jingles in your local mall. The New York Post has now led its front page with a Tiger Woods headline nineteen straight days, breaking the former record held by its coverage of 9/11. As Jim Rome mentioned on J.R.I.B., so much for priorities.

Perhaps we should keep things in perspective this December and remind ourselves what’s really important.

One) General in a Pear Tree: Bobby Knight versus John Calipari

A mutual respect resides among the sports coaching fraternity. Coaches generally don’t go after one another. They understand the constant pressure and scrutiny their jobs entail. Losing is not an option. If a coach is fired or falls upon tough times, other coaches are quick to have his back. Not so much this Christmas. 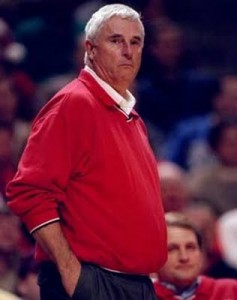 This week, a silver-haired, big-bellied, red-clad gentlemen proved not to be so jolly. No, not Santa Claus. I speak of Bobby Knight.

In a recent speech at the Indiana Basketball Hall of Fame, the winningest coach in men’s college basketball history, said the modern game suffers from a lack of integrity, referring to one coach in particular: Kentucky’s John Calipari.

With regards to Calipari, Knight quipped “We’ve gotten into this situation where integrity is really lacking and that’s why I’m glad I’m not coaching. We’ve got a coach at Kentucky who put two schools on probation and he’s still coaching.”

You’re a mean one, Mr. Grinch.

Knight’s comments might not have been as physically threatening as John Chaney’s when he threatened to kick Calipari’s ass in a post-game press conference some fifteen years ago, but Knight’s words probably carried more weight. This was an all-out Calibody slam by one of the sport’s most legendary coaches. So much for Christmas cheer.

Knight has had his share of anger issues over the years but he never had Final Four banners removed from anywhere he’s ever coached. Calipari has at both UMass and Memphis. Knight was quick to point that out.

Even though Coach Cal’s current program looks poised to make a deep run in March, don’t expect him to send Coach Knight a Christmas card any time soon.

Happy Holidays from everyone here at Sportschump!

38 thoughts on ““Can’t We All Get Along” Christmas Edition: A Top Five list”