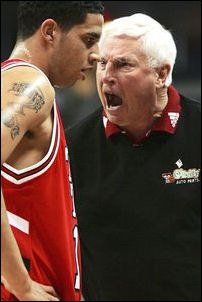 Bobby Knight used to manhandle players. In his days at Indiana University, Knight was known for throwing chairs, roughing up the occasional athlete and melting down at the random post-game press conference. Despite his success, Knight was known as much for his temper tantrums as he was for his titles. When you sent your kid to play for Knight, you knew what you were getting: a strict disciplinarian. In some sick and twisted way, Knight made treating a player in that fashion almost acceptable.

That was until Neil Reed. It was Reed’s allegations that Knight choked him in practice, charges that were later confirmed when a video of the incident was made public, that ultimately led to Knight’s dismissal.

This season, the ‘hands on’ approach to coaching has taken on new meaning. While it might seem unfair to compare Mark Mangino, Mike Leach and Jim Leavitt to Bobby Knight, they all share one thing in common. They were all fired from their respective positions amid allegations that they in one way or another mistreated one of their players.

Mangino’s, Leach’s and Leavitt’s careers are strikingly similar. Even more so now that they have all been terminated. They were all successful college football coaches, the founders of their current (or former) programs. In a conference traditionally dominated by Texas, Oklahoma and Nebraska, both Leach and Mangino made their lesser storied programs competitive on a national level. Leach consistently had Texas Tech in the running for a Big 12 championship. Last year, it was Texas Tech who ruined Texas’ perfect season, knocking them out of the national championship game. Mangino rebuilt the Kansas program, not easy to do at a basketball school. In 2007, he led them to a 12-1 record and an Orange Bowl victory over Virginia Tech. It wasn’t long ago that Jim Leavitt’s USF Bulls were in the running for a Big East, and potential national, championship. They were ranked as high as #2 in the polls, something unheard of for any school in the sunshine state not named Florida, Florida State or Miami. 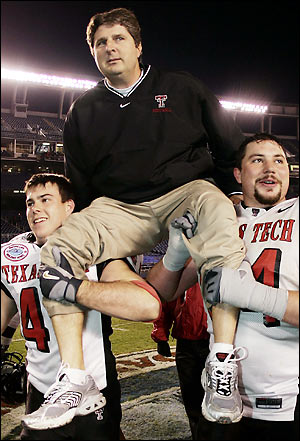 The tenure of all three came to a disheartening end in the past thirty days. Mangino allegedly shouted racially insensitive comments towards one of his players. Leach allegedly instructed a trainer to lock a concussed player in an equipment shed. While the details of the Leavitt case are still unclear, the results aren’t. Leavitt is gone and so is his staff. Boxes packed, offices cleared out. USF now begins the search for only the second coach in its young history.

In this day and age of relentless media scrutiny, no program wants to associate itself with any sort of wrongdoing, especially if it involves the mental or physical abuse of one of its student athletes. With so much emphasis on winning, sometimes we forget that these 6’5”, 300 pound men are still only nineteen years old. It appears some coaches have as well.

The job of a coach, particularly in the college ranks, is first and foremost to mold boys into men. That’s not to say that Knight, Leach, Mangino and Leavitt didn’t do that. Their achievements on a personal level with the countless players they’ve mentored far outweigh the negativity of one particular incident. Unfortunately for them, however, it is those incidents, the Neil Reeds, the Raymond Browns, the Adam James and the Joel Millers for which they’ll ultimately be remembered.

There are no winners here. The kids don’t win. They’re labeled as soft or prima donnas. The programs don’t win. They’re tarnished with the image of being unable to police themselves. And the coaches don’t win. Leach, Mangino and Leavitt will all have trouble finding high-profile jobs, the incidents a dark spot on their respective resumes.

Despite the constant criticism of his coaching techniques, anyone who ever played for coach Knight immediately came to his defense. His graduation rates were second to none, his legacy unquestioned. After all, he is the winningest coach in men’s college basketball history. Similarly, Mangino, Leach and Leavitt rank among the most successful coaches of their respective schools. Leavitt was the only coach USF had ever known. But certain allegations are too damning to recover from. 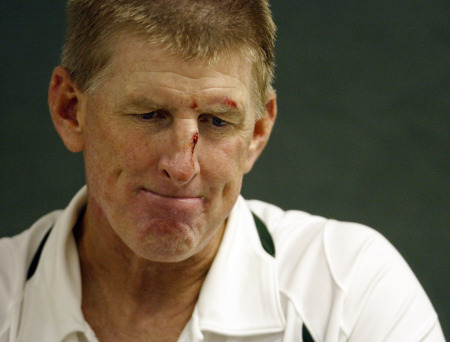 Leavitt coached fourteen years at South Florida. He put the program on the map. Yet the mood was far from celebratory at Friday’s press conference when university president Judy Genshaft and Athletic Director Doug Woolard announced they were moving on. These are not the kind of press conferences schools like to give.

More details will eventually emerge from the Leavitt case, but we may never know the full truth. Leavitt has denied any inappropriate behavior. So have Mangino and Leach. In cases this severe, a coach is guilty until proven innocent. Football is a contact sport. How fine is the line between coaching and coddling, between tutoring and torment?

Now these schools must all start anew. They’re programs will suffer in the meantime. Nick Sabans and Urban Meyers don’t grow on trees. Kansas, Texas Tech and USF already have two strikes against them having to compete for recruits in areas where larger programs already have a leg up. The recent dismissal of their football figureheads won’t help them in that cause.

57 thoughts on “The new ‘hands-on’ approach to coaching: The unfortunate cases of Mark Mangino, Mike Leach and Jim Leavitt”