This week’s caption contest celebrates one of the most recognizable sports photos ever taken: Wilt “The Stilt” Chamberlain holding up a piece of paper with “100” written on it after just torching the Knicks for 100 points. Wilt took 63 shots that night, making 36 of them. He also went 28-32 from the free throw line. And we thought Allen Iverson shot a lot.

This week marked the 48th anniversary of that fateful evening that I’m sure those covering Wilt would love to forget. Allegedly only around 4,000 fans were in Hershey, Pennsylvania to see Wilt’s performance which remains a league record to this day. That particular game was not televised.

To ease all of you into this caption contest, Wilt probably has several other, off-the-court records that remain untouched to this day.

So, sportschump readers, have at it. And please remember to keep it tasteful as my mom is reading. 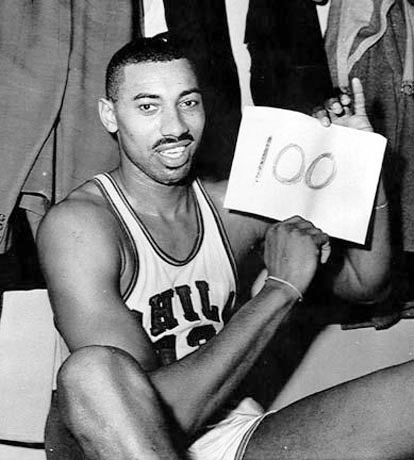