When Creative Loafing asked me to pay the Tampa Bay Derby Darlins a visit for their season opener, I wasn’t quite sure what to expect.  It had been years since I had seen roller derby firsthand.  What I remembered from my childhood was scantily clad women on roller skates, some foxy, some bruisers, speeding around an oval track and beating the snot out of each other at high speeds.

It was refreshing to see that, over the years, not much has changed.

Mohawks, mesh, face paint, tattoos and spandex decorated the Skateplex last Saturday night as hundreds gathered to see the Cigar City Mafia square off against the Black Widows.  Those in attendance did not leave disappointed.

Before the bout, fans flocked outside the rink, waiting for the doors to open.  Girls from both teams mingled with the crowd, talking with friends and promoting their cause.

Once inside, I moved around the rink, trying to position myself as close to the action as possible.  Caution tape lined the track’s perimeter, reminding those in the front row they were in “Suicide Seating.”  It was kind of like the Splash Zone at Sea World, except Shamu would never crash into you wearing roller skates in excess of 30 mph.  I made the mistake of planting myself on a wooden bench against the back wall until a girl shouted “Don’t get too comfortable.  You’re in the penalty box.”

Tampa Bay Derby Darlins is the brainchild of Angela Kroslak, better known as Dee Bauchery to her fans.  After months of recruiting skaters and finding a local rink to host her dream, the league came to fruition in 2005.  The Darlins are comprised of three teams: Black Widows, Cigar City Mafia and the Switchblade Sisters.  They also have a farm team for upcoming players or skaters rehabbing from injury and a Quad Killer program which trains girls interested in joining the league.  The best twenty skaters in the league are selected to the all-star travel team called the Tampa Tantrums. 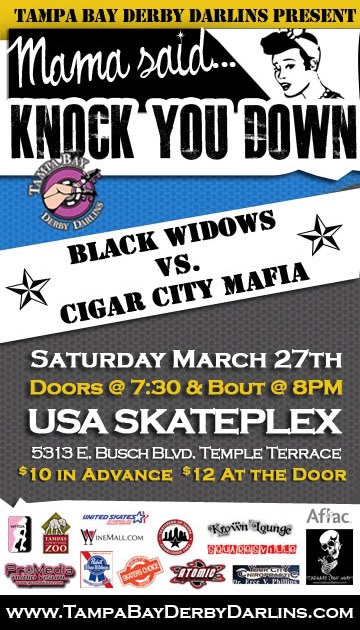 “We are totally a do-it-yourself, grass roots effort,” said Kimberly, aka Flirtin’ W Disaster.  “We’ve got teachers, hairdressers, paramedics, nurses, tattoo artists, girls from all different backgrounds.  Everyone pays for themselves.  The league relies on sponsorships, fundraisers and their own pocketbooks to get by.”  The girls handle all the merchandising, artwork, logistics and even coordinate group babysitting so single mothers can make the bouts.  “We do it for the love of our sport.”

Boyfriends and husbands who are tough enough to stick around help out with refereeing and coaching.  They wear the moniker “Derby Widows” with pride.  “We’ve got beer and girls in short skirts hitting each other.  What more could you ask for? ”

During a bout which consists of two thirty-minute periods, two teams of five skaters each, square off on a flat track.  Each team has a pivot skater up front who sets the pace, three blockers behind them who guard the pack and a jammer who scores the points.

The events are family oriented (they offer a Junior League for girls aged 10-17) yet still cater to adults by selling draft beer out of the back skate closet.  Darlins paraphernalia from t-shirts to bumper stickers was also for sale.  All the proceeds go back into the league.

For the most part, the girls skated with precision that night.  Many hit the ground – heck, that’s what the sport is about – but rarely did you see a skater tumble into the crowd, despite the fact that many spectators probably would have enjoyed the personal contact.  One skater named Little A weaved through the pack amassing point after point as her opponents pounded the side boards, shouting “MA – FI – A!” until the last whistle blew.

Despite the physicality of the sport, I never saw any of the girls intentionally try to injure anyone else.  If there was any jostling, it was rough and competitive yet playful.

Even helmets, wrist guards, mouthpieces and elbow pads aren’t enough to keep away casts and crutches.  A number of girls I spoke with were anxious to get off injured reserve to return to competing.

Flirtin W Disaster was recovering from a fractured fibula.  “Right now, we’ve got a broken clavicle, a broken rib, somebody’s going for knee surgery…. but if you train well, work out, stretch and learn to skate well, you have less of a chance of getting hurt.” 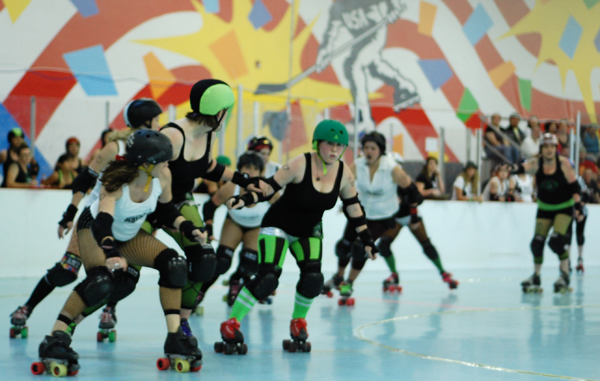 Addy Tude didn’t skate that night due to injury.  She worked the door instead, tallying over 500 fans in attendance.  One can only imagine the atmosphere with twice that many in the building.  Addy feels the league is poised to explode and looks forward to the day they’re looked at “as a sport rather than a novelty item.”

The final score was lopsided (Black Widows won 162-78), but the rink remained packed until the very end.  Afterwards, like softball jocks out after a game, just considerably more sexy, the Darlins flocked to the bowling alley next door for drinks.  Some bowled, some sang karaoke, most were considerably better at roller skating.

A bar that was vacant hours earlier for March Madness was soon overrun with a hundred girls in spandex.  It quickly became the most happening place in town.  Nobody asked whether Kentucky had just lost to West Virginia or whether Butler had just made their first ever Final Four appearance.  They were more concerned with a sport uniquely their own.  The bartender chuckled at me and said “Derby girls, man.”

These women all have the will, energy and desire needed to revive their sport.  There’s no reason to think the league won’t continue to increase in popularity.  “It’s empowering,” said Kimberly  “We’re a bunch of Type-A personalities.  You’re going to have some conflict but at the end of the day, we’re a family and we take care of each other.”