Changing from Green to Red

As if sports fans weren’t already counting down the days until next football season, we were recently treated to news that yet another legendary quarterback was traded within his own division… and this time it’s not Brett Favre. 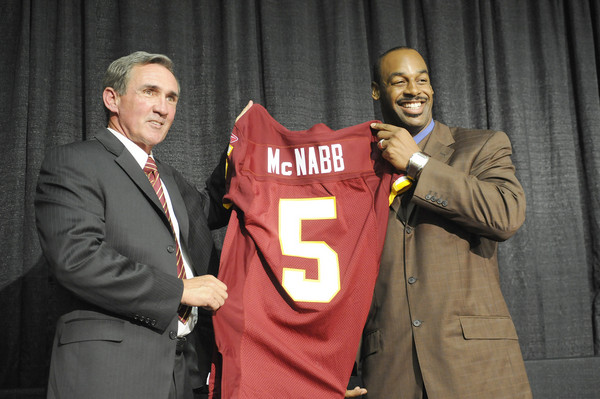 Wake up and smell the cheese steak, Philadelphia, because Donovan McNabb is no longer yours.  The Kevin Kolb era has officially begun.  And much to the dismay of Raider fans who desperately wanted McNabb in Oakland, the JaMarcus Russell era officially continues.

Donovan McNabb, the face of the Eagles franchise for over a decade, was traded this week for a second round pick, plus a conditional pick in 2011.  Philadelphia’s return on its investment doesn’t seem like much considering a) McNabb himself was the second overall pick in 1999 b) he is a six-time pro bowler and c) he’s a sure fire Hall of Famer.

Philly fans have had a love-hate relationship with McNabb since the day he was drafted but as soon as they discovered the deal was consummated, they all must have secretly questioned whether saying goodbye was the right thing to do.  Too late now.

Now comes word that DeSean Jackson, who caught 63 passes from McNabb last year, thinks it’s “a relief” that Donovan is gone.  So much for brotherly love.  We haven’t heard a wide receiver speak so poorly of a guy throwing him the ball since Deonte Thompson said Tim Tebow wasn’t a “real” quarterback.

Philadelphia head coach Andy Reid, who has veto power on all roster moves, endorsed the McNabb trade, calling it the best offer on the table, including deals that were offered for Kolb.

At his first Redskins’ press conference, McNabb, who turns 34 in November, downplayed the importance of playing the Eagles twice next season.  Yeah, and nobody watched Brett Favre’s return to Lambeau field as a Viking either.  An inspired McNabb playing against his former team is a VERY big deal.

Eagles and Packers fans now have something more in common than just their green uniforms.  They both know how it feels to be jilted.  It’s a good thing for Philadelphia that the Phillies will once again contend for a World Series because all signs point to a rebuilding year for the Eagles. 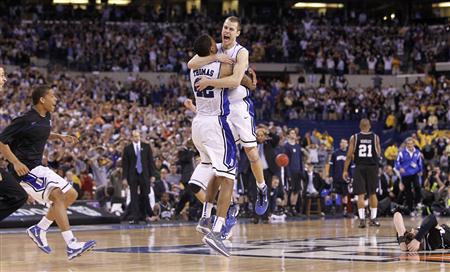 Kyle Singler won this year’s Most Oustanding Player but before you think he’s not worthy of the award, ask yourself who Kent Benson, Art Heyman and Arnie Ferran are.  Like Carmelo Anthony, Magic Johnson, and Patrick Ewing, they are all previous winners of the award.

Despite the inexplicable amount of Duke haters out there, a Blue Devil victory actually spared us the endless and uncreative “The Butler Did It’ headlines that would have littered newspapers nationwide, so for that, we should be thankful.

Monday’s victory gave Mike Krzyzewski his fourth national title, tying him with Adolph Rupp and putting him behind only the incomparable John Wooden, who has ten.  Two summers ago, Coach K also won a gold medal with USA Basketball.  Not a bad run. 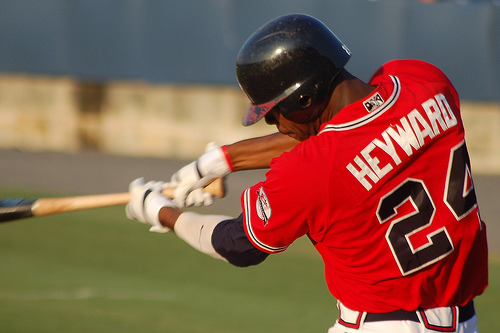 Perhaps it’s because of rookies like Washington’s Stephen Strasburg or Atlanta’s Jason Heyward, who Hank Aaron publicly claimed has what it takes to single-handedly bring African-American fans back to baseball.  Nothing like having one of the greatest home run hitters of all time put the pressure of an entire race on you when you’re not even of legal drinking age.

Maybe I’m looking forward to this season because the steroid scandal is one more year removed or because Bud Selig is that much closer to retirement.  Or perhaps it’s simply that baseball was my first love and I still haven’t gotten over the cancelled World Series.  But I’m getting closer.

Either way, a new baseball season means all teams start out with a clean slate, that is until the Royals and Pirates are mathematically eliminated from contention in mid-June.

For some reason, I have a feeling we’re in for a special season.

33 thoughts on “Chumpservations, Vol. 10: Donovan McNabb to the Redskins, Duke as national champions and the burden of Jason Heyward”