Most knowledgeable basketball fans agree that the five greatest NBA centers of all-time, in no particular order, are Bill Russell, Wilt Chamberlain, Kareem Abdul-Jabbar, Hakeem Olajuwon and Shaquille O’Neal.  It’s difficult to justify any other center cracking that top five.

Numerous other Hall Of Fame centers hover around that second tier of career big men:  Moses and Mikan, Reed and Robinson and of course, Patrick Ewing.

Ewing is currently on the Orlando Magic payroll as an assistant, coaching young Dwight Howard who is commonly regarded as the best center in the game today.  Howard’s ascendance under Ewing’s tutelage begs the question… when it’s all said and done, will Dwight Howard have a better overall career than Patrick Ewing? 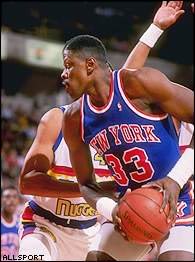 It’s a fair comparison.  Both big men were drafted number one overall, Ewing in 1985 and Howard in 2004.  Both shared the burden of bringing their franchises back to prosperity.  And both were the focal point of their team’s offense.

Despite never winning a title in New York, Patrick Ewing was dominant.  His Knickerbockers simply had the misfortune of running into Michael Jordan year after year.  Ewing averaged 21 points and 10 rebounds a game for his career.  He was on the original Dream Team.  The NBA voted him one of its 50 Greatest Players of All-Time.  Patrick was good.  Real good.

That being said, he never led the league in field goal percentage, blocked shots and rebounding in the same season.  That’s because no player ever had… until Dwight.  There’s no triple crown in basketball but that’s pretty darned close. 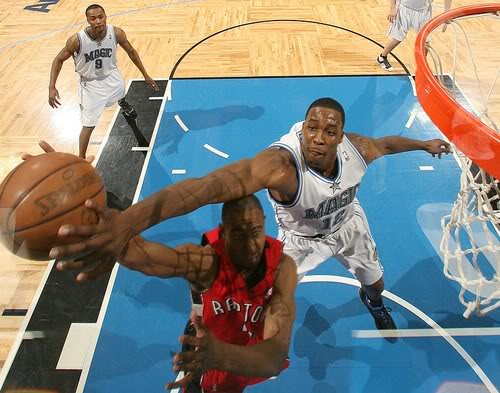 Comparing their first four years, Patrick outscored Howard while Dwight hauled in more rebounds.  Howard’s rebounding numbers may be slightly skewed as he never played alongside a power forward like Charles Oakley or Anthony Mason that could absorb some of his workload around the basket.  That doesn’t change the fact that Dwight is getting his rebounds rather handily.

Additionally, Patrick’s build was nowhere near that of the freakish Howard.  Howard outweighs Ewing’s playing weight by 25 lbs., 265 to 240.  It’s safe to assume that’s mostly muscle mass.  The rim can so attest.  Patrick had way better range (Howard has none) and could hit the occasional 17-footer, particularly late in his career.  It’s too early to see if Howard can develop that type of game.  Shaquille O’Neal never did and Dwight’s game is considerably closer to O’Neal’s than Ewing’s.  For now, Howard is more freight train than finesse. 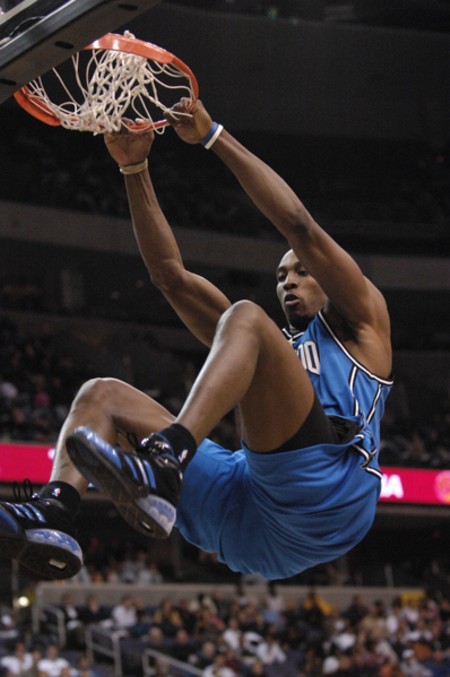 To say with any certainty that Dwight Howard will be a better overall player than Patrick after only five years in the league is pure speculation.  Drafted out of high school, Howard entered the league much younger than Ewing, who won a national championship at Georgetown.  Assuming longevity, his career numbers may be better but Patrick played for 17 years.  Howard will be fortunate to play that long.  As he ages, he’ll have to adjust his game as Patrick did.  The human body can only take so much pounding, even if it is Superhuman.

Winning the first championship in Orlando Magic history, and perhaps a few more after that, would likely vault Howard into consideration as one of the league’s best ever centers.  Getting into that top five will be a tough nut to crack but passing Patrick might not be after a few championships.  Winning a title is something that Patrick could never do.  As sports fans, we’re fickle, often valuing the number of rings on a player’s fingers more than his overall contribution to the game.  And Patrick’s was great.

The debate makes for good fun.  The fact that we’re even having this discussion means Dwight Howard is doing something pretty special right now.  At this pace and with successful managerial decisions, Howard should have a long, fruitful career in Orlando.  It will be up to Magic management to surround him with talent and not lose him as they have past superstars like Shaquille O’Neal or Tracy McGrady.

Howard may or may not become the player that Patrick Ewing was.  We’ll see whether the student can eventually surpass the mentor.  One thing is for certain, however.  We’ll enjoy watching him tear down the rim in the meantime.  And so will Patrick.

After all, Dwight might be able to give Patrick something he could never give himself: a championship ring.

92 thoughts on “Comparing the greats: Dwight Howard versus Patrick Ewing”