Even millionaires sing the blues.  After the 2009-2010 Dallas Mavericks, winners of 55 games, were eliminated from the playoffs by their in-state rivals, the San Antonio Spurs, Mark Cuban felt a need to go back to his gold-encrusted, drawing board… and probably mix himself a stiff drink while doing so. 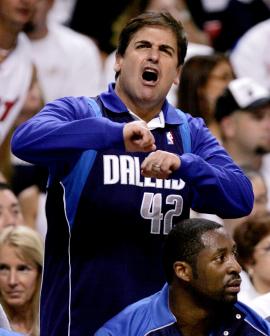 An apologetic and obviously dejected Cuban could only sit Thursday night (and throw a water cooler or two) as he watched his Mavericks fall short of winning a championship once again.

It might not be entirely fair to call this year’s Mavericks underachievers but big things were expected.  They now find themselves watching as Kobe, LeBron and a handful of other NBA superstars compete for a title, while their own star’s future hangs in the balance.  Greats like Charles Barkley, Patrick Ewing, Karl Malone and Dominique Wilkins all ended their careers without a coveted ring.  With every passing season, it looks more and more like Dirk Nowitzki might follow in their footsteps.

This summer, Nowitzki can opt out of the final year of his contract.  He’s the Mavericks all-time leader in points and rebounds.  He is the face of the franchise.  He has a combination of talent and size the league has not seen before.  He’s a former MVP and still a top ten, if not top five, player in the league.  That being said, he’s once again watching the rest of the playoffs from his living room, if he can bear to watch at all.

Mavericks fans should be accustomed to this by now, their shining moment coming in the Finals only a few years ago when they led two games to nothing over the Miami Heat.  Then Dwyane Wade came to life and the rest is history. 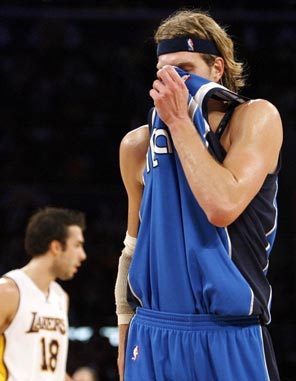 So where do we assess blame?  Cuban?  Nowitzki?  The coaching staff?  Pointing fingers in retrospect is always easy but it’s fair to ask why this team continues to come up short in the playoffs.  The lack of an effective, offensive post threat seems to be the common denominator in all of Dallas’ meltdowns.  Brendan Haywood’s and Erick Dampier’s combined 1-3 from the floor in an elimination game is a prime example.  Despite his seven-foot frame, Dirk is primarily a perimeter player and Dallas is primarily a perimeter team.

For a brief moment in Thursday’s Game Six, all seemed right in Dallas.  The Mavericks, record-wise the second best team in the Western Conference, were down by as many as 22, only to come back and take the lead.  Spurs fans will tell you they weren’t nervous but they’d be lying.  The last thing they wanted was to return to Dallas for a seventh game.

That never happened.  The Spurs held on and now advance to play Phoenix, who by the way feature a two-time MVP point guard who used to receive paychecks from none other than Mark Cuban. 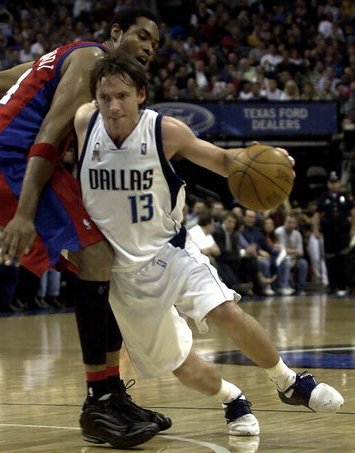 This, of course, is yesterday’s news, but one can only wonder what would have happened had the Mavericks held onto Steve Nash the years he went ape-shit, leading the league in assists and never shooting under 50% from the floor.

To suggest Steve Nash is better than Jason Kidd, the Mavs’ current point guard, makes for interesting debate.  Nash has two MVP awards, Kidd has none.  Kidd has two NBA Finals appearances, Nash has none.  But for the Mavs, Nash may have been the better fit.  He’s the consistent scorer the Mavs so desperately need.

Holding on to Nash isn’t the only ‘what if” Cuban is probably asking himself.  What if Dirk hadn’t landed his fourth foul in the first half of Game Six?  What if there wasn’t the pressure to trade Josh Howard, who at one point seemed to be the Mavs’ missing link?  What if Jason Kidd were able to shoot better than 30% from the floor when it mattered most?  And of course, what if they had a center who could score double-digits or at least take more than ten shots a game, something Dampier hasn’t done since coming to Dallas in 2004?

What team doesn’t need at least a serviceable center, someone who demands the ball and can take pressure off the rest of the offense, aka Dirk?  This year the Lakers, Jazz, Magic, Cavs, Hawks, Suns, Celtics are all still in the playoffs and all have big men that can score when called upon.  Even Jordan’s Bulls won six championships with a rotation of centers that were far more productive than anything the Mavs have had during their run.  Haywood and Dampier were noticeable if only for their ineffectiveness.

Winning in the NBA isn’t easy.  That’s why only a handful of coaches and superstars (Kobe, Duncan, Phil, Pop) boast the bulk of the rings while others (Karl, Sloan, Dirk, LeBron) remain on the outside looking in.  Heck, it took a miracle, and some crafty negotiating by Danny Ainge, to allow Paul Pierce, Ray Allen and Kevin Garnett to earn  just ONE championship.

As if this off-season weren’t going to be interesting enough with the impending free agencies of LeBron, Dwyane Wade, Amare Stoudamire and Chris Bosh, we can potentially add Dirk to that list.  Once Cuban has recovered from the disappointment, he’ll take another long look at his roster, most assuredly consult Nowitzki and determine what needs to be done to get over the hump.  Mavs fans are hoping they can do so because it hasn’t happened yet.

60 Replies to “Woe are the Dallas Mavericks”