So the Knicks Blog referenced an article written yesterday by Kevin Burke over at Hoops Doctor about how Isiah Thomas deserves an apology from Knicks fans. Tommy Dee refuted this nonsense in a post and has been talking about it on Twitter for a while, but he has let Kevin Burke off the hook. This post is epically terrible and a disgrace to Knicks fans everywhere. So I decided to break it down FJM style so at least something decent could come from this disastrous piece of work. Everything in bold comes from the mind of Kevin Burke while the regular text is my (witty) response. Enjoy… 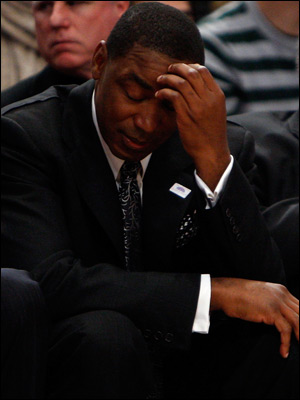 Solid intro. Disgraced, fired, punch line. I have read these reports and they are absolutely ridiculous. Thank goodness someone like you has taken the time to write a well thought out piece on why this is a terrible idea.

There is a huge misconception about Isiah Thomas’ tenure as GM of the Knicks. One that has gone on for far too long.

Well, I’m not quite sure what you are talking about. Are there a lot of people who think he is a former NFL linebacker or something? I can’t think of any other misconception one would have of the man.

This news of his possible (and probably unlikely) return to Manhattan finally provides me with the opportunity to set the record straight for “Zeke.” In sports, the GM of a team has two core objectives in his job description.

So. Two core objectives right? Before I read what you think they are, here are my guesses:

1. Regarding trades: Give away all of your first round picks. Rookies are significantly worse at basketball than players who have been in the league for more than one year. Also they are likely to be under 21 and cannot party with me at the clubs. Also, why should I be worrying about the future. Do you expect me to have a job in 3 years? Shame on you.

2. Regarding free agency: SPEND THAT PAPER! Leave the frugality for Wall St. If my boy James Dolan is cool with paying the luxury tax, then why not take advantage of it. What’s that? Salary caps are supposed to remain flexible? I’ll tell you what flexible is…go check out that secretary down the hall. Have you seen that ass? DAYUM.

Those must be the 2 objectives if we are going to consider Isiah a good GM right?

The first one is to improve the team’s roster.

Check! Oh wait…”improve”? Sorry I thought that said “fill with Overrated, Overpaid, Potential Suckbags.” I call it my OOPS strategy. Works every time.

Secondly, it is to put the best possible coach in place to direct this roster that you have assembled (if you have the type of control that Isiah was afforded).

You’re right, this is definitely the responsibility of the GM. But are you honestly going to try and make the argument that number 2 is equally as important as number 1? How many coaches will keep their jobs for more than 5 years in the NBA. I think it’s a well known fact with overwhelming evidence that the quality of players and how they play as a team is infinitely more important than having a good coach (barring a hiring of Mike Dunleavy, then you have no hope at all).

Breaking it down into those two categories is idiotic. There are like 20 different subsections of your arbitrary “improve the team’s roster” that are far more important than putting the best possible coach in place. Off the top of my head:

Fair point, as this is an awful team. For some reason you neglect to mention a huge point in favor of your thickheaded argument. The fact that Scott Layden was recognized (pre-Isiah) as arguably the worst GM in the league. So you could give the Obama excuse (which don’t get me wrong, I completely agree with) that he was stuck in a pretty terrible situation. But instead you say this: 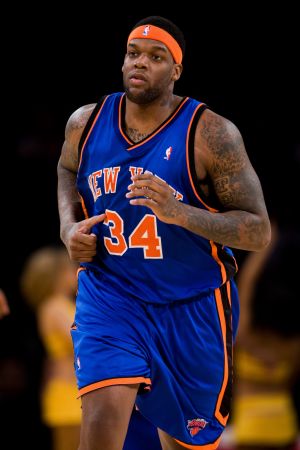 In no time, he eventually transformed that roster to Stephon Marbury, Jamal Crawford, Quentin Richardson, Eddy Curry (Granted, his salary has proven to be bigger than what he is worth, but people fail to realize that Curry was 20 and 9 for the Knicks in his best year there), Zach Randolph, Jalen Rose and Steve Francis.

HAHAHAHAHAHA ARE YOU KIDDING ME!

Are you genuinely making the argument that this is an improved team? Sure, on paper those are better names than the scrubs he was left with. But you can’t just cherry pick like that .What about the 4 (!?!?) lottery picks that were given up in the combined Fartbury and Fatty Curry trades? Take your time, go Wikipedia the draft picks that the knicks missed out on because of these trades. Then tell me that Isiah improved the team.

Because it’s just so infuriating that you would make this argument, do you actually think that Quentin Richardson, Jalen Rose and Steve Francis were good for the Knicks? I’ll give you a hint. NOOOOOOOOOOOO!

The head coach of the Knicks when Isiah arrived was Don Chaney. “Who?” I said, Don Chaney. Who did Isiah replace him with? Only the winningest coach in the history of the NBA at that time, Lenny Wilkens.

“Don Chaney was an NBA coach of the Year and a 2-time NBA champion. He was a valuable defensive assistant on the team’s staff.”

Just because you don’t do research and don’t recognize some guy’s name doesn’t mean he isn’t qualified to coach. He’s never read anything you’ve ever written and doesn’t criticize your idiotic posts (although I’d give him full permission).

As for your second cherry pick of the day, Lenny Wilkins is also the LOSINGEST coach of all time. See…I can manipulate words to help my argument also! How about we agree to disagree and call him the coachiest coach of all time. Fair?

Be prepared for some awesomeness coming up. This paragraph is so idiotic that I’m not going to even comment. He’s basically FJMing himself. 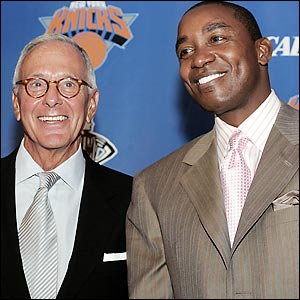 Nothing too serious. But, the Knicks still weren’t successful under Wilkens. Who did Isiah get to  eventually man the sidelines for the orange and blue after Wilkens, you ask? Oh, nobody. Just Larry Brown.  The same Larry Brown who just led the Detroit Pistons to an NBA Championship and the crown jewel of NBA head coaches at the time.

Wait for it…you ready?…here were go:

(I apologize, but I’m about to go off on a tangent, as I tend to do occasionally. But please stay with me). The roster that Larry Brown had was a very solid one: Marbury, Crawford, Richardson, Lee and Curry. As well as a descent bench. Larry Brown coached the Knicks to a 23-59 record, which was tied for a franchise worse, and he was completely absolved of any culpability. He walked away as the victim which still disgusts me to this day.  He signed a 5-year, $50M deal to coach the Knicks. He was only there for one season and got roughly $40M in a buyout.  So basically, he coached a team to the worst record in franchise history and was rewarded with $40M for one year. I was going to bring up the fact that he would also routinely call out his players to the media, rather than keep it in-house like he should, but I’m not going to even go down that road. Larry Brown did more harm to the Knicks that year than Isiah did, but nobody talks about Larry Brown.(Again, my humblest apologies. I’m back now).

Okay I lied, I can’t just leave this alone. Here’s the summary of the argument he makes regarding coaching and Larry Brown.

Point 1: Hiring the coach is 50% of a GM’s responsibility, in this case, Isiah Thomas’.

Point 2: In this regard, Isiah is great because he hired Larry Brown

Point 4: Larry Brown had a much improved roster. Better team, better coach, team should do better.

Point 7: Larry Brown was signed to a 5 year $50 million contract and is FIRED after one year (see point 1)

QED: Isiah is a good GM! (Wait what? How do you draw that conclusion?)

It’s almost as if Burke realizes mid-post that Isiah DIDN’T improve the team and DIDN’T hire a good coach, but has no choice but to keep going with this awful argument.

Where was I? Oh yeah. Objective #2 of improving the coaching situation: successful.

I actually laughed out loud after I read this sentence. Words cannot express how backwards and stupid this is (well except for his words, which do a pretty good job) 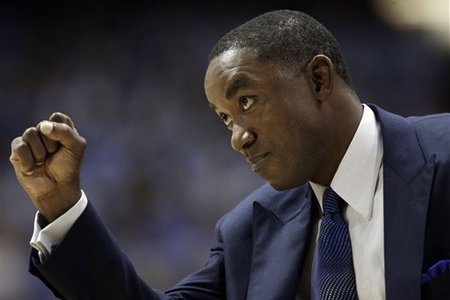 Isiah improved the roster and the coaching situation, but the team still wasn’t successful. How can that all be his fault? His critics love to harp on the fact that he overpaid for guys. In certain cases, yes, he did but at the time it didn’t prohibit them for acquiring anyone that they had their eye on. It wasn’t until Donnie Walsh took over and forfeited 2 seasons that we realized just how many hefty salaries he had acquired. But, he wasn’t planning for 2010 like Walsh was. He was planning for then.

In hindsight, Eddy Curry’s salary is obviously way too high, and he also overpaid for Jerome James at $30M for 5-years. But James just came off a pretty impressive playoff run (for his standards) the year before for the SuperSonics, and had many GMs across the league taking a look at him.

Isiah was definitely not an angel during his time in New York. The Anucha Browne Sanders harassment case, where she was awarded $11.6M in punitive damages, is evidence of that.

At this point, it’s starting to get repetitive.

But he became a punch line when he largely accomplished his two primary objectives in his job. It became cool to talk bad about Isiah.

No, it became hair-ripping-out-of-my-skull frustrating when he DIDN’T ACCOMPLISH ANYTHING!!! You couldn’t talk about the Knicks without mentioning Isiah because he had destroyed a storied franchise. It wasn’t cool, it was necessary.

Current GM, Donnie Walsh is 70 years old and has been going through health problems of late. That is why there is even speculation that a new GM is needed.  Isiah is most guilty for acquiring high salary guys. Donnie Walsh threw away 2 seasons by getting rid of those salaries in anticipation of a guy who never came. Which is worse?

Isiah threw away X number of seasons (you pick, because who really knows how many he screwed up in the future). Donnie Walsh spent 2 cleaning up his mess. Which is worse??? It’s like the dumbest math question ever asked. Please go away Kevin, you’re hurting my brain.

28 thoughts on “Isiah Thomas owes me an apology, NOT the other way around”