“You gonna watch the game tonight?” asked one passerby to another.

“You know I am.  I got my t-shirt in the car and I’m just waiting to get off,” the other answered.

This conversation, between two men who had never met, took place only hours before Game Five of the American League Division Series, the second biggest home game in Rays history.

Tampa Bay received a lot of criticism for its lack of attendance this season but even though fans didn’t turn out to the Trop in droves, there’s no denying the community is firmly behind this team.

Once thought dead and buried, the Rays vanquished a two-games-to-nothing deficit to force a fifth and deciding game against the eventual American League champion Texas Rangers.  Although they ended up losing, Rays fans area-wide couldn’t have been more proud of their team. 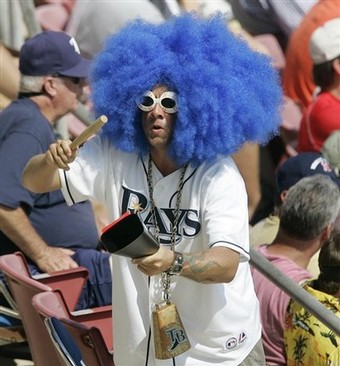 Don’t be fooled, people.  Rays fans aren’t flighty.  This area knows its baseball.  They know their lineups, they know their rotation and they repeatedly bemoan the coaching tendencies of the numerically-inclined Joe Maddon.

For example, there isn’t a person around who didn’t either openly dispute starting James Shields in Game Two, rip BJ Upton a new one for his cold, post-season start, question why Kelly Shoppach was in the Game Five lineup or hasn’t already concluded Carl Crawford will be wearing a different uniform in 2011.  Despite popular opinion, Rays fans are both dedicated and knowledgeable.

If work didn’t call that night, I’d have trekked across the water and purchased a ticket for Game Five for THAT was the atmosphere every sports fan wants to experience in person.  I chose instead, to watch at a local pub with some friends as soon as I got off work.  A season ticket holder told me later that the Trop was at standing room only.

Rays fans littered the restaurant I was at as well, only to leave disappointed.

In the end, a few costly mental errors and an inhuman performance from Cliff Lee cost the Rays their season. Weeks later, fans are still talking about the year that was and what could have been.

Look, the Rays have several obstacles no other expansion team has had to face:

Tampa is comprised of transplants, many of whom are Boston or New York fans.  Asking them to trade in the red socks or pinstripes they were raised on and begin cheering for another team, particularly one they see as inferior, is tantamount to asking them to give up their first born.

The Rays had the misfortune of being placed in the American League East, perennially the most competitive division in baseball.  They play baseball’s deepest payrolls 36 times a year.  Once considered a division doormat, the Rays can no longer be overlooked.

Tampa is the only Major League city which boasts a field bearing the name of its bitter rival’s late owner.  Steinbrenner Field, one of the most beautiful spring training facilities in all of baseball, stands right across the street from Tampa’s football stadium.

Derek Jeter has played 2295 games in a Yankee uniform.  The Rays have only played 2106 games in their entire existence.

Despite all this, and another year falling short of their goal, all is not lost as many local sportswriters would have you believe.  After the Game Five loss, Marc Topkin of the St Pete Times wrote this “could be the end of the Rays’ run of success.” Gary Shelton told Rays fans to “say goodbye to excellence” and that “the ride is over.” After watching the Rangers make quick work of the Yankees in the ALCS, the Rays performance doesn’t look all that bad in hindsight. 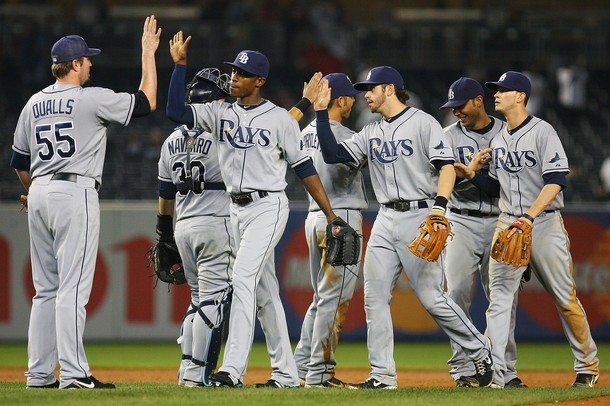 Were the Rays a better team than the Rangers, or even the San Francisco Giants, who barely made the post-season?  Perhaps.  Alas, it wasn’t meant to be.  That doesn’t mean this team, even with the forthcoming changes, won’t be back.

Ownership has made no secret of its plans to slash payroll but doing so and putting a winning product on the field are not mutually exclusive.  The Rangers proved you don’t need to break the bank to build a championship team.  Their payroll is considerably less than Tampa Bay’s.  All you need is a few key ingredients.  The Rays already have many of those pieces in place and a slew of young talent that’s dying to get into the lineup.

Next year the Rays will have one more year experience under their belt, another excruciating sense of underachievement to inspire them and a new generation of fans who weren’t raised on their parents’ passion for another team.

These Rays will not roll over.  Don’t be surprised if this team continues to exceed expectations.