Before I get into the rules of our first official Super Bowl contest, here are some initial thoughts on the NFL’s final four…. 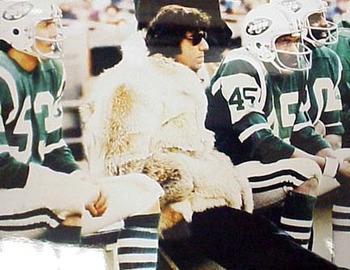 Now that we’ve got that out of the way, I would like to announce our First Annual Super Bowl Contest.  The winner will receive a brand, spankin’ new SportsChump hat to call their own.

But we’re not just giving them away.  You must first prove your football acumen. 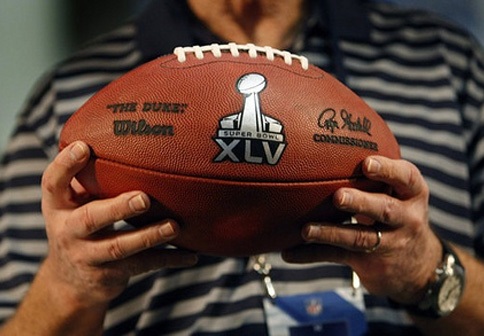 Below, provide the correct answer to the following four questions:

1)      Who will win the NFC Championship Game: The Green Bay Packers or the Chicago Bears?

2)      Who will win the AFC Championship Game: The New York Jets or the Pittsburgh Steelers?

3)      Which of those four remaining teams will win Super Bowl XLV?

That’s not all that difficult, is it?

In the comments section below, I want a detailed, educated, yet obviously fortuitous explanation with each answer.  I will also need a tie break, in case more than one of you miraculously manages to answer all four questions correctly.  The tie break will be the FINAL SCORE OF SUPER BOWL XLV, not the total score.

Personally, I have NO idea who will be crowned Super Bowl champions and I’ve already called the Seahawks-Saints, Green Bay-Atlanta, Jets-Colts and Jets-Pats upsets.  Fortunately I already have a hat.

So there you go, readers.  The gauntlet has been thrown down.  Prove to us all you belong in the SportsChump Hall of Fame by properly outlining the winner of each remaining game and your Super Bowl MVP and you’ll have a piece of the Chump to call your own. 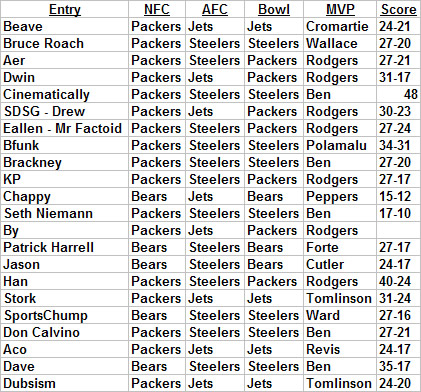 Here you have it, ladies and gentlemen.  22 entries!!  A fantastic turnout if I do say so myself.  As you can see, which is why I came up with the idea to begin with, the eventual winner at this point is anybody’s guess.

Keep referring to this page as I’ll keep things updated right here.  May the best prognosticator win and let the trash-talking begin. 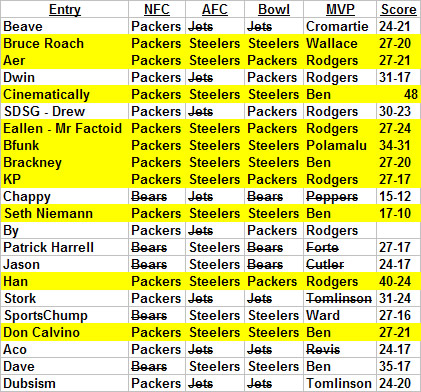 So the Packers and the Steelers are in the Super Bowl, meaning over half the pool was eliminated in the first week.  Just as I thought.  A hearty shout-out to Chappy who was the only person to pick BOTH games wrong.  He runs a sports website, y’all.  And honorable mention to Jason who thought Cutler would win Super Bowl MVP.  I haven’t seen a quarterback pull himself out of a big game with a phantom injury like that since Colt McCoy did so in the title game last year.  Oh… my arm… it’s broken.

That leaves us with ten entries left, 6 going for Pittsburgh, 4 going for Green Bay in what should be a helluva Super Bowl.  All four Packers entries have Rodgers winning MVP while the Pittsburgh entries are split between Ben (4), Wallace (1) and Polamalu (1).  Best of luck, gentlemen. 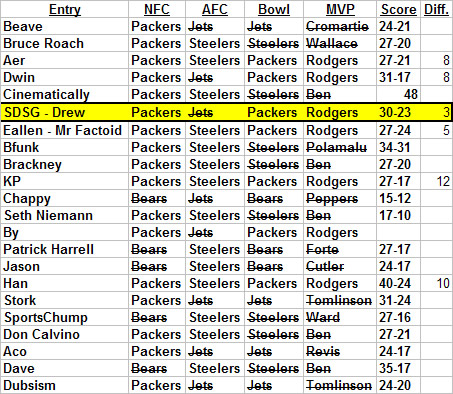 Ladies and gentlemen, we have our contest winner.  I would like to thank everyone for participating but in the end, there can only be one winner, one swami, one prognosticator extraordinaire, one person who knows  football better than anyone else, and that person is … Drew, the San Diego Sports Guy and only one of Shawn Kemp’s several, unfed children.  He is first on my blogroll and first  in your hearts.

Not only did he pick the Pack over the Steelers and Rodgers as MVP, but the Drewster was only a combined THREE points off the final score.  Quite impressive, sir.

So take a bow, Drew.  And don’t forget to e-mail me your address so I can send you some SportsChump gear to proudly wear out West.