Athletes have been known to endorse the oddest things: blue jeans, panty hose, bug spray, even erectile dysfunction medication. So why not a fragrance, right? 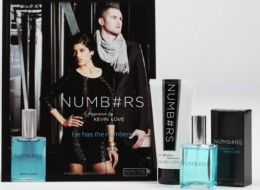 I sat there yesterday, watching my television as a scarved, Kevin Love walked slow-mo through a crowd of screaming fans, selling… cologne? The ad was so convincing, I had to look it up to verify whether it was real.

In an effort to get Kevin Love on to the NBA All-Star team, the Minnesota Timberwolves sent a bottle of Love’s cologne and aftershave, appropriately called “Numb#rs,” to the coaches responsible for All-Star voting. The video below was also sent.

Love leads the league in rebounding (15.6) and is scoring 21.6 points per game, but is buried on a small-market team with the second worst record in the league. He finished ninth in voting among Western Conference forwards.

Love might be hard-pressed to make the all-star team over Pau Gasol, Blake Griffin, Tim Duncan and Dirk Nowitzki (Kevin Durant and Carmelo Anthony were voted starters), but kudos to the T-wolves marketing department for showing Love some love in a truly original way.