When I first heard that Jerry Sloan, long time coach of the Utah Jazz, had retired due to an alleged altercation with point guard Deron Williams (which inadvertently led to both of them leaving Utah), I was immediately taken by surprise, even though we all know Coach Sloan never met a fight he didn’t like. Shortly after hearing the news, I sent out a mass email to the SportsChump faithful, asking everyone to send me their suggestions for the greatest individual feuds in recent sports memory.  I received an overwhelming response.

However, when everyone included Bird-Magic and Ali-Frazier in their responses,  I soon realized the subtle difference between feud and altercation, which was more what I was getting at.  While those rivalries defined modern sport, I was looking for specific instances or moments in sports when two guys, or girls, provided us with a ‘what the hell just happened and why can’t we all get along’ moment.

So without further ado, here are my own most memorable, individual altercations in sports.

For the longest time, Johnson and Mourning were teammates on the Charlotte Hornets.  Along with Mugsy Bogues and Kendall Gill, they put that expansion team on the map.  This was years before the Hornets moved from New Orleans to Oklahoma City and then back to New Orleans again. 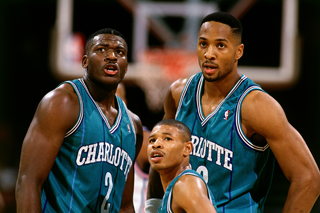 At the time, Zo and LJ appeared the best of friends but behind closed doors, this wasn’t the case.

In 1996, after Charlotte proved to be not big enough for the two of them, Zo was traded to the Heat and Johnson was sent to New York, setting the stage for an infamous NBA brawl only two seasons later.

The two got tangled up in Game Five of the Knicks-Heat playoff series and decided they had finally had enough of each other.  When you consider that Alonzo stands seven-feet tall and LJ is about 6-foot-10, this had all the makings of a championship bout, even though neither giant could land a punch.

The fight is, of course, most memorable for Jeff Van Gundy wrapping himself around Alonzo’s shins in an attempt to break up the fight and of course his unkempt comb-over as he emerged from the fracas. Even though these two former teammates and league MVPs never came to blows (the actual tussle between Shaq and Barkley was infinitely more entertaining), the Shaq and Kobe feud got pretty contested verbally, so I’ll include this altercation, yet accompany it with an asterisk.  Although no punches were thrown, at one point or another over the years, both probably wanted to.

In 2008, Kobe’s Los Angeles Lakers had just lost in the Finals to the Boston Celtics.  After winning a title with Dwyane Wade in Miami two years earlier, Shaquille (at the time) had one more ring than Kobe.

During an impromptu rap at a New York City night club, Shaq went all 8 Mile on the Mamba, telling him to “tell him how his ass tastes,” ranking right up there as one of sports more memorable, yet atonal, eff yous.

Of course we all know Kobe had the last laugh, winning two more rings in Los Angeles without his former sidekick and probably selling just as many rap albums. 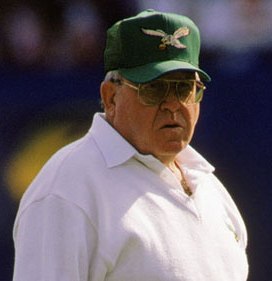 I live in Florida so I know the elderly have a tendency to get a little testy.  But when a sixty-year old Buddy Ryan slugged offensive coordinator Kevin Gilbride on the sidelines of a Jets-Oilers game, well, let’s just say most watching did a double-take.

Ryan’s defense had been pitching a shutout until Gilbride’s offense threatened that by turning the ball over just before halftime.  What did they expect?  Cody Carlson was their quarterback.

Let’s just say it looked like someone had taken the last crab cake off the early bird buffet because Ryan went vertical – as vertical as a sixty-year old man can – landing a shot on Gilbride’s jaw and reminding us all where his Buddy’s son Rex gets his combustible personality. 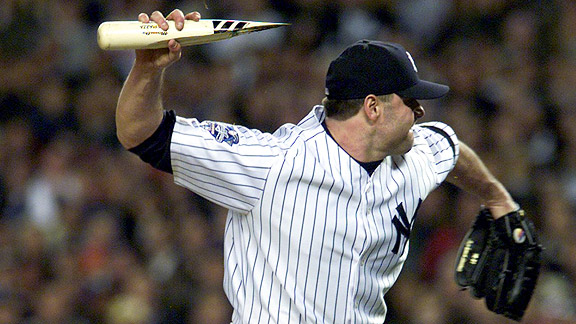 This was another totally bizarre occurrence for anyone watching this World Series but knowing what we know now about the effect of steroids, throwing a half-broken bat at someone, then explaining that it was the ball, makes perfect sense for someone with ‘roid rage… allegedly.

Funny thing was, I was an unabashed Red Sox apologist back then and even though Clemens was wearing pinstripes at the time, I can remember defending him until I was blue in the face.  Deep down inside, however, I knew that in all my years of playing baseball, I never confused a bat for a ball.

Both benches cleared but no punches were thrown even though this was another time everyone watching secretly wishes there were.

In keeping with the Red Sox theme, if there were ever two specific altercations that defined the century-old bitterness of a sports rivalry, it would be Jason Varitek ‘mitting’ Alex Rodriguez (no, he wasn’t feeding him popcorn) and Pedro Martinez throwing a charging, and significantly older, Don Zimmer to the turf. 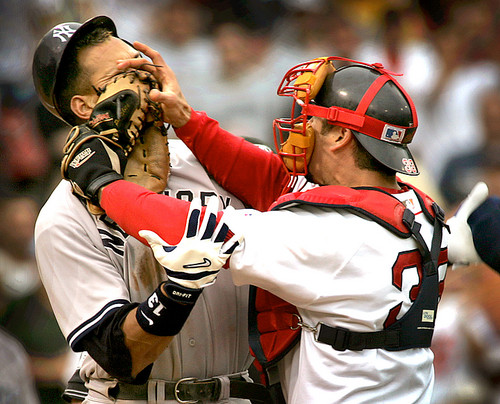 At that point in time (2003), ARod was baseball’s golden boy, its several hundred million dollar man.  Nobody ever messed with him… until Tek.  That one altercation occurring at home plate, plus the Zimmer throw-down that happened a year earlier, coincided with the Boston Red Sox finally overcoming their pinstripe inferiority complex that had haunted them since Babe Ruth skipped town in 1919.

These two incidents symbolized that Red Sox nation was not going to sit idly by while the Yankees continued their dominance, and even though most of us loved seeing ARod get smashed in the face, even though the most apologetic Red Sox fan found it hard to defend Pedro for treating the 73-year old Zimmer like a rag doll

Either way, these moments represented a changing of the guard, at least for a little while, as the Red Sox went on to win the World Series in 2004 and again in 2007.

This throwdown was just weird.  A seven-foot-four black guy squaring off against a six-foot-one (allegedly) white guy. 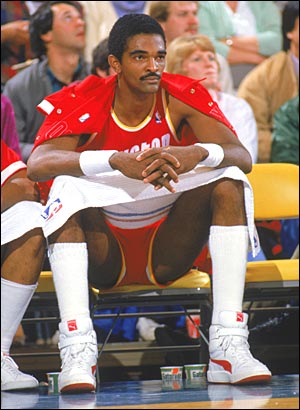 In 1986, the Houston Rockets finagled their way into the NBA Finals on a miracle turn-around jump shot by Sampson, denying basketball fans the chance to watch another epic Lakers-Celtics series.

The fisticuffs took place in the second quarter of Game Five.  The considerably shorter Sichting was forced to cover the considerably larger Sampson on a switch.  Apparently, Sampson didn’t take too kindly to a guy half his size boxing him out and figured punches were the best way to retaliate.

That didn’t turn out too well for Sampson as he was eventually body-slammed to the floor by Bill Walton and ejected from the game.

The Celtics went on to win that series and things would never be the same for Sampson after that, for he could never shake the reputation of not picking on a guy his own size.

This altercation might go down as one of the biggest mismatches in sports.  Let’s just say the old flamethrower got the better end of this deal. 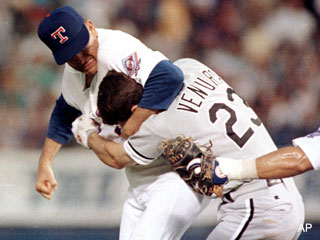 It was back in 1993 when Robin Ventura, an up-and-coming all-star, disapproved of some high heat that Nolan threw his way.  In what can easily be considered one of the dumbest decisions of all time, Ventura charged the mound to retaliate, only to be immediately put in a headlock and be pummeled repeatedly by the elder statesman.

Ventura went on to have a respectable career but will always be better known for the day he got his ass kicked by one of the greatest pitchers of all time, who was also twenty years his senior.

51 thoughts on “The 13 most memorable individual altercations in sports, Part One”