Welcome one and all to SportsChump’s Second Annual March Madness Bracket Bonanza.

As you may recall, poker star, avid Chumpeteer and college basketball prognosticator extraordinaire, Stevie Y. (the handsome gentleman to your right), proved he was smarter than everyone else by taking home last year’s grand prize: a SportsChump t-shirt to call his own.  This year’s prize: FreeDarko’s highly coveted The Undisputed Guide to Pro Basketball History, a must for any Basketball Jones.

All you need to do is predict the future.

This year’s contest will be held exactly like last year’s.  The 2011 NCAA brackets are as follows:

No. 3 Purdue vs. No. 14 St. Peter’s
No. 6 Georgetown vs. Southern California-Virginia Commonwealth winner (First Four game in Dayton)

In Cleveland
No. 1 Ohio State vs. Texas-San Antonio-Alabama State winner (First Four game in Dayton)
No. 8 George Mason vs. No. 9 Villanova

In Tampa
No. 5 West Virginia vs. UAB-Clemson winner (First Four game in Dayton)
No. 4 Kentucky vs. No. 13 Princeton

In Washington, D.C.
No. 1 Pittsburgh vs. UNC-Asheville-Arkansas-Little Rock winner (First Four game in Dayton)
No. 8 Butler vs. No. 9 Old Dominion

Your first task is to choose the ONE team from each foursome above that you think will reach the Sweet 16.  For example, for the games held in Denver, choose the one team (either BYU, Wofford, St . John’s or Gonzaga) you think will survive through the first Sunday. 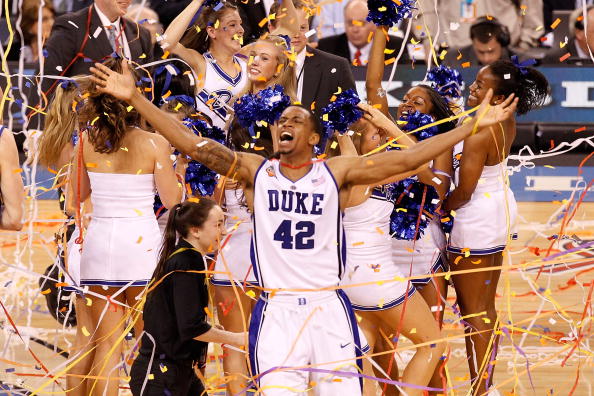 List ONLY your sweet sixteen teams in the comments below.  After the first two rounds are complete, you will then be asked to pick the winners of later rounds based upon which teams you have remaining.

To the victor go the spoils, your name under Yaz’s in the SportsChump Hall of Fame, FreeDarko’s latest hardcover and bragging rights for a year.

Have you ever had one of those friends as a kid, who would come over to your house and play with all your toys, to the extent that you no longer wanted to invite him over.

Well, people.  That’s Yaz.  I am going to have to stop sending him invites to my SportsChump contests because he is making a mockery of us all.  Last year’s champion is at it again, leading going into Saturday’s matchups with 15 of 16 teams remaining.

Things get kind of muddled after that with ten of us having 14 of 16 left, including Mr. Balzac, aka Partykiller, who mistakenly thinks he’s “Winning” (see comments below).

Among those of us that know hoops, Heavy D brings up the rear with only 11 teams remaining, and in an effort to see how many teams he can actually guess wrong, Raybolts only has 8 of 16 teams left.  Stick to picking baseball and hockey, sir.

This page will be updated with standings either late Sunday evening or early Monday morning depending on how many mojitos I’ve had poolside Sunday afternoon.

Have a great weekend, gentlemen and Yaz…. Nobody likes you.

Just like last year, you can ONLY USE THE TEAMS YOU HAVE REMAINING to choose your winners from here on out.  In the comments section below, I need you to fill out the entire rest of your brackets.  Pick your winners for the Elite Eight, Final Four, championship game and national champion and please do so in intelligible format.

Again… if any of your teams have been eliminated into the round of 8, you CAN NOT gain points for that round.  If you can’t pick 8 teams for the next round, so be it.  Just list your possible winners.  For example, I selected neither Pittsburgh nor Utah State to advance in the top half of the Southeast bracket, so I cannot gain points for that particular (Butler-Wisconsin) game.  But as I still have North Carolina alive and not Marquette in the East, I will obviously choose North Carolina and hope they win to gain five points in that particular matchup.

Please ensure that I have correctly tabulated your total points and remaining teams below.  If not, let me know.

To review the scoring, five points will be awarded for each team properly selected into the Elite Eight, seven points for each Final Four team selected, nine for each team you predict into the final game and eleven for correctly picking the national champion.  As a tiebreak, please list total points in the championship game.

Here are the updated standings…

Great tournament so far.  We have a four-way tie for first between some old school Gainesville folk: Balzac, Damion, G Mony and myself.  (Gentlemen, I’ve already read the book and would really like to give it away as a prize).

Picking up the rear, we have CgatorB and Raybolts.  Chip and a chair, gentlemen.

Good luck the rest of the way.

Ladies and gentlemen, we have ourselves a new leader… and he even called his shot while picking his winners.

That’s right, the heaviest of all D has taken a commanding lead, and by commanding, I mean two points, but there’s more to come.  As the only person to recognize that Buckeyes do what they do and pick UK to advance over them, D shot to the top of the barrel.  He also has all four of his Final picks alive.  This thing may be over, folks.

Here are the updated standings: 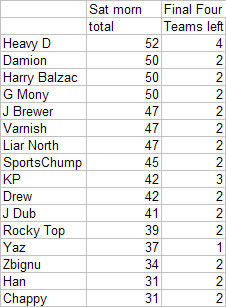 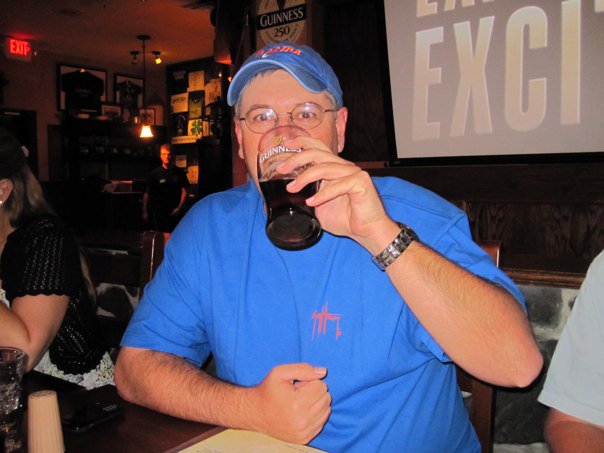 Ladies and gentlemen, I would hereby like to congratulate our winner:  college basketball guru and game-picker extraordinaire ….  Heavy D!  Take a well-deserved bow, sir.

With three games remaining, D has already sealed the deal.  Not only does he hold a two-point lead, he is the only contestant who can still gain any points, as he chose UConn to make it to the Final game.

Congratulations, Dave, on a game well-played.  You can tell Yaz next time you see him that there’s a new sheriff in town.  Don’t forget to email me your address and I’ll get the book out to you asap.

Thanks again to all those who participated.  Wild one this year, huh?