I self-edit, which can be a good thing… and a bad one.

Such are the benefits of running one’s own website.  Maintaining one’s own viral venue with no producers, editors or censors in sight means I am allowed to speak my mind freely.  I answer only to you: the reader… and of course, my own conscience.

There are also drawbacks to self-editing.  I know one punctuation error, misspelled word or incoherent concept will lose your attention.  (You guys still there?)

Fortunately, I was blessed with the ability to spell properly, but just like everyone on the planet who’s ever used a word processor, I still rely on Word’s built-in spell check to correct mistakes when they happen.  After all, there’s always a chance of a spastic forefinger hitting the ‘Y’ instead of the “T.’

Nobody complained about the invention of spell-check.  Who the hell does this computer think it is to correct MY spelling?!?  We welcomed it.  Without it, we’d remain a nation of misspellitude.  Spell check is the perfect example of what technology can do for us.  Why put out a blemished product when, with little inconvenience, we have the ability to un-blemish?  It’s why there are erasers on pencils. 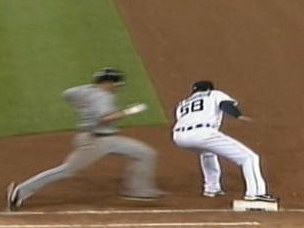 I’m not here to get on my soapbox and proclaim the need for instant replay across the board.  Nor am I suggesting that entire seasons have been affected by a missed call or two.  But someone has to offset the purists.  So why not me?

When Major League umpires are calling for instant replay to help them out, that should give us some indication of the internal need to make things right.  The last thing any professional, in any field, wants is to make an error in judgment.  The days of Wite-Out are over, gentlemen.  Poor Jim Joyce probably still has nightmares about that June night where he single-handedly altered baseball’s record book by calling the final out safe, and robbing Armando Galarraga of a perfect game.

I don’t see what we’re so afraid of.  Umpires aren’t suddenly going to be replaced with robots.  Replay exists simply to ensure a game is called properly.  What’s wrong with that and why are so many still against it?  A ball is either foul or fair.  A runner is either safe or out.  There is no gray area.

By and large, the NFL has improved its product by implementing instant replay.  Missed calls are corrected and robots have not yet taken over. 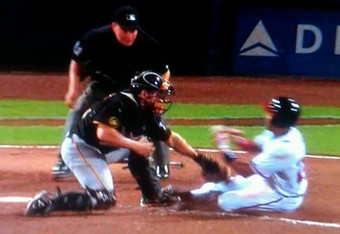 Just like when I misspell a word, my reader is turned off, when a call is blown in a baseball game, the fan is turned off.  The errors discredit us both.  Imagine a utopia where we are all given the opportunity to erase our past mistakes.  How much would some of us pay for that luxury?

Or we can all go on misspelling and take our chances.