Anyone who’s been watching the Rays chase down the Red Sox for the lone American League wild card spot knows Tampa Bay’s pitching staff (3.59 team ERA, 2nd best in the A.L.) has kept opposing hitters on their heels all season long. 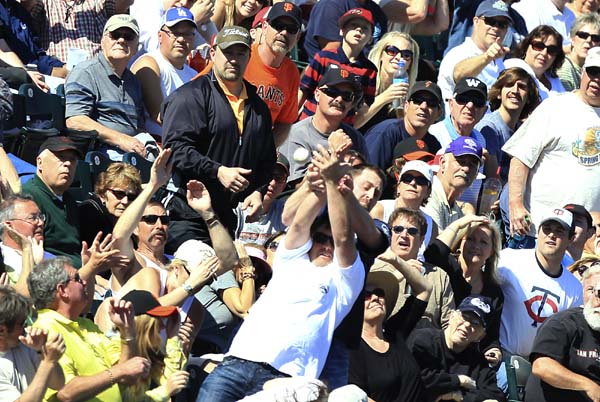 Lately, I’ve seen countless baseballs, and even several bats, careen dangerously into the stands, which begs the question… what is acceptable behavior when catching a foul ball?

In a crowded stadium, when a foul ball flies into the seats, it’s not uncommon to see rabid fans throwing elbows, scratching and clawing, losing their balance (and their sensibilities) while jockeying for position into the projected spot said baseball might land, all the while potentially hurting someone, just for the opportunity to catch an item they can much more easily purchase at their local K-Mart for $2.99.  I know times are tough, but goodness.  It’s all fun and games until someone loses an eye.

Are the memories of catching a foul ball really worth risking bodily harm?  Son, remember that time I took you to the ballpark and we wrestled that person to the ground for this here baseball?  Good times!

Why do we suddenly, almost inexplicably, reduce ourselves to caveman status for a simple piece of rawhide?  Never mind the fact that these line drive projectiles often fly at us at speeds in excess of 100 mph.  If I’ve got a Fenway Frank in one hand and luke-warm, over-priced beer in another, with no means to protect myself, consider me ducking.  No souvenir is worth a black eye or getting jacked by some crazed fan who doesn’t know how to behave around his fellow man.  Isn’t it more far gratifying to give the ball you just caught to the six-year old sitting next to you, rather than stepping on his neck to catch it? 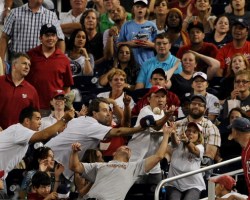 Civility ends where foul balls begin.  Ballparks become bar brawls at the crack of a bat.  I’ve been in my fair share of bar fights.  Trust me, they never end well.

So how do we determine protocol?  After all, this isn’t Central American soccer.  A century’s worth of baseball games and haven’t we established some sort of rapport with the fans next to us by simply saying “I got this!”  Instead, we resort to clawing him in the face?  Just doesn’t seem right.

Fans, I know we can be crazy when our team’s livelihood is on the line but let’s come to our senses when it comes to snatching a (very small) piece of Major League history at the expense of another’s well-being.

The memories of attending the game should be good enough.

32 thoughts on “Fair or foul? Reconsidering human behavior when souvenirs fly our way”