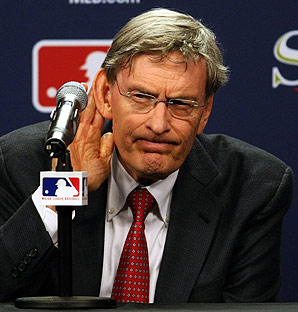 I have a beef with the Commissioner.

My complaints are not the usual you’re a former owner, crypt-keeper look-alike, turn a blind eye to steroid use, All-Star Game ending in a tie, type of beef.

This is a legitimate complaint and as usual, I’m sure it will fall on deaf ears.

Christmas came early in the Selig household this year.  Bud was just handed the greatest gift he could ever ask for: attention.  Fans nationwide were just witness to perhaps the greatest end to a Major League season in history.  Or at least the most talked about.  Think about it.  When was the last time you had your eyes glued to the outcome of a regular season game, never mind four of them?  Thursday, with the Braves, Cardinals, Red Sox and Rays goings on, baseball was all anyone could talk about.

The Rays came back from a seven-run deficit to eke into the playoffs.  They’re a perfect example of everything that’s right with baseball: a low-budget, small-market team that plays its ass off, topples Goliath and shows us all that money can’t buy love.

So what does Bud Selig do to reward them for their spectacular season?

He schedules their first home playoff game the same day, a mere three hours before the BUCCANEERS host the first Monday Night Football game they’ve had in eight years!  (Thanks, Fibbs) 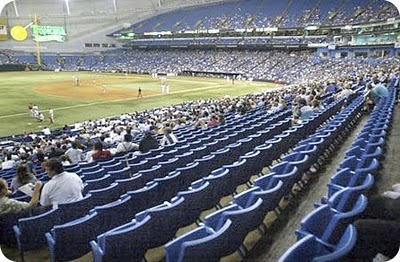 As most baseball fans know, the Tampa Bay Rays already struggle to pull in fans.  Despite fielding a team that made the playoffs – with a payroll one-quarter Boston’s, mind you – Tropicana Field is only averaging about 19,000 fans per, second worst in the league.

Wouldn’t it be beneficial, kind even, for Major League Baseball to show a little flexibility and adjust Monday’s 5:07 start time to either earlier, or better yet, another day?  Or does throwing a bone to a franchise and city that so desperately needs it simply make too much sense?

How are local sports fans supposed to cheer on both hometown teams this Monday?  I’ve had plans to go to this Monday Night Football game for weeks.  So my reward is not getting to watch the Rays as a result?  Thanks, Bud.  Thanks a lot.

Look, Mr. Selig, we know Major League Baseball hinges on the fact that it still thinks it’s our national pastime, but you and I both know the NFL rules.  Thinking otherwise is living in denial.  Scheduling the Rays first home playoff game hours before the biggest draw in town not only makes bad business sense, it’s mindless and inconsiderate.

So, dear Commissioner, on behalf of the entire Bay area, I would like to wish you a wholeheartedly, sarcastic Thank You Very Much from the bottom of our hearts.

Here’s hoping we meet your Brewers in the World Series.