Far be it from me, a lifelong Red Sox and newly reformed Rays fan, to make fun of the New York Yankees the day after they were eliminated from the playoffs.

In yet another example of Money Can’t Buy Me Love, the Red Sox ($162 mil) and Yankees ($203 mil) have both started their winter vacations far earlier than expected.  Rich, huh?

While some high-priced rosters still remain alive this October, only Philadelphia ($173 mil) boasts the gaudy payroll of the other two Goliaths.

So to celebrate the demise of all things pinstripe, which is always fun anywhere outside the Bronx, I proudly present this week’s caption contest.

Seen below, after striking out for the second time in three innings with a chance to tie or win the ballgame, Alex Rodriguez walks dejectedly away from home plate while the Tigers celebrate.

If it weren’t for the fattest payroll and richest player in baseball, I wouldn’t kick a man, or team, while they were down.  But screw ‘em.  They’re the Yankees.  Have at it, people.

The winner of this week’s caption contest will receive box seats to see the Yankees play in the American League Championship Series. 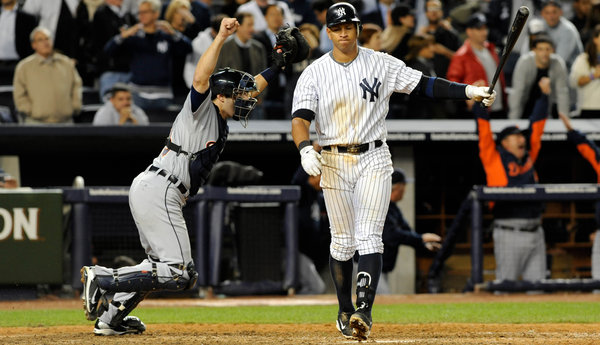