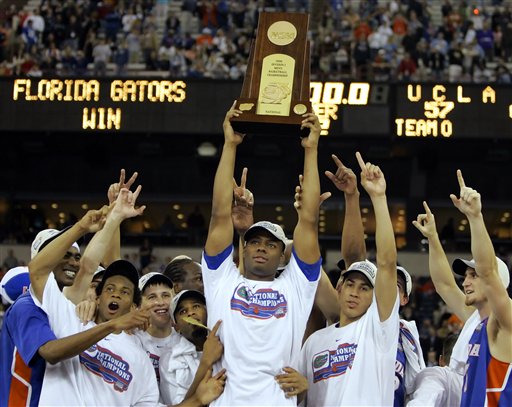 It’s been a while since I’ve written a Gator basketball preview.  There’s good reason for that.  To be perfectly blunt, over the past few years, the University of Florida’s basketball program has been relatively irrelevant.  By comparison, from 2005-2007, the school outfitted one of the most dominant teams college basketball had ever seen.

It’s not our fault Billy Donovan spoiled us.

After Joakim Noah, Corey Brewer, Al Horford and company left Gainesville for the NBA, the program suffered, or at least failed to live up to the lofty expectations it had just set.

The year after winning their second of two national championships, Florida finished 8-8 in conference play.  Although they made the NIT’s Final Four, it was a far cry from their previous accomplishments.  The 2008-9 team followed that season with another NIT appearance.

In 2010, Florida made it back to the tournament that matters, but lost a first-round, overtime heartbreaker to BYU.  Last year, they lost to Butler in the round of eight (a game they should have won) but more importantly, they won the SEC again.

Finally, progress was being made. 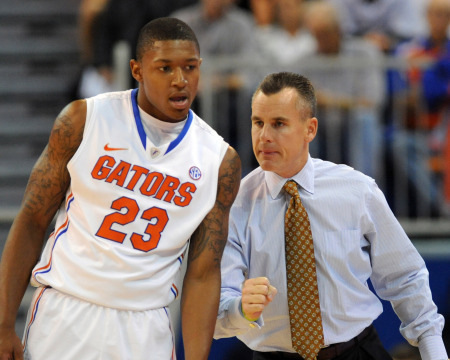 2011-12 should see continuation of that progress.  Billy the Kid has reloaded and it looks like Florida’s inching closer to returning to championship form.  For the first time in five years, they opened the pre-season ranked in the top ten.

Enter incoming freshman Bradley Beal and Rutgers transfer Mike Rosario to add some well-needed scoring.  Combine that with returning guards Kenny Boynton and Erving Walker and big men Erik Murphy and Patric Young, and the Gators are as balanced as they’ve been in years.

When I heard the Florida hoopsters were coming to Tampa, I was eager to see if this younger generation of Gators could live up to their top ten billing.  Even though their opponent that evening was Wright State, I still wanted to get a feel whether my alma mater was on the right track.  God knows their football team isn’t.

The newly refurbished Ice Palace was relatively empty Monday night.  Attendance was listed at 6,331 and we all know what that means.  Fans could sit wherever they liked. 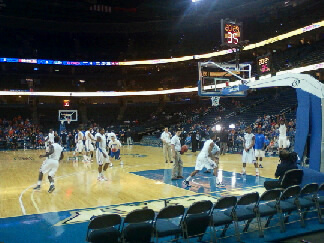 At first glance, these new-look Gators appeared young and skinny, but in outstanding shape, just as one would expect from the Florida program.

I was excited to see Beal, an aggressive young guard/swingman the likes Florida hasn’t seen in some time.  I had heard Ray Allen comparisons but let’s not bring up the NBA, shall we?

Beal did not disappoint, nor did the more experienced Boynton.  The junior guard got off to a hot start, hitting two early three-pointers.  Beal soon followed with a nice, baseline jam after juking his defender right-then-left, and then hit a three-pointer of his own.  This bodes well for Florida.  When clicking, the new B&B boys should be tough to defend.

Rosario adds some punch to the lineup and should see consistent play.  He’ll average around double digits on the season, but along with Walker, that leaves four perimeter players who will compete for major playing time.  Donovan will have to manage those minutes effectively.

Early on, Donovan has stressed the importance of getting the ball in to his big men, Young and Murphy.  We’ll see if the guards are disciplined enough to do so, and whether the two big men, who each stand about 6’9”, will be able to score consistently when that happens.  They’re currently averaging eleven points per game.  Donovan would undoubtedly like to see that number increase as interior scoring will be crucial come conference play. 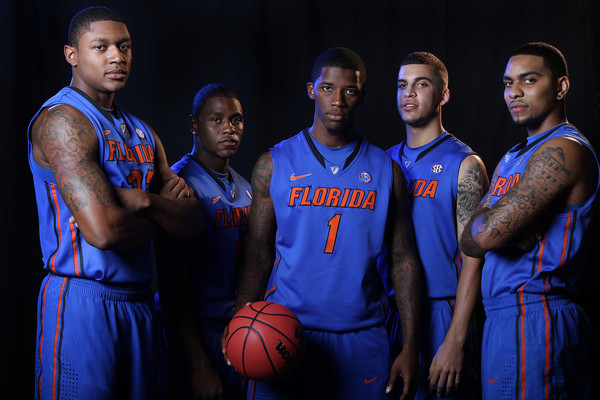 Florida has its share of weaknesses.  They’re talented, but young and undersized.  Brewer, Horford and Noah ran 6’8”, 6’10” and 7’0” across the front line.  At this point, Young and Murphy, who combined 3-9 shooting on the night, are nowhere near as polished or dangerous.  And before you think those comparisons are unfair, remember those three were sophomores when they won they first national championship.

This team runs even smaller when Rosario (6’3”), Boynton (6’1”), Beal (6’3”) and Walker (a Flutiesque 5’8”) are all on the floor at the same time.  They could quickly become a Villanova if they’re not careful.  They’ll have trouble against beefier teams on a cold-shooting night.

But this Monday was all about Boynton and Beal, who finished the night with 22 points each on a combined, and rather efficient, 13-for-22 shooting.

From what I could tell, it’s only a matter of time before Beal is running this team.  Much of the offense already runs through him, and rightfully so.

For the Florida faithful, it has to be good to see that Coach Donovan has once again recruited some talent to Gainesville.  His newest team will have to forge its own identity.  Once they do so, time will tell whether that will be good enough to bring the program back to the excellence to which it’s accustomed.

20 thoughts on “How soon until a return to greatness: A Florida Gator basketball preview for 2011-2012”