I was hanging out with Tim Tebow the other day.  Okay, so I wasn’t, but it makes for good blogging.

I was excited to spend time with a fellow, Florida alum and the most talked about football player since Brett Favre.

I decided to drive him around town and show him some of the local sites.

I got into my Passat, Tim hopped into the passenger seat and we headed over to the mall.  As soon as we drove off, Tim astutely pointed out that I hadn’t yet fastened my seatbelt.  I told him I was about to when he gave me a disapproving look.  So I put it on.  I didn’t want to spoil the day.

On our way to the mall, I made the mistake of driving a few miles over the speed limit, going 50 in a 45.  I was familiar with the area and felt I was driving at a safe speed but Tim kept peering over at my speedometer and shaking his head.

We eventually pulled into the crowded mall parking lot.   Since I was getting on the hungry side, I neglected to stop at one of the mall stop signs.  A security cop in a golf cart sped up to us as I pulled into my parking space.  Fortunately, the mall cop was also a Gator fan.  He took one look at who was in my passenger seat and let me off the hook with only a warning.

As we strolled into the mall, crowds gathered, probably because I was wearing a fashionable SportsChump t-shirt.  Tebow graciously signed autographs, giving special attention to fans who asked him to do so on recycled paper.

After the throng died down, I told Tim I was in the mood for some wings or a greasy burger.  He opted for the grilled chicken and a salad with light raspberry vinaigrette.  The waitress brought me a beer.  Tim had water with lemon.  I drank some beer and belched, Tim winced.

It was becoming obvious that Tim and I were quite different. 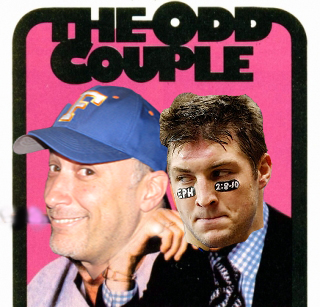 After our meal, I stepped outside and lit a cigar, only to have Tim warn me about the correlation between smoking and lung cancer.  I extinguished the cigar.  The day was becoming a bore.

I suggested we go meet some girls, finally an area in which I had more experience than the former Heisman Trophy winner.  After a few more drinks (not for him obviously) and a few girls glancing our way (looking at me, of course), I suggested we go mingle.  He looked at me aghast, told me he was saving himself for marriage then lectured me about the virtues of true love and the dangers of pre-marital sex.  I had had enough.  I told him I had been having pre-marital sex for nearly thirty years and was having a pretty good go at it.  Once again, he shook his head.

What’s the moral of the story?  I’m guessing you can figure it out.

* Be the first on your block to become a free subscriber to sportschump.net via e-mail or RSS feed.

52 thoughts on “My afternoon with Tim Tebow: A work of complete and total fiction”