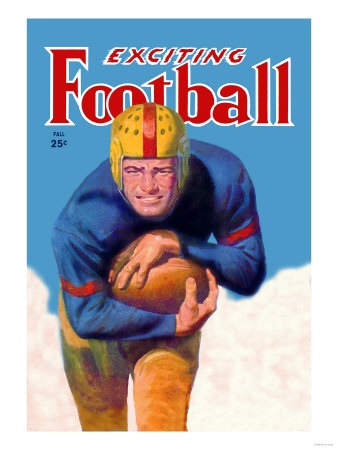 Wow, what a Sunday of football!

Going into the weekend, the New England Patriots were essentially even money to win Super Bowl XLVI.  When I saw that the Baltimore Ravens, who in my opinion had as good a shot as any to win it all, were six times the underdog, I dropped a friendly wager on them with the hopes of a healthy come back.

But I did pick the Pats in my own contest and isn’t that all that really matters?

Going into the AFC Championship game, I figured if the Ravens could control time of possession, they had a chance.  Three consecutive three-and-outs to start the game, however, did not bode well.  Baltimore could not move the ball early and the echoes of whether Joe Flacco is their man started to murmur.

I was soon reminded why betting against Tom Brady is a bad idea.  As they say, Brady’s favorite receiver is the guy that’s open.  On New England’s second possession, Brady completed passes to six different receivers, taking an early 3-0 lead.

We all knew the Ravens couldn’t win this game if they started every possession from their own twenty- yard line.  They didn’t, thanks to a first quarter interception by Lardarius Webb which led to Baltimore tying the game at three.  But touchdowns, not field goals, win football games. 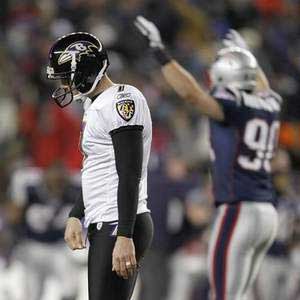 The Ravens had every opportunity to come out on top, yet a dropped Lee Evans touchdown reception and a missed Billy Cundiff field goal cost me thirty dollars and Baltimore fans a chance at glory.

Quoth the raven, until next season.  The Patriots advanced.

Anticipation brewed over to the second game, 49ers-Giants for the opportunity to play New England in the Super Bowl.  Could the Niners continue their dream season or would we have a rematch of Super Bowl XLII?

It was another hard-fought battle between two evenly matched teams.

Midway through the third quarter, a wide open Vernon Davis caught his second touchdown pass of the game, giving the Niners the lead for the second time.

Shortly thereafter, the Giants began to melt down, committing several costly penalties, until the tide turned back to New York’s favor once again when a punt inexplicably bounced off the knee of Kyle Williams, who was subbing for the injured Ted Ginn, Jr.  The ball was quickly recovered by the men in blue and culminated in a second Giants touchdown: Manning to Manningham.

After a Niners field goal tied the game, the NFC Championship Game resembled its earlier counterpart, tooth and nail.  The fourth quarter became a war of attrition, a battle of sacks and punts.  It was only fitting the contest go into overtime, which it did. 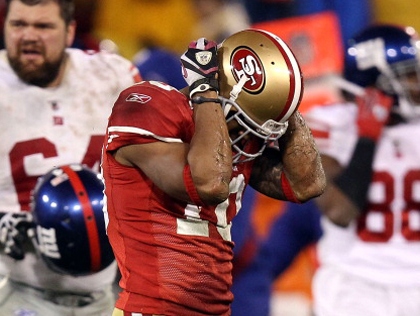 Overtime was a punter’s delight until, much to the 49ers’ dismay, Kyle Williams effed up again.  He fumbled a punt return which the Giants recovered, allowing the much maligned Lawrence Tynes to nail a 31-yard field goal and propel the G-Men to Super Bowl XLVI (that’s 46 for you non-Romans)

Unless there’s an NFC-AFC consolation game, the Harbaugh Bowl will have to wait for at least another year.

Now on to the contest that REALLY matters…

Honorable mention goes to both Dubsism and Chappy who, aside from running fabulous websites, cannot pick football games worth a damn.  Both of them had the Ravens and the 49ers in the Super Bowl.  To make matters worse, Chappy predicted Billy Cundiff would win Super Bowl MVP.  Dwindy, albeit an ardent SportsChump supporter, also pooped the proverbial bed.  He can’t wait for NASCAR season to start.

Only eight of our 19 participants correctly picked Giants-Patriots to advance.

Oh, and surprise, people!  Remember back in school when your teacher awarded you extra credit for following instructions?  I am hereby awarding Steve Nagrant (for predicting Giants-Niners to finish 27-21 when it finished 20-17), Ronbets (“Cruz comes out of the clouds to become premium receiver”), Hanahan (“Eli wills the Gents to victory late”) and Blog Surface (“Close game… somewhere in the 20s, but Giants pull it out”) five points each for taking the time to leave their spot-on analysis.  Nice work, gentlemen. 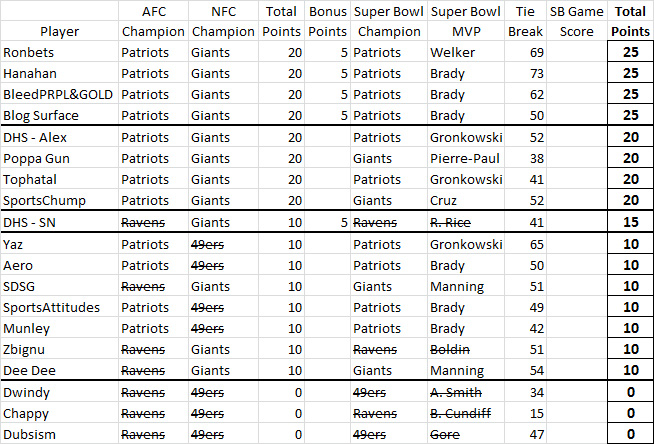