Soon after his retirement, basketball junkies everywhere craved the second coming of Michael, so much so that we dubbed every player after him who could jump out of the gym “The Next Jordan.”  We soon learned it took a little more than hops to become the next MJ.  Little did we know that athlete would come in the form of a golfer, not a basketball player. 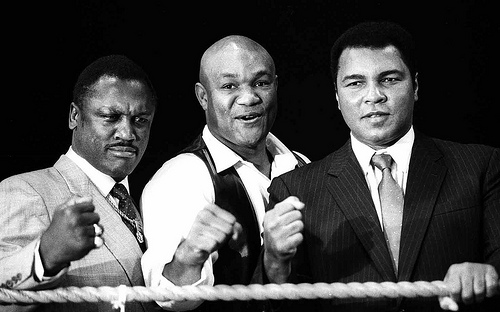 Similarly, we have griped endlessly about the sad state of professional boxing’s heavyweight division, waiting for the next great champion to come along, but those of us who grew up with the sweet science need not worry.  There’s a new triumvirate of heavyweight fighters whose matches rival the classics between Ali, Frazier and Foreman.  Their names are Nadal, Federer and Djokovic.

Whenever two of these three tennis superstars square off, it is riveting television.  In fact, these three are so dominant that only ONCE since 2005 has someone else won a major championship.  That’s 28 tournaments!  These days, their trivalry is as close as we have to professional prize-fighting, just without the gloves and tassels.  The fact that there’s no Don King in the mix is just an added bonus.  If you do tune in to watch them, however, don’t plan on being anywhere anytime soon.  Their matches last for hours on end, the tension rising with every groundstroke.

Dare I say, the Federer-Nadal rivalry, with a recent sprinkle of Djokovic to keep them both honest, is currently the best in professional sports?  It can’t be Red Sox-Yankees.  Those teams just spend money to reload and neither has met in a series of any significance in years.  College football powerhouses change every semester.  On top of that, realignment will soon make many traditional rivalries extinct.  It can’t be Tiger Woods-Phil Mickelson.  Tiger’s still struggling to win a tournament.  It can’t be Steelers-Ravens.  Neither of those teams is still in the playoffs.  It can’t be Lakers-Celtics.  Those rosters are aging before our very eyes.

No, it has to be these three.  Just when most of us thought Roger Federer was going to ride off into the sunset as the most, dominant tennis player ever, along came a spandex-clad Spaniard who has quickly amassed ten grand slam titles to Federer’s 16.  He’s also five years younger, giving him plenty of time to surpass Federer, assuming Djokovic doesn’t stand in his way.  With Sunday’s Australian Open victory, Djokovic, 24, now has five career majors, but has won four of the last five played. 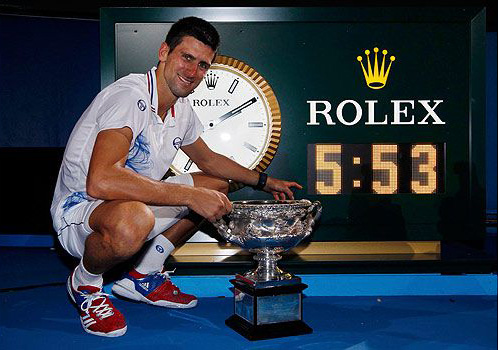 Friday’s Nadal-Federer semi-final match was another four-set gem, with Federer winning the first, but Nadal overpowering him the next three.  Two of the four sets went to tiebreak.  Djokovic-Nadal went five sets and lasted nearly six hours, the longest match ever in a major tournament final.

The legacy of these three superstars is still being written.  At 30, can Federer win another major with the other two at the top of their games?  Will Nadal eventually surpass Federer’s grand slam total?  How good can Djokovic become and can he repeat his incredible 2011, where he went 70-6, winning ten tournaments and three majors?

For those of you that long for the classic heavyweight bouts of yesteryear, don’t complain.  Just give tennis a shot.  These three might deliver a knockout blow you’re not expecting.

40 thoughts on “Who needs heavyweight boxing when we have Federer, Nadal and Djokovic?”