We interrupt this Masters update for a caption contest that simply could not wait.

Far be it from me to poke fun at those less fortunate, unless of course those people are married, multi-millionaire football coaches who can’t keep their pecker in their pants and end up getting busted for having an affair with a female employee twice their junior after, wait for it…. crashing their motorcycle while she was riding on the back of it.  At the end of the day, when they rank bone-headed moves, this one has to reside near the top.

University of Arkansas understandably placed head coach Bobby Petrino on administrative leave after they found out that… get this, Petrino failed to tell his athletic director she was even at the scene.  Oh, don’t worry about that injured girl in the ditch, officer.  She’s not with me.

The only pertinent questions that remain are will he be fired before Stan Van Gundy and was he wearing that neck brace at the press conference for sympathy or was it damage sustained after his wife beat the crap out of him for running around town with one of his interns?

Ladies and gentlemen, I not-so-proudly present to you this week’s caption contest.  The most creative caption will receive a Groupon for half-off motorcycle lessons, some first aid cream and one, unused Get Out Of Jail Free card. 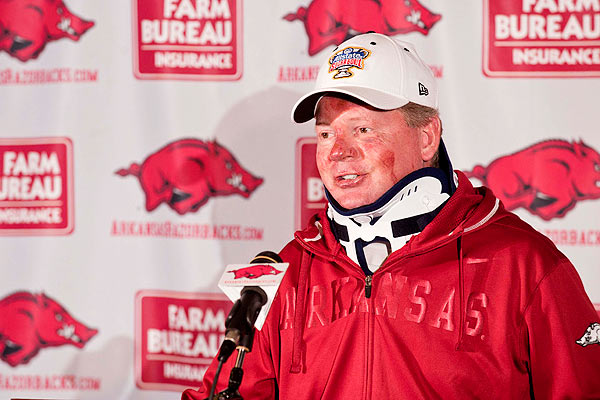