“In the history of professional team sports in America, there is no statistical equal of the Dipper’s hundred-point game, no other individual accomplishment in a single game so remarkable and out-sized.” 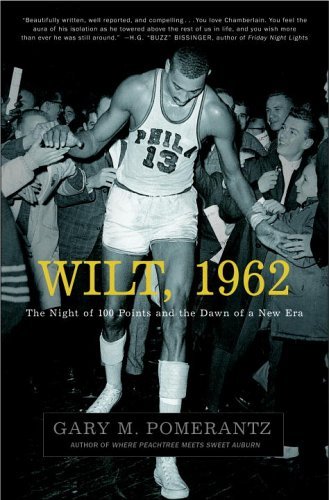 There are very, few legends in sports history.  In this day and age, we tend to throw around that word a little too casually, but when describing certain athletes, it suits just fine.  Ruth.  DiMaggio.  Clay.  Owens.  And of course, Wilt.

Similarly, some records continue to stand the test of time.  Wilt’s 100 point game remains one of those.

Such is the topic of Gary M. Pomerantz’ brilliant “Wilt, 1962,” a book any basketball historian will find hard to put down.

The book is an eloquent, history lesson of one special night in sports that has never, and likely will never, be duplicated.  Pomerantz interviews seemingly everyone that was in attendance that evening, disc jockeys, fans, vendors, former athletes, even teenagers who had snuck into the building lucky enough not to get caught.  Just like the game itself, his account reads as a fable that isn’t true.

Only 4,124 fans were in attendance at Pennsylvania’s Hershey Sports Arena that night.  This was back when the NBA was trying to grow its fan base, so teams would travel to smaller cities to play.  The few that were there witnessed history.  “So many others later wished they had been there to see the Dipper.  They wished they’d seen the great man glistening in the arena’s dim lights.  They wished they’d had the foresight to be in the smoky building… the night of his march into history.  But who knew?”  Pomerantz reminds us of every memorable sporting event we’ve ever been to, and those we wished we had. 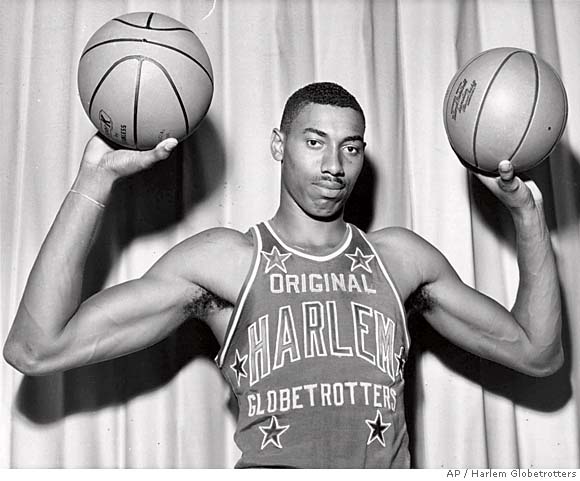 While the game serves as a backdrop for Wilt, 1962, the book is not strictly about the night Wilt scored one hundred.  Pomerantz covers his Globetrotter days (“the Globetrotters performed yuk-it-up comedy that white crowds, particularly in the South, found comforting and unthreatening”), his womanizing  (“a way to define himself, a way to keep score of his manhood and put a sheen on his celebrity”) and his stance on racism in the early 1960s (“beneath the veneer of public quiescence, the Dipper fought is own freedom struggle simply by being – aggressively, flagrantly, unapologetically – the Dipper.”)

He also breaks down his relationship with teammates, writing “there was something disquieting about Chamberlain.  It wasn’t so much that the Dipper thought himself a great player or that he was as great as he believed or even that he was great in a way they never could be.  He existed apart from his team, orbiting in his own glittery realm.”

Pomerantz even discusses poor Darrall Imhoff, who had the responsibility of covering Wilt that night; the Knicks starting center was out.  “Together their portrait in Hershey would be rich and symbolism: Chamberlain and Imhoff stood alone on the trembling tectonic plates of their sport.  One would change basketball, the other could barely hold one.”

The book also does a fair job of delving into Chamberlain’s persona, describing him as a man who didn’t want “to be considered a great player merely because of his size.  The Dipper sought to prove himself multi-dimensional.” 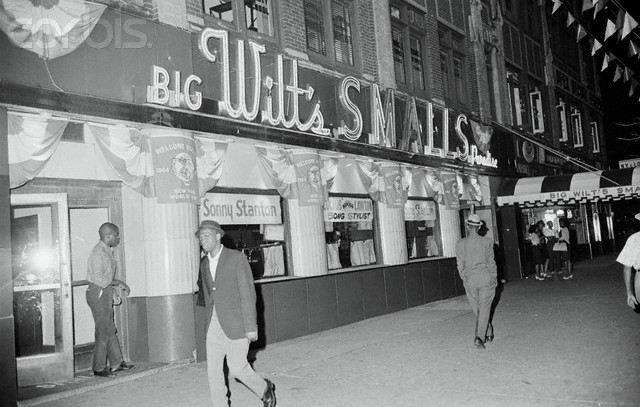 Not only does Pomerantz portray Wilt as a memorable sports figure, an icon, he also paints a picture of a more hip, yet still troubled, time in America, which makes Wilt, 1962 such an enjoyable read.  Wilt “loved Harlem, the neon, the ladies, James Brown, Etta James, Redd Foxx, a lush life with jazz the soundtrack.”   In the early 1960s, Chamberlain’s club Big Wilt’s Smalls Paradise attracted “a see and be-seen crowd, sophisticated, elite, and integrated.  If Philadelphia was his workplace, Harlem was his living room.  Each night in the NBA, the Dipper played for white owners and predominantly white crowds, but at… Big Wilt’s Smalls Paradise, surrounded by icons of black life in the lingering glow of Harlem glamour, whites came to him.”

The book flows like a work of fiction, which is somewhat symbolic considering the events of that night have become a thing of legend, as has the man it covers, something the Knicks were clearly unable to do that night.

The tale of Wilt’s magical evening makes you want to travel back in time.  With Pomerantz’s help, you do.