It’s the NBA Playoffs.  Tempers flare.  Players are already exhausted from an intense and accelerated season; they’re going to lose their cool.

So far we’ve seen Dirk Nowitzki and Kendrick Perkins go at it, Tyson Chandler throw a healthy backscreen on LeBron and Rajon Rondo chest-bump a referee.  But from my own, personal experience with inanimate objects, they generally win the battle against skin and bone. 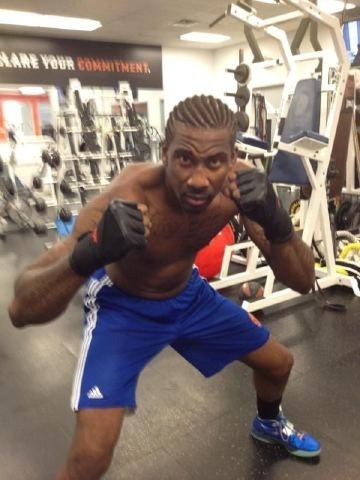 Stoudemire was a key cog of a Phoenix Suns team that consistently threatened in the West, but never got over the hump.  Now he’s in New York.

In his second year in the Apple, Amare’s Knicks find themselves on the verge of losing in the first round of the playoffs for the second straight season, last year to Boston, this year to Miami.  Apparently, in a fit of frustration after losing Game Two Monday night, Amare punched one of those glass-encased fire extinguishers deep in the bowels of American Airlines Arena, cutting his hand and leaving him out indefinitely.

Guess he wasn’t too happy about being down 0-2.  Or perhaps taking 25 fewer shots than teammate Carmelo Anthony in the two games they’ve played had something to do with it, but hey, that’s purely speculation on my part.

After the Amare story broke, the Twitterverse went rampant.  That’s what people on Twitter do.

So without being entirely insensitive to Amare’s condition, here are some of the Tweets I found entertaining, including a few of my own.

@SportsChump: When asked how the Heat were able to cool off New York, Amare pointed to a fire extinguisher as if to say, this is how. Just didn’t work out

@TheFakeESPN: Amare hit the Fire Extinguisher because it called him the “N-word” without pronouncing it the friendly black way.

@SuryaHeatNBA: C’mon Amare, everyone knows you’re supposed to use that little metal thingie hanging off to the side with a chain.

@SportsChump: Amare Stoudemire has had about as much luck with fire extinguishers as Tiger Woods has had with fire hydrants

@FauxJohnMadden: The Bobcats would lose by 27 to the fire extinguisher Amare Stoudemire punched.

@FakePatRiley: Amare cut his hand and everyone looked at Jeremy Lin, assuming he’s also a Doctor.