“I personally guarantee that the Cleveland Cavaliers will win an NBA championship before the self-titled former ‘king’ wins one.”

What are we to do now?

All that energy, all that wasted time and all that hate.  The what-if-he-doesn’t talk, the he’d-be-the-greatest ever-not-to conversations, all the meaningless, hypothetical jibber-jabber we’ve exchanged with friends and strangers over the years, every ounce of resentment we’ve ever uttered… gone, just like that.

And personally, I’m all the happier for it.  I even profited on it through sports betting.

Let me be among the first to say Congratulations, LeBron.  May you finally get a decent night’s sleep.  Enjoy raising that figurative, now ring-bearing, middle finger to all those who gave you crap along the way.  That has to feel as justifying as winning the ring itself.

Look through my record books.  Not once have I ever wished LeBron ill will.  Questioned his decision-making, perhaps?   Been guilty of accusing him of not living up to expectations, also possible?  But Michael-high expectations are tough to meet. 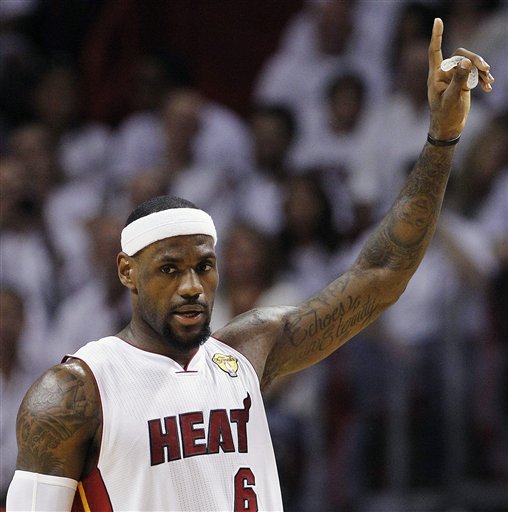 LeBron has his ring.

How can we perpetuate the hate?  After all, it’s what we do best, right?  Do we fault him for not having more?  Do we suddenly start piling on Kevin Durant?  Is that what we’ve resorted to as sports fans?  Picking apart the losers rather than celebrating our champions?  Even in victory, the haters emerged.  Durant was fouled at the end of Game Two.  Westbrook didn’t get enough calls in Game Four.  Miami couldn’t have done it on its own merit.  What, I ask you, is wrong with us?

Despite its hasty, and apparently surprising, outcome to the majority of you who thought Oklahoma City would win this thing, these NBA Finals were riveting, every game but the last highly contested.

But now it’s over and the question remains, what now?

I’ll give Clevelanders a pass, but the rest of you better find something else productive to do with your time as that whole “not five, not six, not seven” promise is at least one step closer to fruition.  Or maybe he won’t win another and we’ll once again ask why the hell not.  Like it’s any business of ours to not analyze, but criticize.

The bulk of us have spent so much time picking apart this man’s every move and rooting for him to fail, that now it’s finally time for us to reap what LeBron has sown… and that’s the last laugh.

56 thoughts on “LeBron has his championship ring. Now what?”