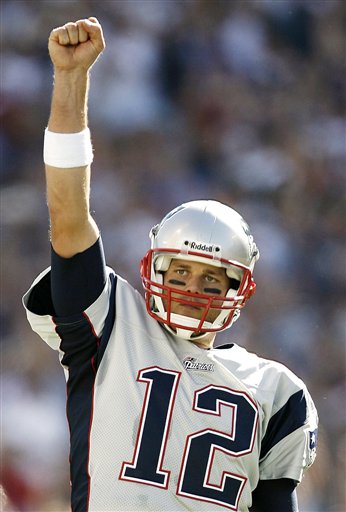 There are two schools of thought when it comes to NFL eliminator pools.

For those of you who don’t know, when it comes to sports betting, eliminator pools are perhaps the most entertaining way to gamble on the NFL season.  Each week, participants choose one team to win that particular Sunday.  There are no point spreads.  All your team has to do is win.  If they do, you advance but are unable to pick that team again for the rest of the year.  If they lose, you’re done for the season while your friends play on.  Last man standing wins.

Now… back to the two schools of thought.   One is survive and advance.  There’s no sense saving good teams like the Patriots, Packers or whoever happens to be solid that year, for the later weeks.  Pick ‘em early and move on.  The opposing school of thought prefers to save the dominant teams for the later rounds when you might need them.

I adhere to the first school of thought.  If the Packers or Pats are up against what’s as close to a sure thing as possible, I’m taking them.  There are no guarantees you’ll even make it to the later rounds, so pick and pick wisely.

Something similar happened in the Ukraine on Wednesday, some six thousand miles away, where nary an NFL fan exists. 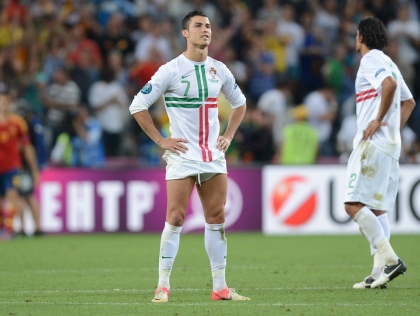 I’m no soccer expert but I’m pretty sure if I managed a team that featured the best player in the world, I’d want him on the field.  Not so much in Portugal’s case.  At the end of two overtimes, with the scored tied at zero, Spain and Portugal lined up for penalty kicks with a trip to the Euro 2012 Finals on the line.  High stakes soccer.  As it turned out, Ronaldo, perhaps the game’s greatest player, did not shoot a PK for Portugal.

Since I don’t really follow soccer, I don’t know whether it was the coach’s decision or Ronaldo’s own to slate him fifth, where it was certainly possible he might not be needed, just like saving the Patriots for Week 17.  Hours after the decision, many of us remained dumbfounded, unsure why Ronaldo was slated last.  In the end, he didn’t get to shoot at all.  Spain scored their fourth of five kicks, eliminating the need for Ronaldo to even line up.  Anywhere else in the world, coaches get fired for this… or worse.  As we’ve learned, in certain parts of the globe, soccer screw-ups are not taken lightly.

As a result of this inexplicable Portu-gaffe, Spain advanced to the Euro Finals, the foot of the game’s greatest player remaining unused and the tear ducts of millions of Portuguese welling with emotion. 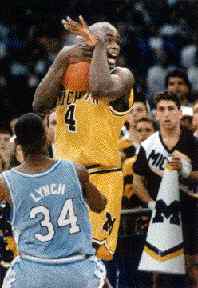 I asked my most knowledgeable, soccer fans friends (all three of them, this is the United States after all) how something like this could come to pass.  They were all “pretty sure” Ronaldo could have taken that fourth shot with his country down three penalty kicks to two.  But he didn’t.  If I were Portuguese, I’d be pissed.

I’ve tried to compare the Ronaldo situation to other bone-headed moves in sports history.  McNamara not replacing Bill Buckner with Dave Stapleton in 1986, Chris Webber calling a time out with none left in the 1993, Leon Lett trying to pick up an icy football on Thanksgiving Day that same year and the Detroit Lions opting to kick off rather than receive in overtime in 2002 all came to mind.  But none compared to not having your best player on the floor in crunch time.  It would be like Erik Spoelstra deciding not to play LeBron in the waning minutes of a Finals game.

Heads will probably roll in Portugal as soccer analysts will try to make sense of what transpired, likely blasting both Ronaldo and the coach.  If someone can make some sense out of this, please let me know as surviving and advancing is generally more my style.

28 thoughts on “Eliminator pools, penalty kicks and a bunch of pissed off Portuguese”