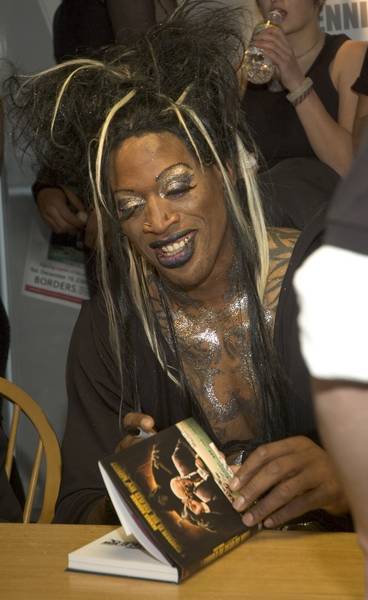 I read somewhere that Dennis Rodman is putting out a children’s book.  More power to him.

I’m not necessarily saying that the Madonna-tutored, ex-bad boy, who once traveled the nation with his own bartender, dyed his hair every different color of the rainbow and kicked an NBA cameraman in the groin on live television ISN’T the least likely of candidates to speak to America’s youth.  I’m just saying if I were a parent, I probably wouldn’t bring my four-year old to the book signing, unless of course, it was open bar.

Rodman getting in touch with his inner child inspired me to think of the least likely book titles we’d ever see.

Fasten your seatbelts and if you’re easily offended, please turn away.

Gambling is Bad by Michael Jordan

How to Hit for Power by the Tampa Bay Rays

The Art of Passing by Carmelo Anthony

Staying Faithful to Your School: An Urban Meyer/Nick Saban Collaboration

The Art of Not Fumbling by Adrian Peterson

Driving in the City by Jason Kidd

Frugality by the Steinbrenners

Winning in the SEC by Vanderbilt

Winning in the Post-Season by Tony Romo

Silence is Golden by Rex Ryan