I like hanging out in places that have girls.

Don’t get me wrong.  I enjoy a night out with the boys as much as the next guy, but can you imagine hanging out with nothing but dudes all the time?  That doesn’t sound like much fun to me.  It’s why people leave bars at 1:30 in the morning, because the proper ratio of women to men has dwindled down to zero. 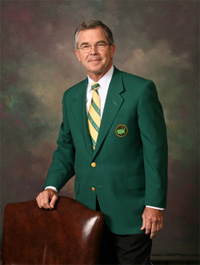 Now I’m sure after spending a glorious spring, afternoon strolling Augusta National with Hootie Johnson, the course’s former chairman, not chairperson, he’d be able to break down the golf course’s rich tradition, show you the Eisenhower Tree, and even somewhat convince you they were justified for never, not once in the club’s eighty year history, enrolling a member of the opposite sex.  Perhaps they’ve been allergic to females all this time.  Or maybe they genuinely couldn’t find one ‘worthy’ of their little club.

Well, the times they are a-changin’.  Black people can now sit at restaurant counters, gay couples can marry and women can become members at Augusta National.  Stand up, America, and take a bow.  It only took 400 hundred years for us to understand the true meaning of that whole ‘all men are created equal’ credo.  The snail’s pace at which this country crawls to respect one’s human rights amazes me, but better late than never, I guess.

So why dredge all this up?  Well, in case you hadn’t heard, former Secretary of State Condoleezza Rice and South Carolina financier (that means she’s rich) Darla Moore were just allowed membership to our country’s most elite golf club, becoming the first females to ever do so.  There goes the neighborhood.

Personally, I can’t wait for the healthy ribbing; the cooking and cleaning jokes should be a real hoot.  Remember when Tiger Woods became the first African-American golfer to win at Augusta in 1997?  That victory was followed up by Fuzzy Zoeller suggesting Woods would choose fried chicken and watermelon at the tournament’s Champions dinner the following year.  Classy.  Fuzzy received some flack for that, but far too many wrote it off as Fuzzy being Fuzzy, turning their heads while he shouted from his secluded, Augusta balcony, white hoods tucked neatly away in their closets.  I mean, seriously, with all the things that have been covered up in sports lately, steroids, child abuse, game-fixing, would it surprise anyone at this point if card-carrying members at Augusta happened to be card-carrying members of another considerably less savory organization?  Besides, like Dave Chappelle once said, if you don’t like fried chicken and watermelon, there’s something wrong with YOU. 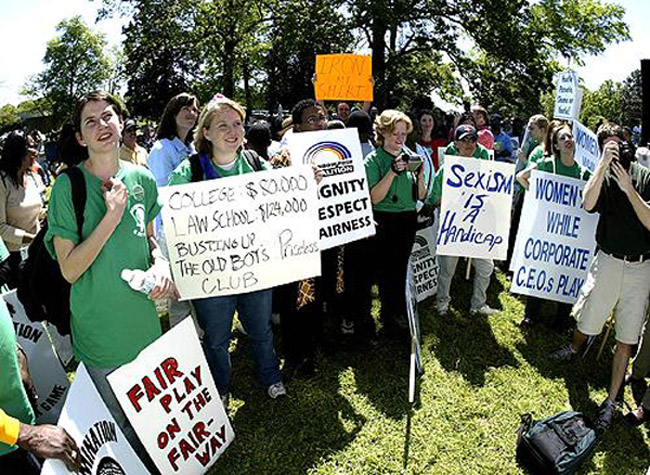 I’ve been to Augusta twice.  I’ve never felt all that uncomfortable walking its grounds, probably because I’m white.  It really is a beautiful place but the sensible part of me always wanted to resent it for some reason, for only allowing members they felt fit the bill, and yes, that had far more to do with race and gender than anything else.  Augusta didn’t allow their first black member until 1990.  In 2002, Martha Burk made a pretty big stink, protesting the tourney for their lack of female membership.  The overwhelming maleness of this club became an issue once again this year when the CEO of IBM, Virginia Rommety, attended the actual tournament.  Not only is IBM one of Augusta’s biggest sponsors, its last four CEOs, all males obviously, were extended invitations to join.  Not yet for Rommety.

Look, it’s okay to have a club.  It’s even okay to discriminate in certain instances.  We had a Dungeons and Dragons club back in the eighth grade.  We wouldn’t allow anyone in who didn’t know how to play the game.  But we didn’t do so based on the color of their skin or the fact that they had breasts.  Even in the eighth grade, we knew better.

Perhaps it’s time for the rest of us to grow up as well.