As the old philosophical question goes, if a tree falls down in the woods and nobody’s around to hear it, does it make a sound?  Common sense tells us it’s a tree.  It fell down.  Of course it made a sound.

Similarly, if Lance Armstrong won seven, consecutive Tours de France between 1999 and 2005, yet is suddenly stripped of those titles, did those races actually happen?

This latest news, shocking to some, inevitable to others, and draining to all, came across the wire late Thursday evening.  The U.S. Anti-Doping Agency (USADA) will strip Armstrong of his titles after the man, once considered the most dominant cyclist to ever slip on spandex, decided to no longer fight the charges.  As a result, Sports Illustrated’s 2002 Man of the Year will be banned from cycling for life.  Don’t feel bad, Lance.  Joe Paterno, Mark McGwire and Sammy Sosa also won that award.  Besides, nobody reads that magazine anymore anyway.

So where does this leave us?  For the longest time, Lance got a hall pass.  His case is unique in that, unlike Barry Bonds and Roger Clemens whose careers were also marred by drug use, Armstrong eventually got tired of the legal battles.  Also unlike Bonds and Clemens, people actually like him.  Even though none of us gave a damn about cycling, we revered Armstrong as a national hero and cancer survivor. We always presumed his innocence, or at least we wanted to.

All we know for sure is that, for nearly a decade, Armstrong was the baddest thing on wheels, just like we know that Reggie Bush was college football’s greatest player in 2005, the year he won the Heisman that is no longer in his possession.  We also know Penn State University won 111 football games between 1998 and 2011.  For varying reasons, the record books will reflect none of these accomplishments.

Since the Melky Cabrera drug suspension, we’ve talked quite a bit lately about stiffening penalties for drug users and whether numbers should also be stricken.  Most agree Cabrera should be ineligible for the batting title, but does it even matter?  Just like the tree crashing in the forest, those hits happened.  What would taking them away even mean? 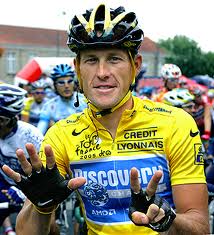 I think we’re all just numb at this point, yet the drug debate rages on with no answers in sight.  What now for Lance?  Does he pedal off into the sunset with his empty trophy case and used collection of Sheryl Crow CDs, doing the occasional endorsement for whoever will sign him and continuing to dedicate himself to cancer research?

How has our perception of him changed?  Is he still a national hero or is his legacy tainted?  Was he unfairly targeted?  Is USADA the bad guy or is Armstrong guilty as charged?  How do we handle every other sport with a drug problem: baseball, boxing, mixed martial arts, football, the Olympics?  Someone get Nancy Reagan on the phone.  Do we ramp up drug-testing and the penalties associated with failing one, or do we just give in?  Like Lance.

I get where Lance is coming from.  He’s as over it as we are, the accusations and the negativity.  When it’s all said and done, he has only himself to answer to.  But as sports fans, what we’re left with are races that never happened, games never played and records that were never broken.  But they did.  We watched them.  It’s as if we’re supposed to learn some invaluable lesson from all this but we’re still unsure what that lesson is.

Either way, the Armstrong ban is just another dark stain for sports and in its aftermath, the rest of us are just waiting for the next big tree to fall.

48 thoughts on “Armstrong strong-armed, banned from cycling for life”