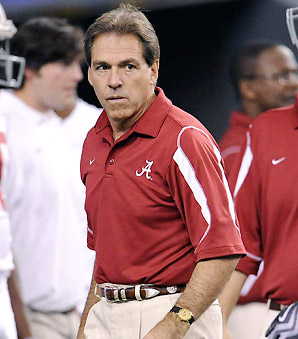 This is hard for me to say considering I’m a Gator alum but Nick Saban is, without a doubt, the man.  This is a guy who has won three national championships at two different schools.  This is a man whose Alabama team embarrassed a defending national championship Florida team in the 2009 SEC Championship Game, making Tim Tebow cry in the process.  This is a man who, despite the rigors of coaching college football at its highest level, still looks pretty damn good for being sixty years of age.  And most importantly, this is a man who demands our respect, although he probably couldn’t care less whether he has it or not.

In a recent press conference, the cool, collected Saban combined one part Mike Gundy, one part Herm Edwards and three parts Yoda to put basically every journalist in the room in their place, killing them with kindness but killing them nonetheless.

After Alabama’s beat down of previously number four ranked Michigan, every analyst from here to Tuscaloosa was ready to award Alabama another national championship, but as Saban promptly reminded everybody, that’s simply not how it works.  There are games to be played, practices to be held, routes to be perfected and most importantly, expectations not to be exploded.

You have to think coach would be happy if he never read another sports page in his life and have his players do exactly the same.  What he was asking from those who cover his game, and his team, was a little journalistic integrity and to not blow smoke up his team’s skirt while he’s trying to a) win ballgames and b) mold young boys into men.  Nor does he want the media belittling Alabama’s opponents regardless of a twenty-seven point victory or a forty point spread.  He’s not the first coach to do so and he certainly won’t be the last. 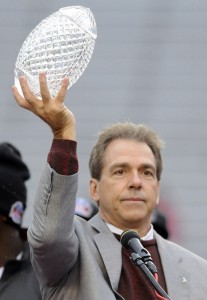 He’s right too.  It’s all fine and dandy to make predictions and have our meaningless pre-season rankings.  That’s what we do.  But according to Saban, and probably every other coach in college football, that’s counter-productive.  Saban’s not nearly as eager as the rest of us to crown his team the best in the land, not until he’s holding that crystal trophy high over his head, barely managing a smile as if his lips have never formed one before.

If Saban can do his job with integrity, Miami Dolphins faux pas aside, then perhaps it’s okay to expect the same from his players, and most certainly those writing about them.

Of course, in the end we all know Saban is asking for too much.  At least from the journalists.

38 thoughts on “Once again, Nick Saban tells it like it is”