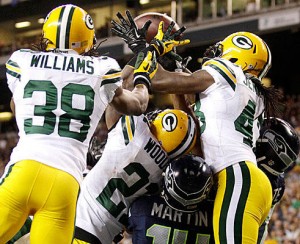 The controversial ending to Monday night’s Packers-Seahawks contest got me thinking, as it did most football fans, but not about how replacement officials have negatively affected this NFL season.  It’s safe to say we can all agree the return of the zebras is a good thing.

It’s what happened after the game that started this alternate train of thought.

Please bear with me.

Immediately after the game ended, SportsCenter dedicated its entire post-game broadcast, and countless hours afterwards, to discussion of the catch, interception and offensive pass interference call that weren’t.

As newscaster after alleged newscaster began blasting the outcome of the game, putting replacement officials and the league’s choice to employ them in their place, using superlatives like “catastrophic” and “disgraceful” to describe the final play, I started thinking about the changing way sporting events are covered in this country, by one network in particular, as if they are trying to personally champion the cause to get Ed Hochuli and company back to work.  I also started thinking of the fines that were about to be levied on outspoken NFL players, and the discrepancies between what some are allowed to say and others aren’t, when it comes to criticizing the game and the way it’s being officiated.

It got me thinking how paid journalists, at least those on ESPN, no longer “report” the news, but rather give their opinions, in this case, all of them negative and pressing for change, which is probably not the way Edward R. Murrow  or Walter Cronkite intended the medium to be.  ESPN’s ticker has gone from a scrolling parade of scores and stats, to using language like Yankees “rout” Jays or Sox “blow” lead, instead of simply saying Yankees 10 – Jays 2.  Thanks for the vocabulary lesson but I’m pretty sure if I see a 10-2 final, I can determine for myself the game got out of hand.  But of course, the four-letter is free to do as they please, just as I’m free to determine its method of reporting the news has become horrifically slanted.  At SportsChump.net, I don’t tell you what to think, I tell you what I think and allow you to make your own decisions, whether we agree or disagree. 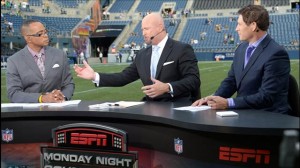 Sure, guys like Jon Gruden, Steve Young and Trent Dilfer, former coaches and players, are paid to voice their opinions, but other members of the media are not.  In that sense, ESPN has become as much a parody of itself as the NFL.

The outcome of the Monday night game and its coverage also got me thinking about the manner in which professional sports leagues control the speech of their athletes, coaches and fans who took to Twitter and other social networking venues to give Roger Goodell a cyber-spatial piece of their mind.  For the next few days, the NFL will pay people to sift through Twitter with a fine toothcomb, calculating exactly how much to dock its employees for stating what all of us already know, that the thousands of dollars the league is refusing to pay its licensed officials might end up costing the sport millions.

The backlash from Monday night’s botched call, and the coverage of it, will continue on, as will the fines levied on those who openly expressed their sentiments.  I can see an assistant walking into Goodell’s office with a stack of Tweets from those berating the call, with the commissioner responding “Just fine ‘em all $25 grand!”  As Packers guard TJ Lang suggested via his Twitter account, they can fine him and then “use the money to pay the regular refs.” 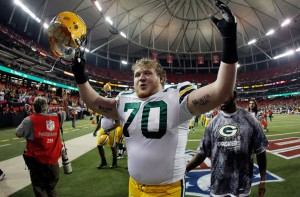 Lang wasn’t the only player to express those opinions.  Teammate Greg Jennings said all he can do is “laugh at the #NFL for allowing America’s game to come to this.”  Even those not playing Monday night chimed in.  Reggie Bush tweeted “These refs gotta go, I’m sorry.”  Drew Brees chimed in with “I love this league and love the game of football, but tonight’s debacle hurts me greatly. This is NOT the league we’re supposed to represent.”  NFL analyst and former Super Bowl MVP Troy Aikman tweeted “These games are a joke.”

The wise ones, like Mike McCarthy and Aaron Rodgers bit their tongue in the post-game press conference but yesterday, Rodgers had had enough, apologizing to the fans for the product that’s being put on the field. Keep that calculator handy, Goodell, you’re gonna need it.

But is that even fair?  Should league representatives not be allowed to speak their minds, professionally, when a questionable call adversely affects, not only the outcome of that game, but perhaps the opportunity to host a home playoff game that would have brought millions of dollars into the local economy, not to mention home field advantage and increased odds of winning a Super Bowl?  Sure, they are employees and have to do their best to represent the shield but aren’t they left wondering whether that’s what the league itself is actually doing?

Again, yes, we all want the regular officials back.  That goes without saying.  But some of us also want the news reported impartially and not a long line of “journalists” eager to force feed us their opinion.  We’d also like to see players express themselves without being penalized more than they, and the fans, already have been.