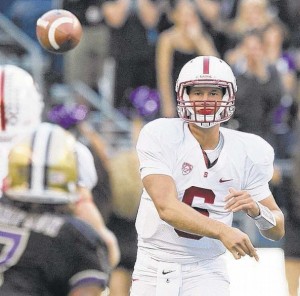 The Stanford Cardinal are coming off of their first loss of the season, but they have had a long week of preparation to get ready for their upcoming challenge on Saturday afternoon at home against the Arizona Wildcats.

Stanford’s defense has been excellent this year, allowing just 316.5 yards per game, good for 25th in the nation. No team has scored more than 17 points against the Cardinal this year, but in fairness, save for the USC Trojans, no team has an offense nearly as dynamic as Arizona has.

The offense though, has been atrocious. QB Josh Nunes is under the gun and is on the verge of being replaced as the team’s starting quarterback. Stanford is good for just 326.2 yards and 26.0 points per game.

Arizona meanwhile, has had absolutely no problems moving the football. Scoring at times has been an issue, knowing that both the Toledo Rockets and Oregon Ducks held the Wildcats down on the scoreboard. However, the QB Matt Scott has thrown for over 1,600 yards this year, and he is leading an offense that is putting up 538.2 yards per game.

If there is good news for the Stanford defense, it is that the Wildcats have been held down to just a total of 27 points over the course of the last two seasons in this series. The Cardinal are 2-0 SU and ATS in those games, and they are 7-2 SU and ATS in the last nine overall dating back to 2001.

Stanford has some bad news in this game though, and that’s that the college football odds are moving against it. The Cardinal opened up at -12 ½ over the weekend, but that number has since dipped to -9. The ‘total’, which opened at 57, has dropped down to 54.