We haven’t had a good caption contest in quite some time, so here goes nothing.

I absolutely love having Yahoo as my homepage.  They consistently come up with stories that keep me entertained.  In case you missed it, their latest headliner was of a tanning session gone awry.

As most of you know, I live the Sunshine State where I’m routinely amazed that so many tanning salons remain in business.  Seriously, they’re everywhere.  Now, I have some good friends that run a tanning salon (and quite a few who frequent them… ugh!) so I’m going to choose my words carefully.  Let’s just say, it’s a business I’d never invest in, especially in Florida where it is 90 degrees for ten months of the year and the nearest beach or pool is a stone’s throw away.  But we like what we like, and some of us like to be orange, so who am I to judge?

Either way, this poor schmuck below has apparently been abusing his tanning privileges.

At the Arnold Classic 2012, this guy, whose name Yahoo did not release in the article, strutted his stuff on the catwalk, bikini briefs and all, flexing his biceps, triceps and pectorals, for the entire world to see.  The only problem is… he’s two-tone.

So put down those beach towels and warm up those imaginations, sports fans.  Show me what you got for Mr. Tan Man down here.  The winner of this week’s caption contest will receive one free bottle of Hawaiian Tropic SPF 50 and one slightly used, yet still incredibly stylish, banana hammock. 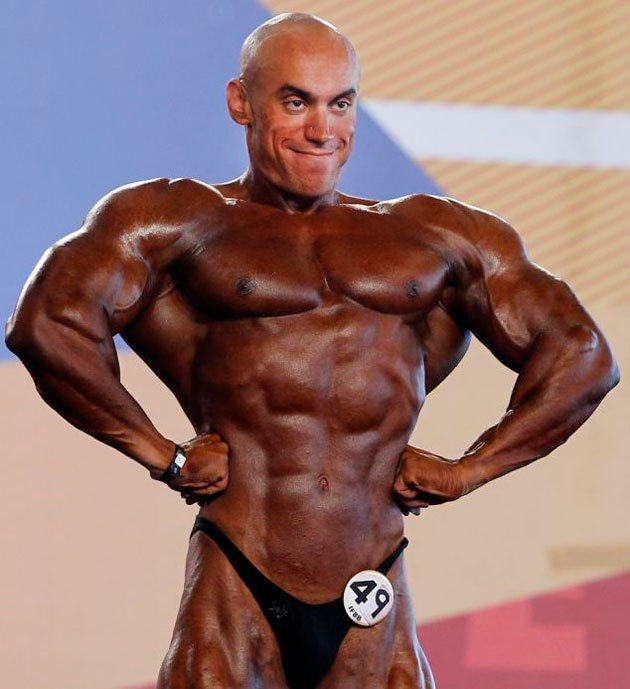