I saw two things this Sunday that I can’t say I’ve ever seen before, three if you consider the fact that the Buccaneers had a home game televised.

On a gorgeous, Florida, Sunday afternoon, the Tampa Bay Buccaneers had their hands full against perhaps the greatest 1-4 team in NFL history: the New Orleans Saints.  The Saints have had their fair share of issues lately, with Spygate, suspensions and what most impartial observers believe to be Roger Goodell’s total bumbling of his own judiciary process.

That being said, Goodell and the league made it up to them on Sunday, with a little help from Buccaneers head coach Greg Schiano.

Don’t get me wrong.  I don’t mean to stand here on my homer soapbox and say the Buccaneers were robbed had it not been for this call or that but… the Buccaneers fell victim to two calls in particular, one which led to a Saints touchdown and another that prevented a Bucs touchdown from happening.  Such was the difference in the game.  In a seven point contest, the number of points which the Bucs are losing most of their games this season, these things matter.

Thing I’ve Never Seen Before #1:  In the fourth quarter of a highly competitive contest, leading 28-21, New Orleans lined up for a 51-yard field goal after the Buccaneers had stopped them defensively.  Tampa’s special teams lined up yet shifted their position in an effort to distract the snap.  All of a sudden, whistles were blown and flags were thrown. 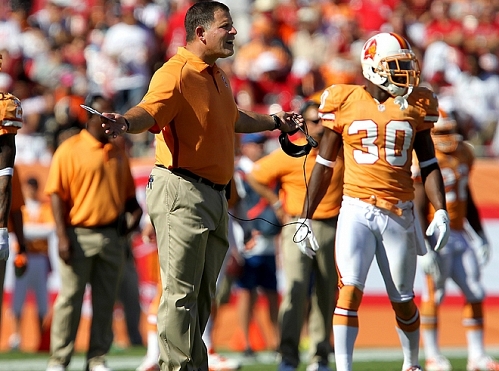 Unsportsmanlike conduct called on the Buccaneers, pre-snap, before the ball was even hiked.  The refs penalized Tampa Bay fifteen yards, giving the Saints back the ball and the inevitable, momentous touchdown.

I’ve been watching football for a while now.  Most unsportsmanlike penalties occur either during or after a play and are generally the result of excessive celebration or taunting which, in the NFL, has to be pretty flagrant considering what players do after touchdowns these days.  According to Schiano, he used that very same defensive shift against the Redskins earlier this season and a penalty was NOT called but according to Rule 12, Section 3, Article 1i, a team is not allowed to use “acts or words designed to disconcert an offensive team at the snap.”  Now either the refs were doing their job a little too well or this is a rule that Schiano needs to become more familiar with.  Ah, the joys of being a rookie head coach in the NFL.  If no penalty is called, there are no seven points for the Saints, perhaps not even three considering the distance of the field goal attempt.

In his explanation of the rules, former head of officials and current Fox Sports analyst Mike Pereira took a shot at Schiano on live TV saying things like that might fly at Rutgers, but not in the NFL.  Schiano also got panned by the national media with ESPN’s Michael Wilbon calling his antics “college rah-rah stuff.”

Thing I’ve Never Seen Before #2: At the end of the game, with only seconds remaining and the Buccaneers down by seven, Josh Freeman and the Buccaneers matriculated the ball downfield (that’s football talk) and scored what appeared to be the game-tying touchdown as time expired.  The only problem is Freeman’s intended receiver, Mike Williams was pushed, er… had stepped out of bounds, thereby making him an ineligible receiver. 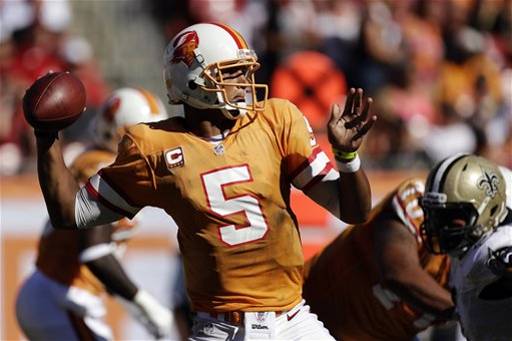 Once again, according to Pereira and the NFL rule book, since Freeman was rolling out of the pocket, it was legal for the defensive player to shove Williams out of bounds, hence no offensive pass interference call.  Williams was no longer allowed to be the first person to touch the ball, which, by all logic, is exactly what a wide receiver is supposed to do on pass plays: be the first person to catch the ball.  Ludicrous is not just the name of a platinum-selling rapper.

Look, there were plenty of ways the Buccaneers could, and perhaps should have won that ball game.  They had a 95-yard pass play to Vincent Jackson who, according to my Buccaneers fact-checker, now holds the distinguished record of having the longest play in NFL history that did not result in a touchdown after he was caught from behind at the goal line by the much swifter Malcolm Jenkins. After said play, Tampa Bay was unable to punch it in from the Saints one-yard line four consecutive times, turning the ball over on downs.

Schiano turned beet red while giving the refs a piece of his mind during the game yet was cordial in his post-game press conference, refusing to lash out at the officials yet still clearly unhappy with the calls he felt cost his team the game. 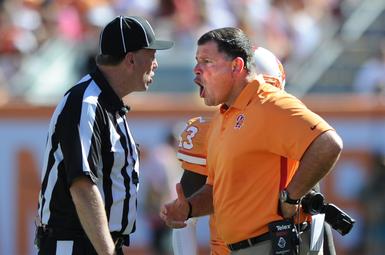 The rookie head coach from Rutgers is quickly making enemies around the league ever since the infamous Coughlin incident where he instructed his players to crash into the opposing Giants linemen as they kneeled down in victory formation with seconds left on the clock.  His decisions are perceived as collegiate by some, tone-setting by others.  Either way, he still only has two wins under his belt and those came to two of the worst teams of the league, Kansas City and Carolina.  Unfortunately for the Tampa Bay Buccaneers, the Cleveland Browns are not walking through that door any time soon.

Schiano and company have a short turn around. They now must face the Vikings on Thursday.  They might want to consider bringing a copy of the NFL rule book with them  because at this point, it doesn’t look like they’re going to get any help from the zebras.