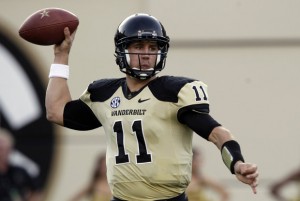 The Vanderbilt Commodores are a 4-4 team that need to find their way to two more victories this year if they have dreams of going to a bowl game. On the other side of the field on Saturday afternoon is going to be the Kentucky Wildcats, who are just 1-8 and really look like they are just dead in the water.

It’s not all that often that the Commodores are favored on the college football odds on the road, but they are laying a touchdown against easily the worst team in the SEC this year.

Kentucky knows that it is really just playing out the string at this point. Head Coach Joker Phillips is almost certainly going to be fired at the end of another unsuccessful season, and the time is here to see what the future of football here in Lexington will look like. That’s why QB Jalen Whitlow is essentially being thrown to the wolves as a starter as a freshman at this point. Whitlow has thrown for just 444 yards, and he has one touchdown pass against two picks thus far early in his career.

Unfortunately for Whitlow, Vanderbilt has the fifth ranked pass defense in the nation this year, allowing just 151.0 yards per game.

The Commodores are going to be deploying a bruising back in RB Zac Stacy as well. Stacy has had some real success here in the SEC this year, rushing for 683 yards and accounting for five touchdowns. What really makes Stacy a threat though, is the idea that WR Jordan Matthews could break a big time play at any given point.

Of the 1,690 yards that the Commodores have passed for as a team this year, Matthews has 775 of them, and he has three touchdowns as well. WR Chris Boyd has 29 catches, 541 yards, and a TD to boot, and these two make up one of the most feared receiving tandems in the conference even though they play for a team that would much rather just run the football over and over again.

Kickoff from Commonwealth Stadium is set for high noon on Saturday.